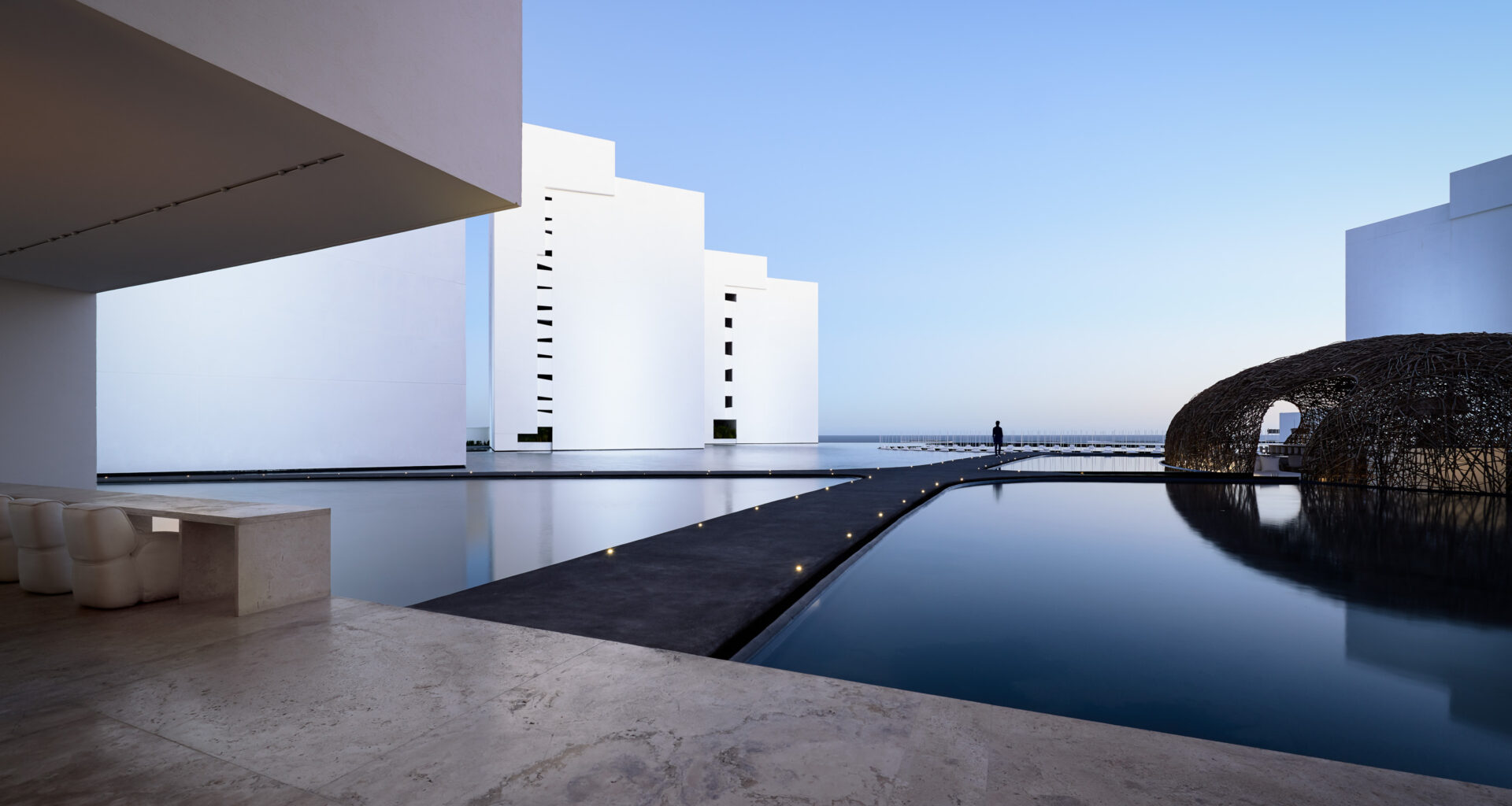 Miguel Angel Aragonés-designed Hotel Mar Adentro in its Own Universe

Both Hotel Mar Adentro and architect Miguel Angel Aragonés are revelations in their respective realms, and the same can be said of a site that captured the imagination. Behold the modern masterpiece that it became.
Total
0
Shares
0
0
0

The Rigorously Minimal Hotel Mar Adentro is a Universe of Creation Like No Other, by an Architect of Equal Vision and Conviction

If Hotel Mar Adentro looks like a set piece from a sci-fi epic, this is not because of its reasonable proximity to Hollywood. The modern architectural masterpiece is a product of its home country, located in the Colonial Mexico resort beach town of Los Cabos and conjured in the extravagantly gifted mind of Mexico-born and based architect, Miguel Angel Aragonés.

“The first time I visited this property and took in the desert and the diaphanous, clear water running along a horizontal line in the background, I felt the enormous drive of water under a scorching sun,” Miguel Angel Aragonés has noted.

“This piece of land, located in the middle of a coastline dotted with ‘All Inclusives,’ would have to be transformed into a box that contained its own sea—practically its own air—given the happy circumstance that the universe had created a desert joined to the sea along a horizontal line. It was the purest, most minimalist landscape a horizon could have drawn. On either side, this dreamlike scenery collided with what humans consider to be aesthetic, and build and baptize as architecture. I wanted to draw my own version, apart from the rest.”

It took an ambitious program to realize this vision. And a vision it is too. Mar Adentro is as remarkable as its setting is spectacular, one that is of a paradoxical nature, with desert, sea and sky offering a raw, primitive beauty. Combined with the physical composition of the architecture, marked by stark, unambiguous white, the hotel asserts itself as a canvas for the depth of Miguel Angel Aragonés’ inclinations and a strong aspirant for the rarefied pantheon of architecture that is highly attuned to feeling.

“I believe that the greatest virtue of architecture is the generation of sensations through space on a series of planes that are found within the realm of sensitivity,” Aragonés offers.

“I believe this capacity becomes still greater when your surroundings allow you to meld into them, forming thus part of your own space; in this sense, I wanted to take that horizon and bring it into the foreground.”

In so doing he harnessed the elements to significant aesthetic and functional advantage.

“The water is an event that borders the entire project all of the volumes open up toward the sea and turn their backs on the city, which is all that remains of the original surroundings, burdened by noise.”

Calling an everyday element an “event” is not hyperbole; Miguel Angel Aragonés’ appropriation of water is essential to the fluidity throughout the project. In this the architect made the immovable feel like movement itself.

“Mar Adentro is a kind of Medina that opens out onto the sea. Each floating volume contains interiors that form, in turn, independent universes. Each room visually contains a piece of the sea; no one can resist gazing out at it.”

There is plenty to see inside the hypermodern hotel, as well. Perched at the centerpiece of the place—a vast, contemplative pool—is a restaurant shaped as a bird’s nest that offers a textural response to the smooth reflective surround, from the water to the sharply angled, white-washed concrete.

Featuring lines meant to mirror the linear horizon, the complex of structures hold the guts of the hotel, including an array of fine restaurants, an art gallery, a shopping center, and a spa and beach club on three sides. The fourth side was left open to the sea.

Also enclosed within the architecture are 200 guest rooms in a serene, Scandi-infused style of creamy tones, wood accents, and no unnecessary touches. These spaces also express a sense of geometry, and are, as formed, essentially large frames of the sea views just beyond large panes of glass. The mood is Mexico of the modern-day melded with a Far East feeling of calm.

The drama at Mar Adentro comes at night, when its flotilla of forms is lit up in a brilliant display, transforming the hotel into a luminescent paint box of blue and purple shades that alights on its colonial enclave with the thrust of the future. Even one’s guest room, if so desired: accommodations featuring color controls to present a bigger rainbow of shades. This gesture supports the larger example of bold, remarkable modernism that is Mar Adentro itself, and its maker still another.

Even after long and studied appraisal of Mar Adentro, the eye grapples with what the mind cannot rationally hold. The desire is to see the architecture as something beyond this earth. Yet of the earth it is, though perhaps not entirely.

Explore Story
For success to be sustained, it must always evolve. At Kaminsky Real Estate Group, the agent’s longtime base camp, there’s been a beefing up of marketing staff. “It’s to better serve our seller clients,” Kaminsky says, “but it dovetails into taking care of our buyer clients. It will snowball into really great things for both sides.”
0
0
0
Explore Story
A company tied to Vancouver Canucks co-owner Francesco Aquilini is selling a revamped 1950’s Mid-century Trousdale Estates home…
0
0
0
Explore Story
Blowouts, lashes, and make-up—oh my! An all-in-one beauty lounge opens in downtown Manhattan Beach Written by Joclene Davey…
0
0
0
Explore Story
A new stay, play and work alternative debuts in Culver City While establishing office buildings to meet the…
9
0
0