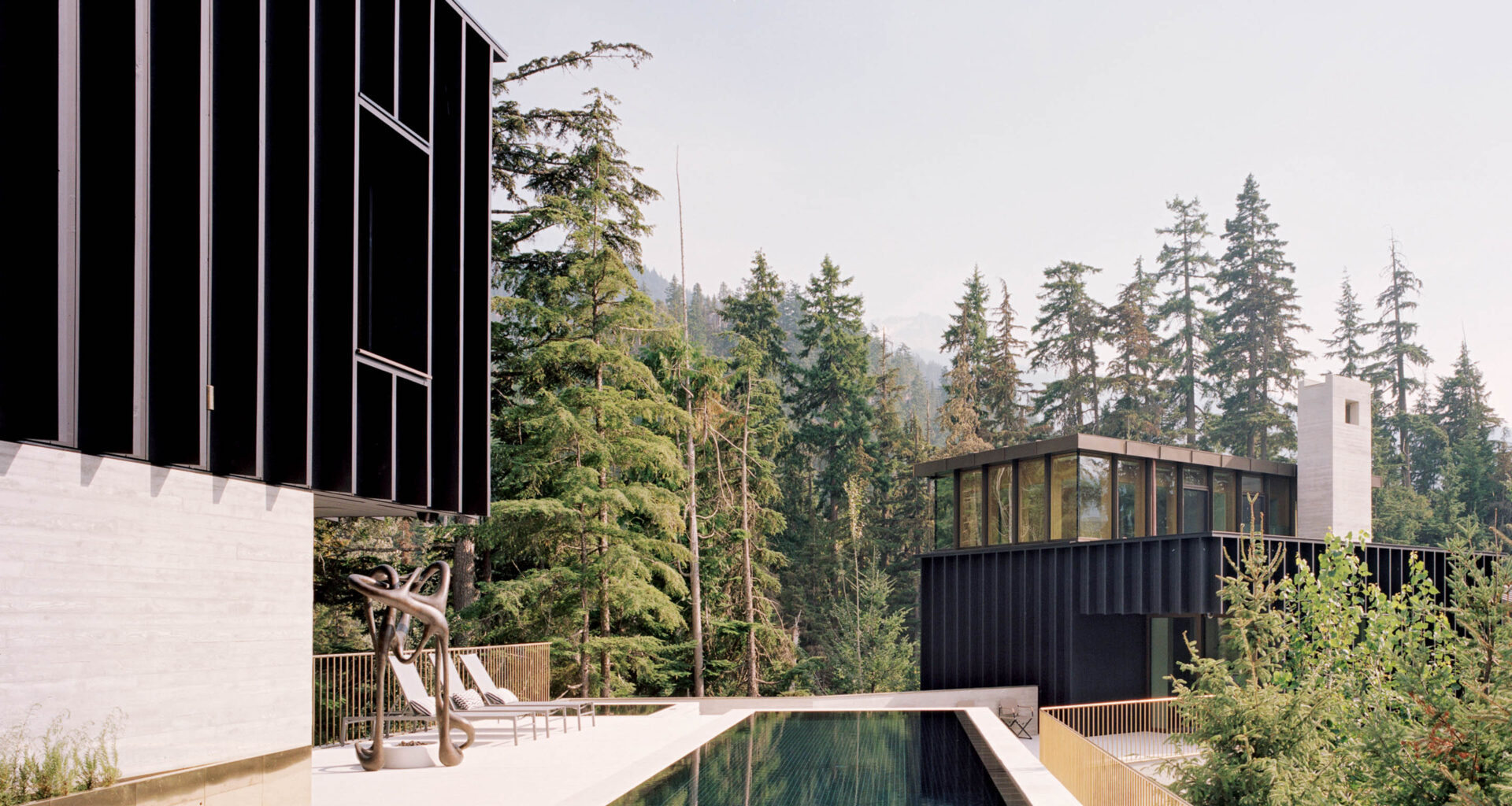 Fixed to a rocky crag above Alta Lake in the Canadian mountain resort of Whistler, a truly exceptional private house surveys the mountainous landscape from which it is quite literally inseparable.
Total
0
Shares
0
0
0

Fittingly named The Rock, this newly built family home eclipses mere possibility with its actual presence. Why dream the impossible when it is here— the summit of ambitious, vision-driven design from London-based architectural practice Gort Scott.

With viewpoints and exposures throughout, the project is a physical manifestation of Gort Scott’s architectural ethos, which is very much centered on creating connections between individuals and their environments. The Rock is an elevation of this idea. Not just for the obvious fact that the house is cut and built out of the mountainside, but more boldly as a response to its glorious, tree-laden location.

Taken with the site, the owner found the property and planned at some point to build a house there—a house quite unlike anything he had built before.

He had, after all, strong feelings about what he wanted, which was, as put by the practice, an “architectural expression of self” via a design embodying “individualism, tranquil strength, respect for nature, simple beauty, privacy, and crucially, a harmonization of contradictions.”

Boldness and simplicity, openness and enclosure, intimacy and exposure, among them.  In taking a chance on Gort Scott, a younger architectural practice, the client’s faith was rewarded with a thoughtfully imagined, audaciously designed expression of the landscape.

Rising from a series of landscaped levels, the project is comprised of a six-bedroom house and a two-bedroom guest house, connected by an outdoor terrace. Constructed primarily of concrete, with some timber cladding, the house fans out in stepped levels meant to mirror the experience of navigating mountainous terrain.

Organized at the crest of the rock, the fluid, light-filled living, kitchen, and dining spaces are the focal points of the main residence and also act as points of entry onto terraces overlooking the lake and bathing in a lovely evening light. The upper level houses a bedroom wing that revels in the filtered morning light, and the top floor study, finally, soaks in 360-degree views. A cinema room, gym, wine room, utility, and service area make up the structure’s subterranean spaces.

“The experience of moving around the main house is likened to the experience of walking up the hill to the crest of the rock prior to the construction of the house,” the practice notes.

“Each room and use within the house is strategically located according to key views from and towards the site, solar orientation, natural contours of the land, location of the surrounding trees, and the creation of a picturesque walk to and through the site.”

In using the guest house to mark the entrance of the site, the architects employed a detail influenced by “the tradition of small gateway buildings used as a key part of the composition of large houses by architects such as Luytens and Schinkel.”

Situated at the lowest point of the site, this structure shares access to the infinity pool with the main house, furthering the dialogue between buildings.

The contemporary interiors are unapologetically minimal, emphasizing the views and interacting with natural light that highlights a textural interplay of soft textiles and polished timber as well as interior finishes and bespoke fittings designed by Gort Scott. The way the light plays off the concrete is particularly mesmerizing, and integrated fireplaces lend warmth to the interior, which is more contemplative than austere and uniquely inviting for family. It is, in fact, the decorative restraint in the interior that allows its materiality to flourish.

That the house—which was engineered to respond to the extreme weather of its environment and outfitted with climate control strategies—is thoughtfully contextualized is a credit to Gort Scott’s painstaking observations of the site before it was so honestly transformed.

“Gort Scott’s design evolved from a deep appreciation of the site’s natural beauty, which was explored at the outset through time spent on-site in different weather conditions and times of the day; sketching and observing the changing light,” the practice explains in its program notes.

“The views of the lake and mountain ranges afforded from the vantage point were also carefully recorded and modeled, the individual trees assessed and mapped for their significance and implications for enclosure or framing views.”

In the end, The Rock is a house of extraordinary location and consideration on the part of Gort Scott. The practice really did think about it all—deeply, insistently, and comprehensively—to ultimately design an architecture that exploits its magnificent surround. Anyone can see: the view from above is beautiful.

Explore Story
Sold Last Year for a Whopping $90 Million, the Historic Owlwood Estate Relists at Twice the Price Just…
0
0
0
Explore Story
Even by Studio Rick Joy’s standards, Tubac House is of uncommon stature. Located south of Tucson, roughly 25 miles from the northern Mexico border, the project exploits and explores a relationship to worlds both immediate and distant.
0
0
0
Explore Story
It’s true that Los Angeles County offers many beautiful homes within its vast expanse. But for the discerning…
0
0
0

Explore Story
In Los Angeles, good word of mouth plays an important role in the decision to hire an architect or an interior designer. Certainly, that was the case when it came to sussing out the perfect design-build firm, XTEN Architecture, to create this home in West Hollywood’s coveted “Bird Streets.”
23
0
0