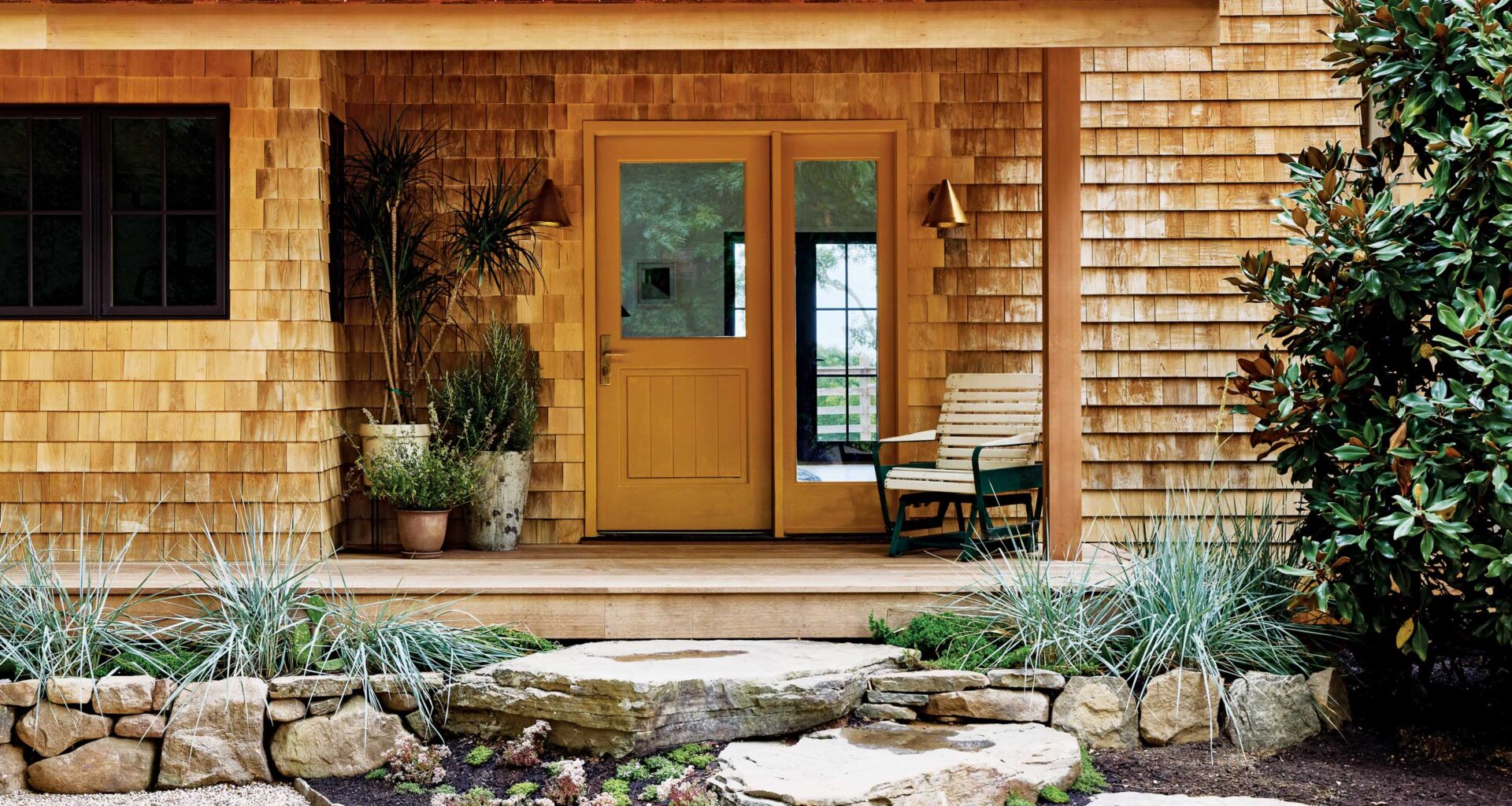 Originally built in 2005 and located in Montauk, New York (a half-mile from the local beach and a short walk to the state park), the Edison Bungalow started its new life in August 2020.
Total
8
Shares
0
0
8

This was when Robert McKinley—the founder and creative director at Studio Robert McKinley—and his partner and wife Kate Nauta purchased the property to make it their fourth rentable and “shoppable” concept.

After one year of work, it is now available for rentals. The duo drew inspiration from the traditional New England Cedar Shake design to transform the 4,200-square-foot space—which sits on 1.6 acres of pristine landscape and comprises five bedrooms and 4.5 bathrooms—incorporating natural materials such as rattan, linen, and wood, while also including some of their favorite vintage finds.

“Because the interiors of the house had not been updated since it was built, it was in need of renovations to refresh the overall style of the house,” remembers Robert McKinley.

“The more drastic makeover was done to the kitchen and bathrooms.”

With an organic pool that blends into the natural topography, the landscaping scheme was also completely changed. The front porch was updated, a new roof was added, and the windows and doors were replaced, among other changes.

“We cleaned up the older, existing decorative profiles in the home in order to create room for contemporary pieces,” explains Robert McKinley.

“Everything feels more down-to-earth this way, and allows for the bones of the property and the materiality to shine through.”

The Northeastern palette and connection to the sea came naturally and resulted in the use of materials that offer natural tones and textures, such as stone and pine wood. These were mixed with pops of color, including the glossy “National Geographic yellow” front door; the Yves Klein-blue painted stools, and sea green floor in the kitchen; as well as the bathroom showers, checked with ochre and stone white tiles.

“We worked with Heath Ceramics to outfit the kitchen backsplash with their incredible Stan Bitters tile, which I love—it is sculptural yet rugged at the same time,” says Robert McKinley.

“The lime-washed walls from Domingue Architectural Finishes also give rooms an amazing texture and accent. A more hidden design detail is that we actually used teak rails from an old sailboat for the Gaggenau refrigerator handles, which paired perfectly with the Reform cabinets.”

Filled with Studio Robert McKinley’s favorite products (most of which are available for purchase to fit the “shoppable” concept and invite guests to take a piece of their vacation home with them), the project features brands such as The Shade Store, Duravit, Emtek, EQ3, Floyd, Great Jones, HAY and Lucetta Lighting, to name only a few. Artworks by names including Peter Sutherland and Michael Manning complement the look.

“We imagined artists, adventurers, and personalities in and around Montauk, New York throughout history like Peter Beard, Julian Schnabel, The Rolling Stones, and Jacques Cousteau, all coming together creating and exploring the waters and coves in and around the East End,” says Robert McKinley.

The Edison Bungalow presented its own set of challenges, in particular, due to its big size, providing the designer with the opportunity to embrace the individuality of this project.

“I was pushed to look at how to make a larger house seem welcoming without compromising the design,” Robert McKinley confesses.

“This allowed me to look at the Bungalow design with a whole new perspective and pushed me to think outside the box in terms of what color schemes, aesthetics, and furniture styles I would incorporate into a multilevel home versus a ranch-style home.”

“The Bungalow could be best described as vibrant yet intimate,” says Robert McKinley.

“We included elements that give the home that natural, warm, lived-in feeling by using vintage pieces that we acquired from flea markets. There is still a contemporary feel to the space, however, through splashes of colors.”

When it comes to interior design, balance is key and Robert McKinley knows (and masters) it.