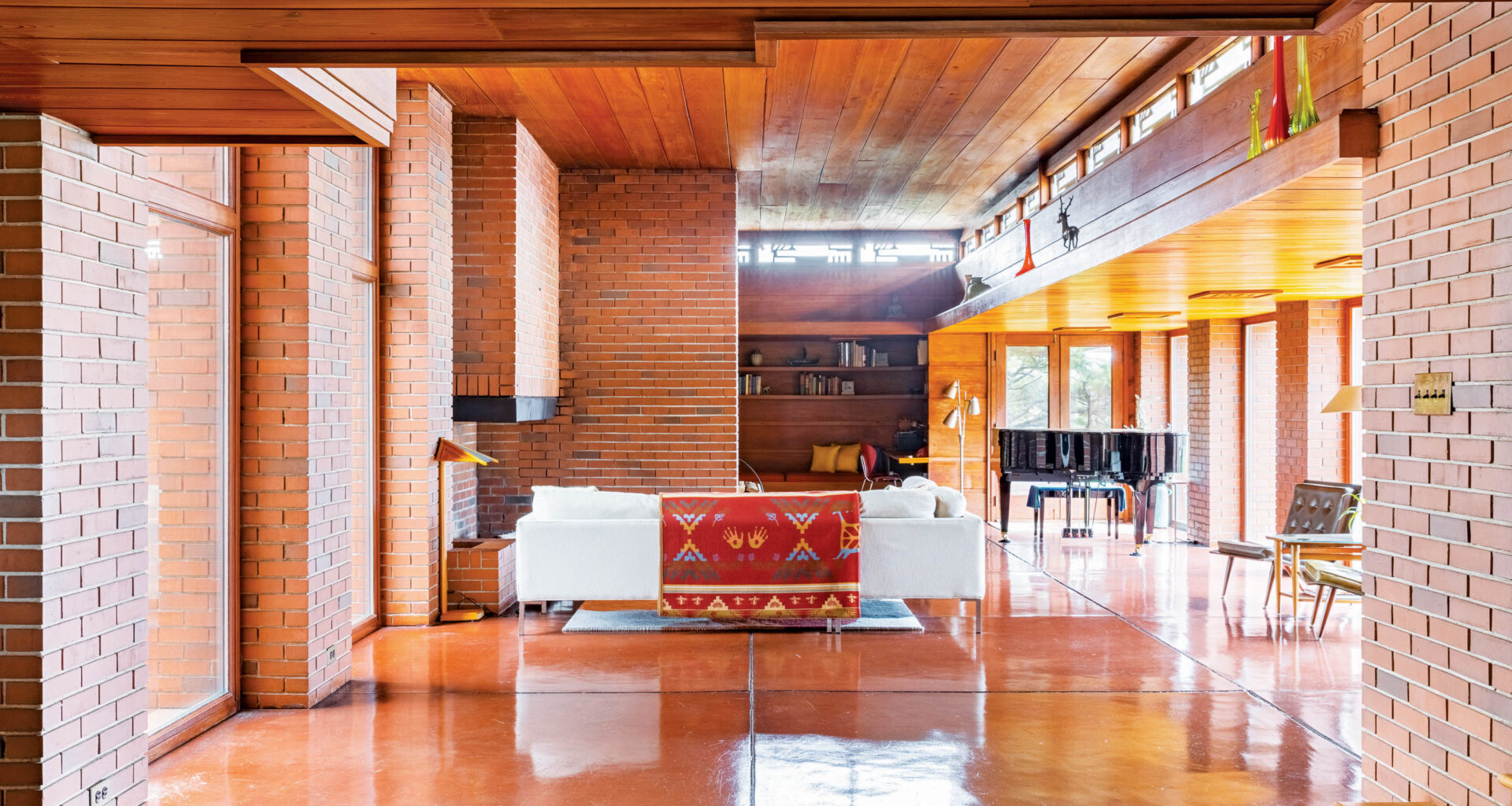 One of the most prolific periods in his 70-year career came when American architect Frank Lloyd Wright was bucking all odds. Besieged by scandal and liberated from convention, the sun never seemed to set on the eccentric man, and by the 1930s, decades after he graced Chicago, Illinois, with the Robie House, he had completed Hollyhock House in Los Angeles, Fallingwater in Pennsylvania, and Taliesin West in Arizona.

In this era, the Prairie School pioneer also completed the first versions of his pre-war Usonian houses, a new form of low-cost, well-built family dwellings he envisioned to be constructed at scale, transforming the American landscape. Only 60 Usonian structures were built, but they proved foundational, inspiring the ranch-style houses that would eventually blanket suburbia.

Of the Usonian homes that remain (a murky number, at best), the Bernard and Fern Schwartz House—or Still Bend, as Frank Lloyd Wright named it on his original plans—is located in Two Rivers, Wisconsin.

Made of natural materials, with overhanging roofs and glazed sheets of glass, the horizontally orientated home makes good use of the natural light that floods its interior and highlights Wright-designed details throughout. Uncharacteristically for a Usonian structure, the warm-toned Still Bend has two stories, not one, further defining the house as unique.

Constructed of red brick and red tidewater cypress, with red concrete floors and light-capturing floor-to-ceiling windows with views to a broad lawn just beyond, Still Bend is a pure expression of Frank Lloyd Wright’s design principles. He called it a natural house, by which he meant a form of organic architecture of which he was both promoter and practitioner.

Frank Lloyd Wright’s philosophy of creating buildings in harmony with nature was, he said, “the modern ideal.” Carefully integrated with its setting, the intentional, open-plan Still Bend is a splendid case in point, a “little private club,” as Wright described it, “with special privacies, ultra conveniences and style all the while.”

The house fans out in a T formation, with the main living area, kitchen, and dining area on the ground floor forming the stem and the three bedrooms and two baths on the second marking the crossbar. The free-flowing scheme bears Frank Lloyd Wright’s distinct hand, explicitly so in elements such as the dual fireplace, which functionally separates the living room from the den; in customary Wright fashion, however, one does not detect any division between these spaces.

Nor does one miss the architect’s fastidious attention to detail. The stairwell might be just another point of transition, for example, were it not for the wood that wraps around the wall to blend seamlessly into the red brick. Large and small alike, Wright’s deliberations add up, creating a cohesive undercurrent throughout.

That Still Bend presents as a kind of Still Life is not surprising—a work of great architecture is also a work of art. To that end, however, is restraint. Keeping with Wright’s vision of a new-world domestic life for middle-income America, the house is an uncluttered affair, but not free of decorative flourish. Like in his other projects, Wright outfitted the house in his own designs, producing all types of furnishings, from chairs and low tables with indigenous motifs to beds, built-ins, and fruit bowls—all inventions of form and function.

Interestingly, for the 75th anniversary of the house, the owners finally built a Wright-designed light fixture that the Schwartz family never bothered to make; now flanking the fireplace, this design is a radiant representation of his scrupulousness. Wright’s penchant for geometric shapes and repeated abstractions are on show, too.

Frank Lloyd Wright also seized on the interplay of light and shadow for Still Bend. Not in the stained glass of the dwellings he designed for the well-to-do clients of his Prairie School period, but in a more Usonian offshoot of the same idea. The patterned coverings for clerestory windows and lightboxes he created allow natural light to flow inside the house while at the same time casting interesting configurations on the walls.

As a testament to the house, the Schwartz family lived at Still Bend, which is listed on Wisconsin State Registry of Historic Places, until 1971. After purchasing the property in 2003, the current owners lovingly restored the house and opened it to the public. By virtue of its architectural purity and the visionary architect behind it, Still Bend has much to recommend it.

By no means did the house need help from Netflix to put it on the radar, but that’s exactly what it received when the streaming service featured the house on season 2 of its show “The World’s Most Amazing Vacation Rentals.”

Frank Lloyd Wright’s “Dream House” is now a reality for architecture enthusiasts across the globe.

Explore Story
A testament to pastoral beauty and American progress, Shelburne Farms is a grand 19th century estate built with…
0
0
0

Explore Story
A contemporary take on traditional Chinese courtyard house by Neri&Hu, a typology based on Confucian ideals where different generations live under the same roof, the structure was built for three siblings, with a memorial garden in tribute to their late mother.
0
0
0
Explore Story
Idyllic and peaceful, the natural landscape on which this 3,600-square-foot contemporary home sits is one of the elements that makes the project unique.
0
0
0
Explore Story
Only 100 miles from Los Angeles, Palm Springs is the ideal weekend destination for those who seek respite from urban life, providing an environment where the beauty and peace of the desert are an invitation to contemplate.
0
0
0