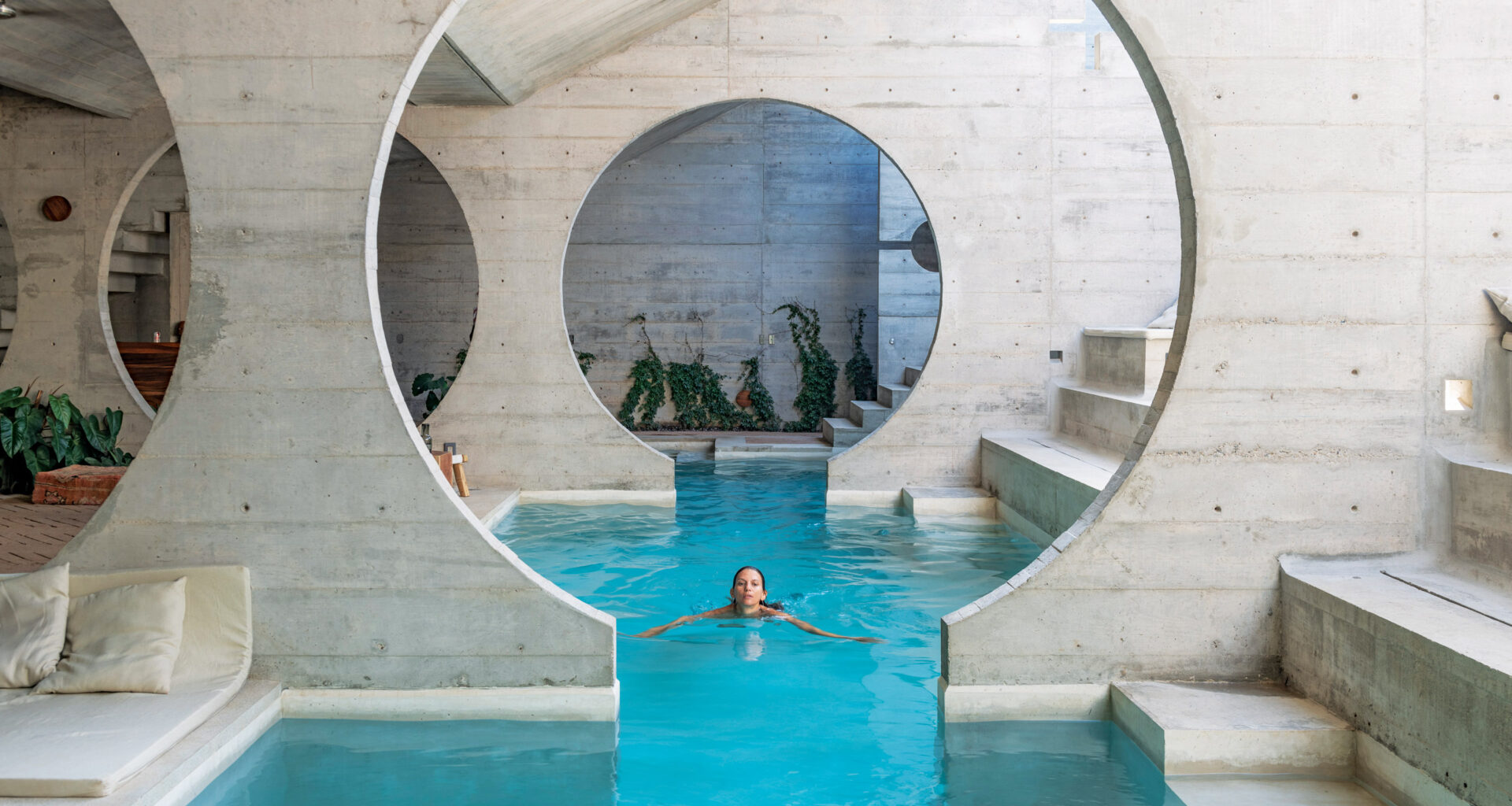 This cleverly abstracted concrete oasis by architect Ludwig Godefroy is a bold reinterpretation of an ancient Oaxacan temple, fusing tradition and modernity with seclusion and exposure for something not as much built as sculpted.
Total
0
Shares
0
0
0

In an Oaxaca, Mexico Beach Town, a Sublime Work of Minimalist Architecture by Ludwig Godefroy Explores the Relationship Between the Solid and the Void

In peaceful La Punta Zicatela, located in the Mexican state of Oaxaca, Casa TO bathes not only in the golden sunsets of a surfer’s paradise but also in the glow of its standing as the most architecturally interesting boutique hotel in town.

Casa TO is hardly the country’s first flirtation with concrete; Mexico‘s fidelity to the raw material calls to mind the work of beloved son Luis Barragán and Japan‘s Tadao Ando, whose concrete art campus Casa Wabi, another Oaxacan retreat, is a much-Instagrammed sensation. It is, however, plenty worthy of following—all the way to the southernmost point of Puerto Escondido.

In designing the two-story boutique hotel—a hybrid of tradition and the avant-garde—one presumes that the French-born, Mexico-based Ludwig Godefroy was at least partially motivated by what many of us have long considered: Does Mexico really need another discotheque-to-death megahotel? Manifestly no.

Of modest scale, the architect’s elegantly simple concept is a striking rethink for the by-the-beach hospitality scene: private and musing, with a pretty unforgettable pool and a bent toward eco-consciousness and social responsibility. This is not a building found on every block—not in Mexico, not anywhere—but a building born from blended inspirations.

Taking its name from the idea of “serene contemplation of an enclosed space,” as put by the property, Casa TO “evokes the reticulated pattern of two historical hydraulic works of timeless beauty: the Basilica Cistern or Yerebatan Sarayi of Istanbul, dating from the 6th century AD, and the Hornsey Wood Reservoir in Finsbury Park, London, built in the 19th century. The interplay of privacy and exposure is evident. The interior views create an oasis enclosed by the sky, the weight of the walls and the vegetation of climbing plants and fruit trees including bananas and passion fruit. In this area, measuring 600 square meters, Ludwig Godefroy interweaves aesthetics and functionality, emphasizing the honesty of the textures of the raw materials, such as concrete, steel, clay, and wood.”

At its heart is the project’s covered infinity pool and solarium.

“The former alludes to the vaulted volumes and the signature style of Le Corbusier with rectilinear lines, exposed loadbearing walls, lightweight structures, and open-plan interiors.”

The divisions of the terraced solarium, meanwhile, provide privacy. An adjacent volume houses a modest but memorable offering of unfussy, minimally finished suites: those on the ground floor enjoy gardens; upper-level offerings showcase a terrace and outdoor bath.

Transversal walls and circular cuts of raw concrete and temple-like steps—the most conspicuous nod to ancient Oaxacan building traditions—are all defining features of the architecture. The latter element, a stairway to heaven no matter how one slices it, guiding guests from suite to water or suite to rooftop, also serves the more impromptu purpose of providing seating or a place to sunbathe.

The architecture flourishes when greenery is left to scale exterior walls and sheath exposures in a kind of picturesque privacy shield. As a form meets flora homage to its context, Casa TO trades on the tropical setting at every turn, embracing nature as a bridge between indoor and outdoor thresholds.

Vibrant green vegetation against grey concrete revitalizes the eye even as it refreshes the spirit and also helps to soften the strong profile and hard edges of the architecture’s heavier, more durable surfaces. The result is a living, thriving environment—the most alluring expression of a concrete jungle.

Having beauty at its back door liberates the minimalist interior from superfluous oversteps. The sparse, open-plan interior design borrows—not extravagantly, and most noticeably in the natural tones of the materials and the nuanced use of yellow, blue, and green hues—from its naturally textured surround.

A pattern of an existing Madagascar Blue Bismarck palm tree on the site, for example, informed the project’s stripped-down decorative scheme, if “decorative” can be applied. A busier and less-localized interior might not draw the eye where it should be: on lamps by Natural Urbano studio, bamboo pieces by Tiago Solís Van Beuren, and furniture built by master carpenters from Puebla, Guadalajara, and Oaxaca.

Each element of Casa TO—from the work of artisans and Mexican design studios to plant-infused products to the setting itself—roots the structure firmly to its place. Though the structure is soundly of its time, as well, even as one traverses the temple-inspired terrace steps and thoughts turn to Mexico’s sky-high archaeological ruins.

This is a temple, too—to honest, unambiguous contemporary architecture. A new dawn for a work inspired by an older age.

Photography by Jaime Navarro (@jaimenavarros_estudio) for Casa TO (@casato)

Explore Story
In the heart of Wilmington—Delaware’s largest city—The Quoin Hotel is a one-of-a-kind hotel that takes visitors on a journey through time while remaining firmly rooted in the present.
0
0
0

Explore Story
With its minimalist rectilinear form clad in charred shou sugi ban rain screen siding, the house by Annie Barrett & Hye-Young Chung contrasts with the San Pedro cacti and other kinds of vegetation that welcome the inhabitants and their visitors.
0
0
0
Explore Story
It’s been a busy week for Jennifer Caras. Lately, her days have been filled with appointments, meeting with eager house hunters. “It’s been so busy,” says the Beach Cities real estate agent.
0
0
0