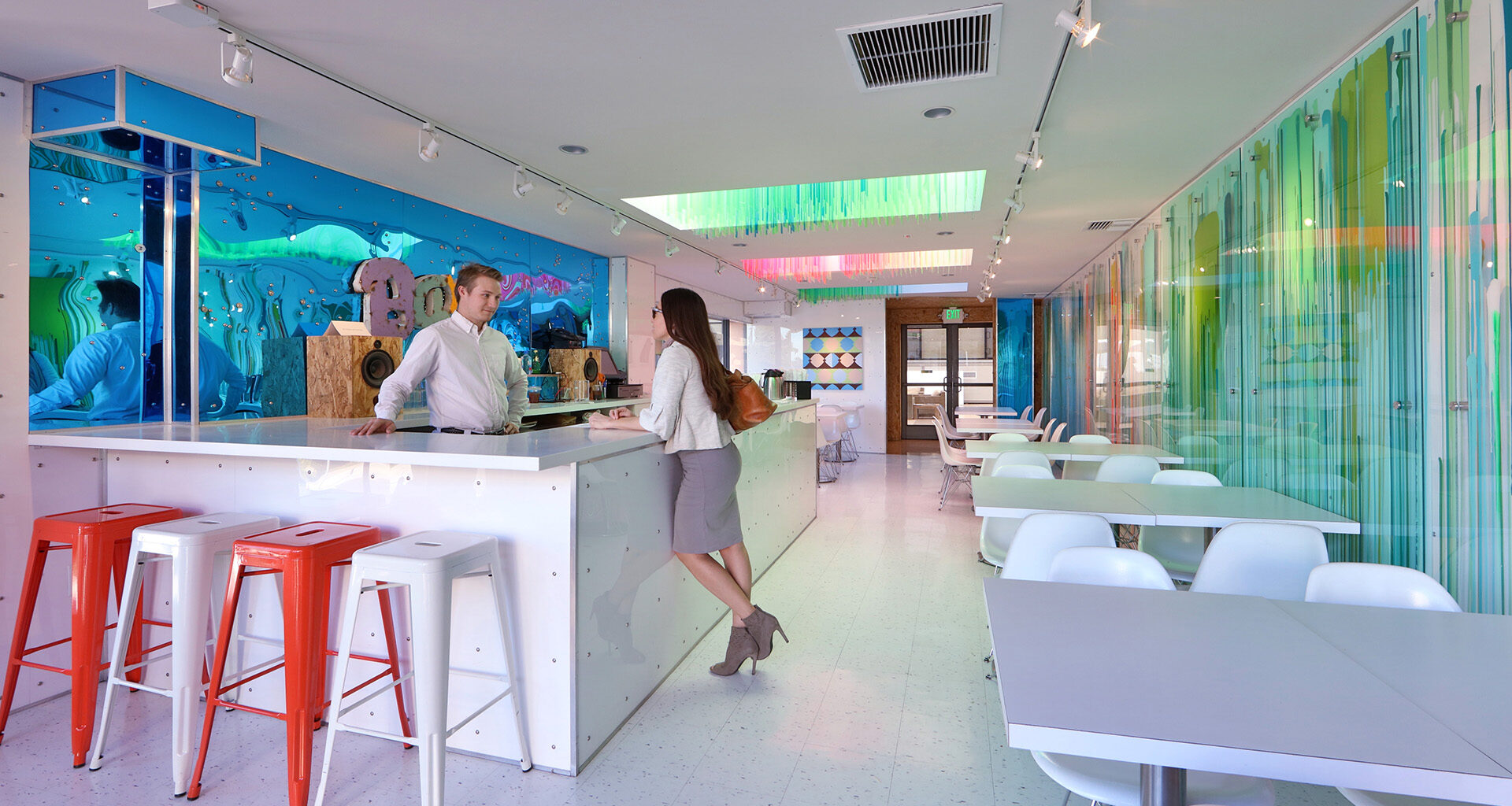 Palos Verdes Art Center, a one-stop shop for exhibits and education, celebrates mid-century architecture on the Peninsula with its current show.

In the early 1930s a group of Palos Verdes residents formed a community art association to serve as a cultural beacon for the quiet, still-rural peninsula. Today, the community minded roots of Palos Verdes Art Center continue to flourish in a modern building—expanded to over 14,000 square feet thanks to a radical re-haul completed in 2013—poised along West Crestridge Road where it meets Crenshaw Boulevard.

The 85-year-old institution is home to a genteel mix of quiet galleries and generous work and learning spaces where classes and workshops are held, along with a full-fledged glass studio. The Art at Your Fingertips program, just one of the Center’s educational offerings, provides art education to over 7,000 students a year on the Peninsula.

Exhibits are a striking mash-up of traditional and emerging aesthetics. A display of plein-air Impressionist paintings might be found in one gallery, while a neighboring space holds a moody exhibit of contemporary works accompanied by a pulsing break-beat (as was the just-wrapped Nathaniel Galka exhibit, Wanderland).

The Center’s diverse sensibilities, seemingly unbound by an allegiance to a particular movement or style, are evidenced in a peek at previous shows, which range from intimate, behind-the-mask images snapped by fashion photographer Mark Shaw, circa the 1950s and 1960s, to the oversized, sensual paintings of current-day Cuban artist Angel Ricardo.

Copies of original architectural blueprints are part of the exhibit, including Neutra’s skillful 1961 plans for Palos Verdes High School, along with artifacts ranging from the pamphlets that promoted Williams’ clean-cut post-War neighborhood, SeaView Palos Verdes, to original prints by famed architectural photographer Julius Shulman—crisp in clarity and contrast, and untouched by any modern day tweaking. “This project has been a community project,” says Andrews. “We’ve received these artifacts from the owners of these properties.”

“These were homes that were quite affordable,” Andrews points out, highlighting the mid-century demand for homes and civic structures—where one could  sink into an elevated-yet-economically accessible post-War life—that had much to do with Palos Verdes becoming a free-wheeling and fertile stage for Modernist building. “You didn’t need the most expensive materials,” says Andrews.

“You needed good proportions and functionality.” The exhibit runs through May 29th, and coincides nicely with an exhibit celebrating the clean lines and unfettered geometry of midcentury pottery produced by Manhattan Beach’s Architectural Pottery, founded in 1950, that runs through April 24th.

Not to miss during your visit is a stop at the onsite co-op, stocked with original wares for sale by artists associated with the center. There are elegant hand-blown glass table sculptures and colorful ceramic home goods displayed alongside painted textiles and handcrafted pens.

One might want to coordinate their visit with lunch. Stripe Café is the chic and sunny onsite eatery, designed by New York interior designer

Doug Meyer and written-up in the New York Times, that serves up hearty and refined dishes, including a short rib grilled cheese sandwich and an entree of seared Scottish salmon—smoked by the chef himself—that’s served with roasted faro. “It’s not the usual boring museum café food,” notes Andrews.