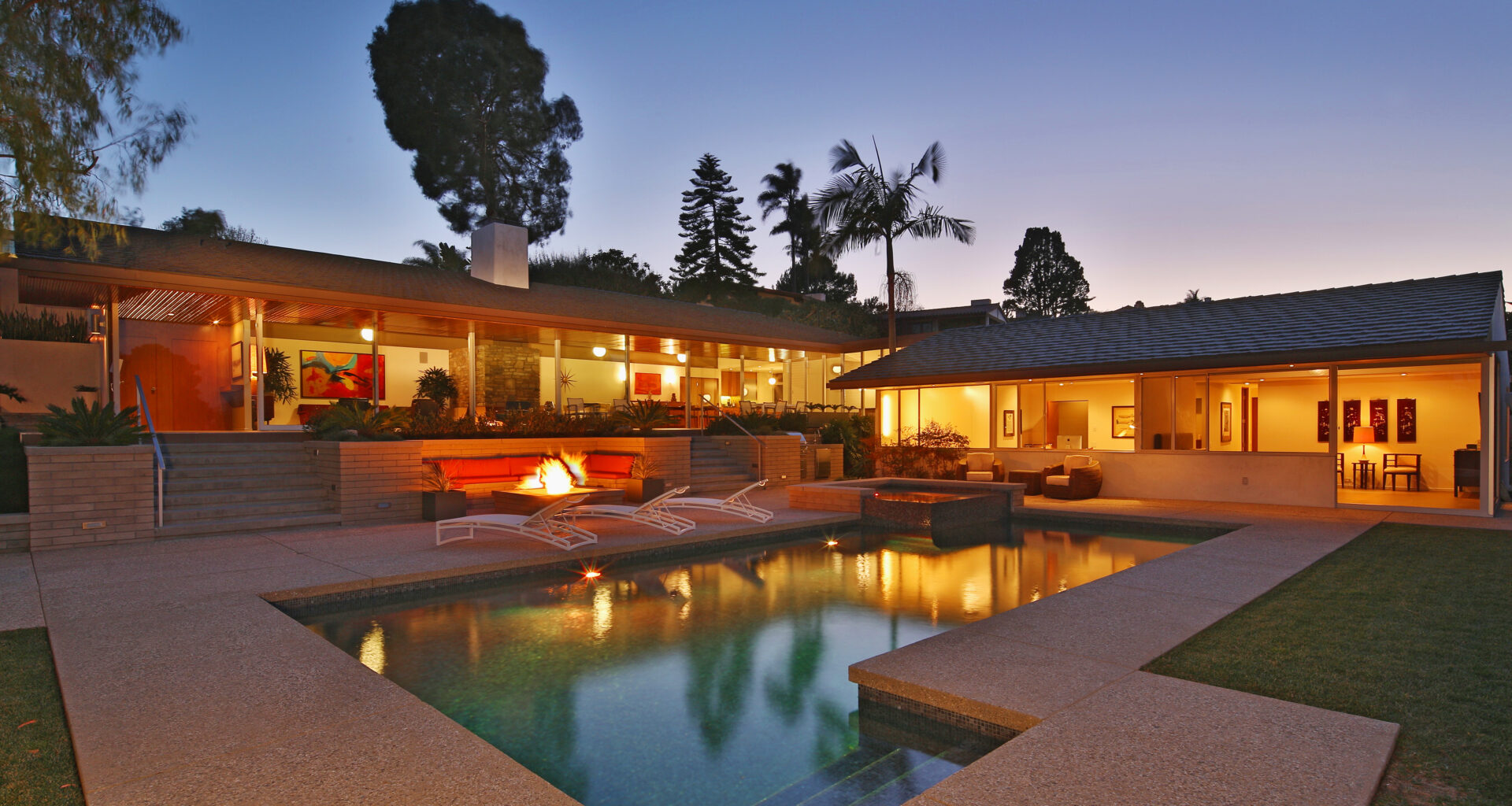 Master architect Richard Neutra, a founding father of the modern architectural movement. Richard Neutra was born in Vienna in 1892, he would become a son of Los Angeles, articulating through his designs a blueprint that would serve as the thematic springboard for many who followed.
Total
0
Shares
0
0
0

Richard Neutra’s everlasting impact on Southern California architecture, and his son and partner Dion Neutra’s faithful efforts to preserve it

There’s been a re-emergence of the Modernist home in Southern California lately, with an ever-growing number of streamlined homes, flat-roofed and framed in glass and steel, rising up along beach communities from Malibu to Palos Verdes. If you’ve noticed it, you may also be wondering from where this style first originated.

Look to the name of architectural master Richard Neutra, a founding father of the movement. Born in Vienna in 1892, he would become a son of Los Angeles, articulating through his designs a blueprint that would serve as the thematic springboard for many who followed.

In his important 1929 book, Modern Architecture: Romanticism and Reintegration, architectural historian and teacher Henry-Russell Hitchcock singles out Richard Neutra as the most notable foreign architect working in the United States, adding that “Richard Neutra alone is a worthy disciple of Frank Lloyd Wright.”

And when the most high-profile buildings of the day were being canvassed for inclusion in the 1932 International Style show at the Museum of Modern Art, an event that, even today, is never-ending in its influence, it was Richard Neutra’s first major residential L.A. commission that made the cut. The 1929 Lovell Health House, which still stands pristinely atop a Los Feliz hilltop and is seen in the 1997 film L.A. Confidential, was among just five U.S. buildings selected, and the only one West of the Mississippi.

From there, the commissions, buildings and accolades piled up, and by August 1949, the architect’s intent blue-eyed gaze, framed by thick eyebrows and a wave of silver hair, gazed at America from the cover of TIME magazine, which bore the heading, “What will the neighbors think?”

Though he passed away in 1970, Richard Neutra and his firm have to date designed well over 400 structures—the bulk of them in Southern California, and Los Angeles in particular. Single-family residences mostly, and plenty of commercial buildings as well, starting in the 1920s, when he arrived in the United States and subsequently made his way to Los Angeles.

The Lovell Health House was designed around the idea of promoting physical well-being and enabled its inhabitants to indulge in ample doses of fresh air and California sunshine. Its look, majestically minimalist, pure white and full of glass, was radical for its time, and it earned Richard Neutra extra distinction for being the first steel-framed residence erected in the nation.

Other high-profile commissions followed, including the clean-cut Laemmle Office Building at the corner of Hollywood and Vine, completed in 1933, and the gorgeously curvilinear Von Sternberg House. Built in 1935 on over 10 acres in then-rural Chatsworth, the residence, which included a moat and a ship’s searchlight, was home to director Josef Von Sternberg and philosopher/novelist Ayn Rand before being demolished in 1972.

A look at the entire body of work of Richard Neutra and his firm—a talent factory whose roster included the likes of Gregory Ain and Harwell Hamilton Harris, both of whom established distinguished careers of their own, and designed abundantly in Los Angeles—reveals them as architects of the people, designing buildings across 20 states and four continents, from apartment buildings and schools to offices, bars and even a chrome-outfitted ticket office, designed in 1937, where one could book passage to Catalina Island.

(For this, Richard Neutra was hired by owner of the island, chewing-gum magnate Philip Wrigley himself.)

Though no two Richard Neutra’s are alike, they share the architect’s signatures, notably unadorned, rectangular slab construction, a flat roof and strong horizontal orientation. This and the visual projection of both strength and airiness, produced in part by Richard Neutra’s skillful exploitation of new materials; specifically, steel and concrete. And whether it was the Leighton Cocktail Bar in downtown Los Angeles or the U.S. Embassy in Karachi—every Neutra project shares a singular premise: to serve its inhabitants’ need for more ease and functionality in the everyday business of living, working and relaxing.

Start With Human Being…

It’s fitting that Richard Neutra’s middle son, Dion Neutra, was born in Los Angeles, and in 1926, just a few years before the Lovell Health House would forever shift his father’s career into high gear. A photo shows the young boy sitting next to his glamorously attired mother Dione at the famous Schindler House, where the Neutra family then-lived with architect R.M. Schindler, a friend of Richard’s from their student days in Austria.

Many decades later, Dion Neutra, also an architect, continues in the approach schooled into him by a father who had him working for the drafting board at age 11. He became an architect by 1950 and was later elevated to the stature of full partner when in the 1960s the firm was re-christened to Richard & Dion Neutra, Architects, and Associates.

“We always start with the human being as the factor that we’re concerned about,” says Dion, sitting at a sunlit table in his Silver Lake residence, The Reunion House, which was designed by his father in 1949.

“We try to think about how best we can serve the person that’s going to occupy these premises and make them most productive and all those sorts of things. That’s always driven our thinking.”

It was certainly on his mind in 1970, when he was in the midst of negotiating a commission for the Huntington Beach Public Library. “We were interviewed for this as a firm in the late ‘60s, and selected from a long list of candidates,” recalls Dion Neutra. “I’m negotiating the contract and my dad was on a lecture trip in Europe at the time—he then had a heart attack and died right in the middle of the process.”

After wrangling with the project’s powers-that-be, Dion was able to move forward with the project, and in April of 1975, a dedication ceremony was held for the new building—a dramatic and infinitely practical structure complete with vast reflecting pools, a web of interior staircases that connect to reading decks, and a concrete spiral ramp swirling around rushing water features.

Today, the library remains every bit the skillfully designed retreat it was designed to be 40 years ago. At an all-day commemorative event in November honoring Dion Neutra, locals came forward to tell the architect how much the library has meant to them over the years. Afterward, when the sun has set, the building stands aglow with darkness surrounding it. Illuminated inside are the many people, young and old, students and families, who have come to this peaceful place to sit, study, congregate and learn.

It’s this timelessness that is the measure of superb design, and among the attributes that elevate a Richard Neutra structure to a masterwork. “The Lovell Health House, which Dad did in 1929,” points out Dion, “well, he was very proud of the fact that people would say to him later, ‘Oh, that looks so ‘50s.’ And no, it was done in the ‘20s! But it was so far ahead of its time that it could have been done in the ‘50s.”

Or, in 2015. Though a Neutra structure might be a forever design, a work of art, those who acquire one might have other plans. That’s where Dion the architect becomes Dion the steward, working tirelessly to preserve existing Richard Neutra projects.

“So many of our sites are beautiful and wonderful, but the building is under-built for today’s sensibilities, so that makes them subject to being torn down and replaced with McMansions,” says Dion Neutra. “It’s a real problem.”

He points to the Livingston House in Chattanooga, the only Richard Neutra in Tennessee, which was recently demolished by new owners. Then there’s the Connell House, a 1958 Neutra of glass and concrete that Richard Neutra nestled seamlessly in the dunes of Pebble Beach, that is currently the focus of a tug of war between its present-day owner, who wants it gone, and preservationists.

“It’s really a tragedy, and I have to live through it,” says Dion Neutra. “My dad, fortunately for him, never lived that long. He only experienced two projects that he worked on in his life that were messed up.” (The Laemmle Office Building, which was heavily remodeled beginning in 1940, and the California Military Academy, built in 1935 and sold in 1964, then razed not long after.)

“I remember his telling me, ‘You know, we’re designing for the amortization period. It’s only for 30 years, and then it’s going to be changed.’ That was his philosophy at that time. But now these are art pieces and you can’t replicate them. It’s a completely different situation.

”True. And though some Neutra projects may succumb to a bulldozer’s ripper, many others will live on, lovingly appreciated for the sublime sculptural quality and ease of living that their maker produced with his unprecedented design approach—an approach fearlessly and abundantly sown into our city nearly 100 years ago.