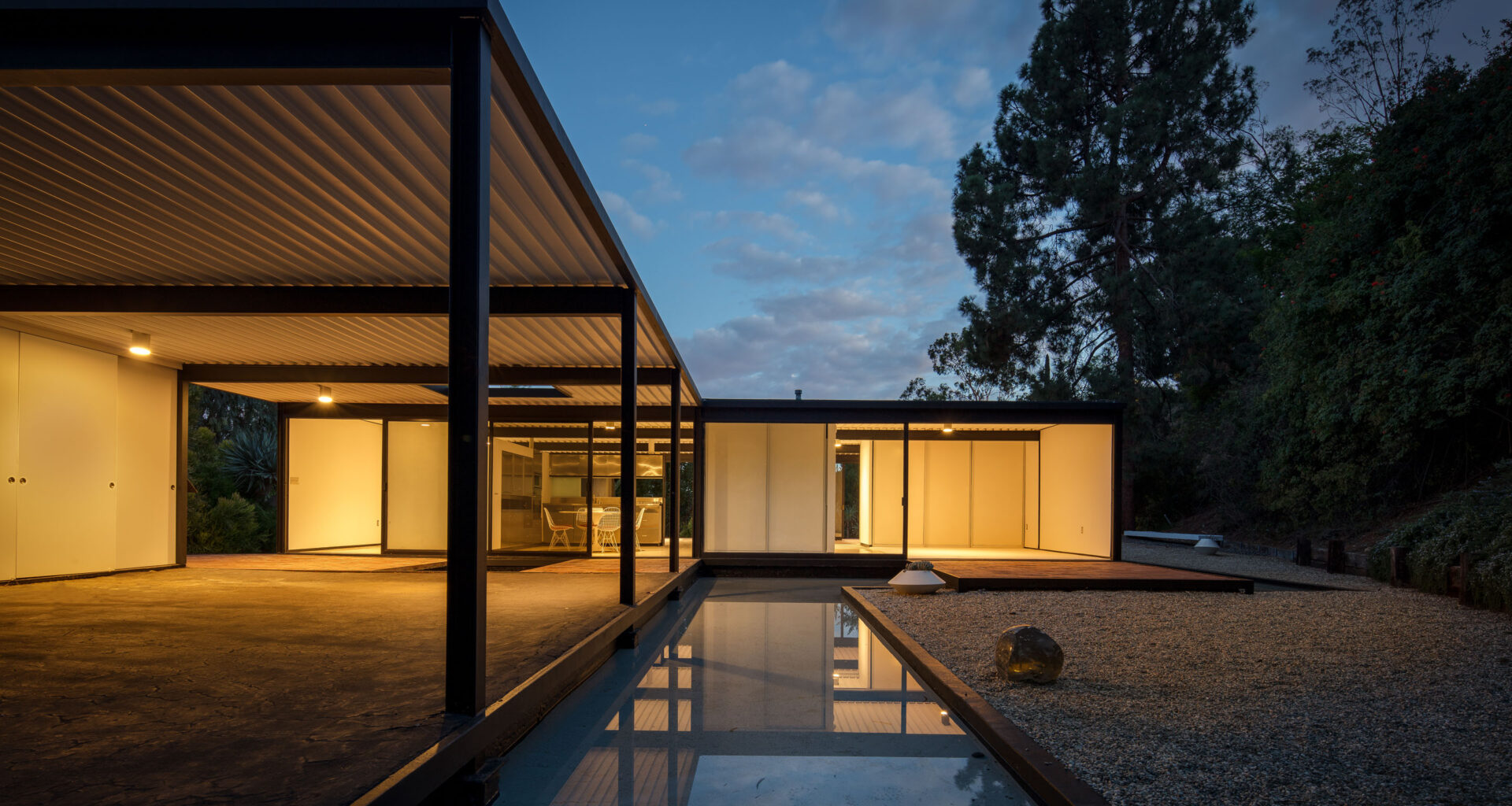 In January 1945, Los Angeles publication Arts + Architecture announced the Case Study House program, with the goal to create and promote cutting-edge—and accessible—home design models in anticipation of returning American G.I.s, and with them, the need for good residential housing that could be produced on a mass scale.
Total
3
Shares
0
0
3

The Once in a Lifetime Chance to Own Case Study House No. 21 offered by Aaron Kirman of Compass

The program summoned leading architects and designers of the day—Richard Neutra and Charles Eames among them—to let loose and experiment to their hearts’ delight.

Of the 36 Case Study House Plans drawn, twenty-something were built—two by California architect Pierre Koenig. Perhaps the most famous home of the program is his Case Study House No. 22, also known as Stahl House, which still stands, elegantly poised above Hollywood.

“They are built in thesis for Southern California architecture and firmly own their place in history.”

Then there’s Case Study House No. 21. Also known as Bailey House, the careful Pierre Koenig design is a master study in steel and glass, completed in early 1959.

At the time, Arts + Architecture lauded his efforts: “The design is beautifully articulated in steel and represents some of the cleanest and most immaculate thinking in the development of the small contemporary home.”

“Being able to represent homes like the Bailey House is the reason I originally got into real estate and is something that I continue to cherish every day,”

He’s the right man for the job, having represented both buyer and seller when Case Study House No. 21 was previously sold, and in doing so, setting a Hollywood price record at $4,722 price per square foot. He has deep history with architecture, having represented such gems as Richard Neutra’s Kaufmann Residence, Frank Gehry’s Schnabel House, and Frank Lloyd Wright’s Ennis House, among others.

“He’s been a player that has represented so much of Los Angeles’s rich architectural history,” says Andrew Butler, marketing director for Aaron Kirman Partners.

“When these properties come to market, there aren’t a lot of sellers who don’t know him and his history of selling architecture.”

Koenig had originally designed the home for psychologist Walter Bailey and wife Mary, a hip, prosperous couple who commissioned the architect to design the home, made up of four rooms total: a living room, kitchen, two bedrooms and two bathrooms. The home features a starkly open design, made possible by steel framing.

Openness and steel were two Koenig calling cards that the architect innovated to create homes enabling their inhabitants to live in union with the hospitable Southern California climate while enjoying a thoroughly modern lifestyle—aims that are neatly satisfied in the home today, just as they were decades ago.

The roofline of Case Study House No. 21 is flat, with no overhanging eaves to shield against the sun. Instead, Koenig carefully positioned the home on a north-to-south orientation to make the most of the warm winter sun and reduce its excesses in the summertime.

Floor-to-ceiling glass cover the front and rear of the home to merge indoors and outdoors, while privacy is kept intact with white panels that shield the carport and remaining sides of the home. There are ample sliding doors in the home not just for views and quick access to the outdoors, but for comfortable cross breezes too.

Koenig’s use of water is a central element—it surrounds the home in the form of reflecting pools that enhance the peaceful atmosphere while adding a cooling element on hot days. In these pools, the home’s vivid angular lines are mirrored, casting moody reflections that change through the day.

“A big element of this type of architecture is its interaction with its natural setting,” points out Butler.

“It’s a marriage of the structure and your environment. That’s a whole additional element of mastery that the Bailey House achieves at almost an unparalleled level.”

Inside, an exposed ribbed-steel ceiling offers visual texture to the interior of the home, along with another Koenig signature—thick beams that create a clean contrast with the stark-white interior. The home is L-shaped, and one steps from the carport into the kitchen, which adjoins the living room.

An inner courtyard houses two bathrooms, which can be accessed from either side of the home—the bedroom side, or the kitchen/living room side. The home may span only about 1,300 square feet, but it lives much larger.

“One of the striking things about this home is the sense of expansiveness,” says Butler. “It moves with you. It feels like a really spacious environment.”

After living in the home for a decade, the Baileys relocated to the East Coast. Over the next few decades, other occupants made changes to the home, marring Koenig’s original design. A fireplace was added; so were skylights. The kitchen was deleted in favor of a central island, and the white vinyl floor tiles were replaced with ceramic ones. In the late 1990s new owner Dan Cracchiolo came into the picture, a mid-century purist who engaged Pierre Koenig to bring the home back to its original state.

He did, with the undertaking lasting nearly double the time it took to construct the home in the first place. The project culminated in a City of Los Angeles Historic Preservation Award of Excellence in 2000 and a Bailey House that once again represented the creator’s original vision, down to the furnishings.

The Case Study House program produced a living laboratory of mid-century innovation—a twining of the finest fruits in engineering, materials, and design to produce a collection of homes still cherished today for their unmatched blend of pragmatism and beauty.

“There’s a kind of re-understanding of luxury today,” says Butler.

“The things that have intrinsic value, historically, are things that are rare, incredibly well done, artistic and very, very difficult to copy.”

In the case of Bailey House, Pierre Koenig created a masterwork that meets all such conditions and will continue to serve as ideal grounds of smart Southern California living for countless days to come

Explore Story
A cheerful new coastal California home meshes elevated style and an of-the-moment floor plan to make the most of walk-street living.
0
0
1
Explore Story
A prime Sunset Strip locale that once accommodated the House of Blues, as well as a parking lot and some apartments, is now paving a path for the new Pendry Residences West Hollywood by Montage Hotels & Resorts, set to debut this summer.
0
0
0
Explore Story
Thomas Jefferson’s historic mountaintop home Monticello expresses the spirit and architectural legacy of its founding father If home…
0
0
0
Explore Story
Table of Contents An Inviting, High-tech Island Retreat Commands a Peaceful Stretch of the Hermosa StrandComfortable Contemporary HomeEndless…
0
0
0