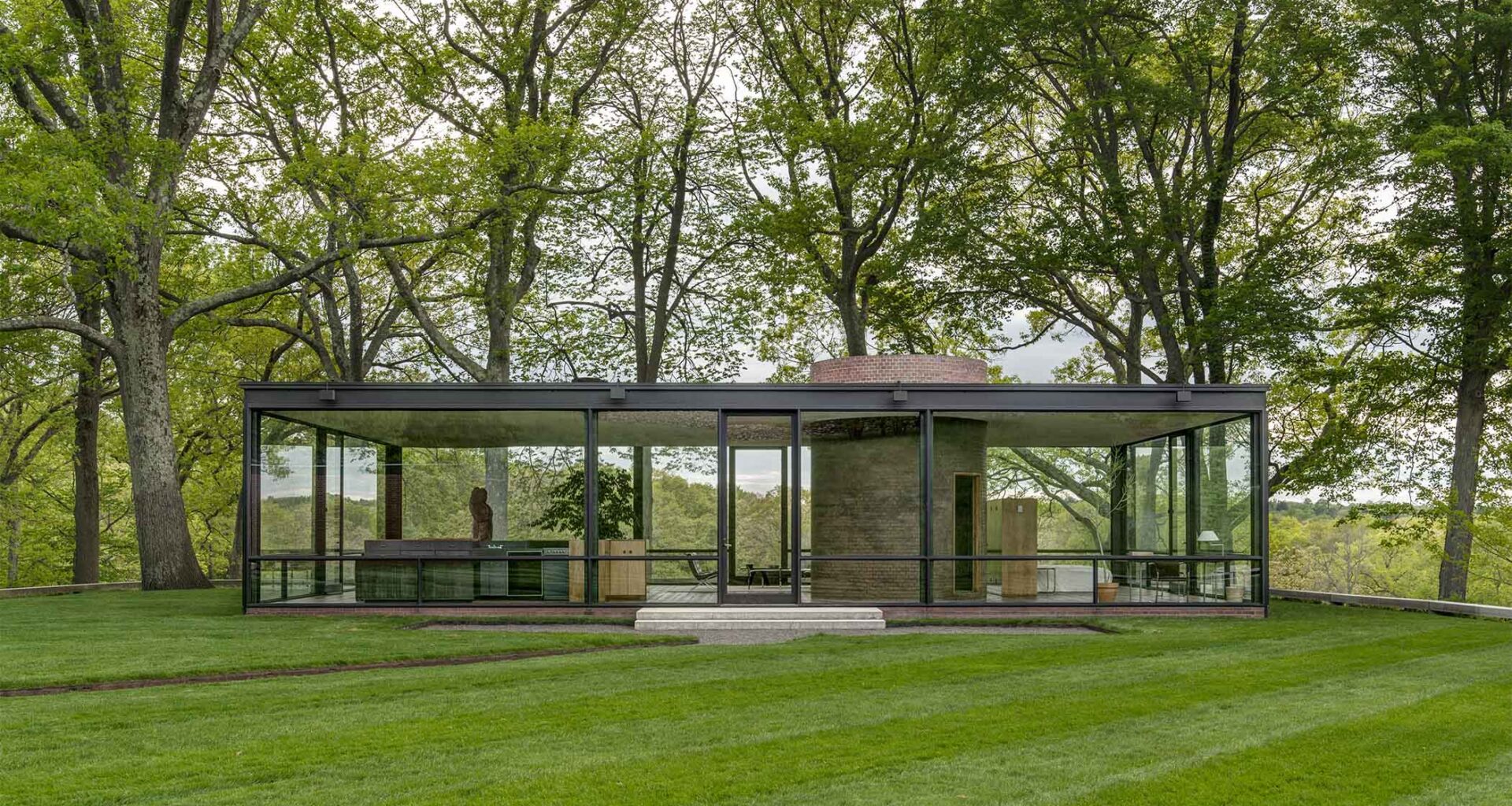 Philip John’s Clarity of Vision with The Glass House

Reflecting the Beautiful Southern New England Landscape, The Glass House is a Window Into the World — and Soul — of Architect Philip Johnson

That legendary American architect Philip Johnson was a religiously focused believer in modernism is something of an enduring fiction. He always thought in a modern fashion but did not believe that modernism was the one and only way to practice architecture, and he’d break with convention, and the thinking of some contemporaries, to create a modern aesthetic that could accommodate historical elements—domes, colonnades, and columns.

Then again, Johnson was unusually brilliant, a visionary both of his time and before it, with an encyclopedic understanding of a great many things, from art to 18th- and 19th-century European gardens.

He studied philosophy and classics at Harvard, traveled throughout Europe during the late 1920s, and met the central figures of modernist architecture: Walter Gropius, founder of the Bauhaus, and another of its disciples, Mies van der Rohe. As director of a new architecture department at the Museum of Modern Art in New York, Johnson co-authored The International Style, bringing Bauhaus practices to the American masses. He later returned to Harvard to study architecture and followed Marcel Breuer’s lead to New Canaan, Connecticut, where land was plentiful, there was train access into Manhattan, and it was easier to register as an architect. Taken by the landscape, Johnson purchased five acres of 18th-century farmland flanked by stone walls and designed the manifestation of an earlier interest—the Glass House.

A modernist in the countryside, especially one as erudite and urbane as Johnson, is not a complete contradiction. In fact not at all. Johnson was a native Midwesterner; his grandfather maintained a gentleman’s farm and he loved the idea of being in nature. So he situated the Glass House in a way that has more of a relationship to fellow Midwesterner Frank Lloyd Wright than the early period of modernism of which he is part: sort of nestled into a hill, with a lovely view of a manmade pond.

Most surprising about the structure to Hilary Lewis, chief curator and creative director of the Glass House, who spent 10 of her 25 years at the property working alongside Johnson, is just how much one place can change. How it shifts with the seasons, appearing different on a cloudy day than a sunny one. And just how much color actually exists in the minimalist masterpiece. The way its saddle-hued Barcelona chair, for example, turns coppery in streams of sunlight and the truly extraordinary expanse of green visible from every point.

“Johnson used to joke that he had very expensive wallpaper,” says Lewis, referencing the extraordinary surroundings outside the transparent walls.

“The whole point wasn’t to have some glass object; it was to be in nature. Johnson liked being surrounded by trees and greenery and seeing birds. He always had a home in Manhattan, but his place in Connecticut was where his heart was.”

Best comprehended as a porthole through which to view its magnificent setting, the just over 1,800-square-foot Glass House was completed in 1949 and maintains its initial design. It has very few things in it. Most of the furnishings, pulled from Johnson’s New York apartment, are Mies van der Rohe designs. The lone painting is a classical landscape from the 17th century attributed to Poussin.

There is a fireplace for colder climes and centrally located doors in the middle of each glass wall that opens the house up to nature. Opposite the Glass House is the Brick House, which is nearly completely enclosed save for skylights and circular forms referencing Brunelleschi’s Dome in Florence. The Brick House shelters underground connecting mechanicals and support systems for both buildings. A green courtyard separates the structures, but they are two wings of the same house.

The Glass House, which is how Johnson referred to the entire property (now totaling 50 acres), is actually one of 14 total structures of various architectural styles on the grounds. Aside from the pavilions made of glass and brick is the glass-ceilinged Sculpture Gallery, built in 1970 and partially inspired by the islands of Greece with works from the likes of Robert Rauschenberg and Frank Stella, as well as the Studio, a workspace built in 1980 with 1,400 books on architecture. Particularly personal is the Painting Gallery, constructed in 1965, home to Johnson’s and his longtime partner David Whitney’s vast art collection, with works from Andy Warhol, Cindy Sherman and Julian Schnabel. Johnson was as prolific an art collector—he met Kandinsky, he knew Klee—as he was a promoter of other architects, like Frank Gehry, with whom he was great friends and would see in L.A. en route to his house in Big Sur.

“To him, time would change, so styles would change. He had an appreciation for novelty and the newest developments. He kept up with what was happening in the world. It’s all Johnson’s interpretation of European Modern placed in the context of Connecticut.”

In letting the property evolve over time, Johnson expressed his diversity of tastes and willingness to not stay in one mode.

“The different styles was his own form of consistency, as opposed to something that was in conflict,” explains Lewis.

Prior to his death in 2005, Johnson endowed the National Trust for Historic Preservation with the Glass House, opening up his remarkable view to—and of—the world. TheGlassHouse.org 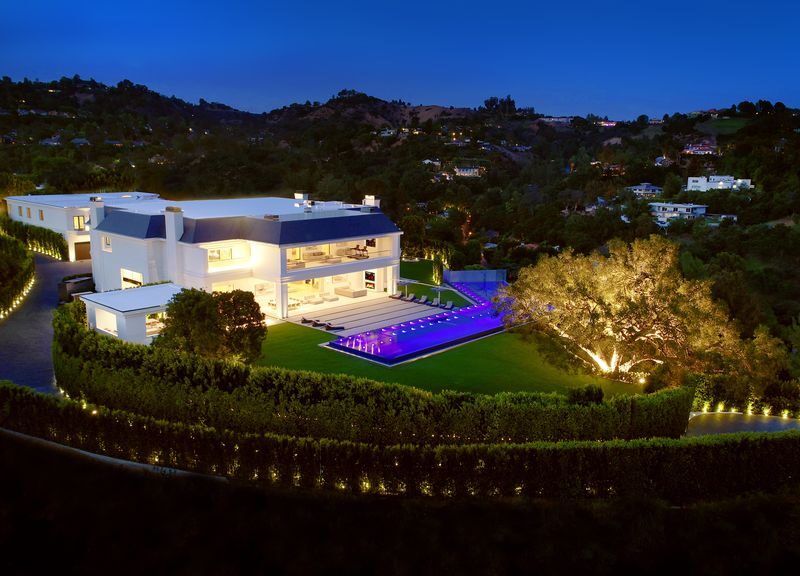 Read More
If sold at its list price of $135 M, this Beverly Crest mansion, by Gala Asher would be…
Read More
1
0
0

Read More
With an international background and a true passion for traveling, interior designer Sara Story masters the art of…
Read More
0
0
0

Read More
The new, crisp white home on 1617 Hermosa Avenue—steps from the action on the beach and Pier Avenue—neatly exemplifies an aesthetic that’s been cropping up throughout the South Bay.
Read More
0
0
1