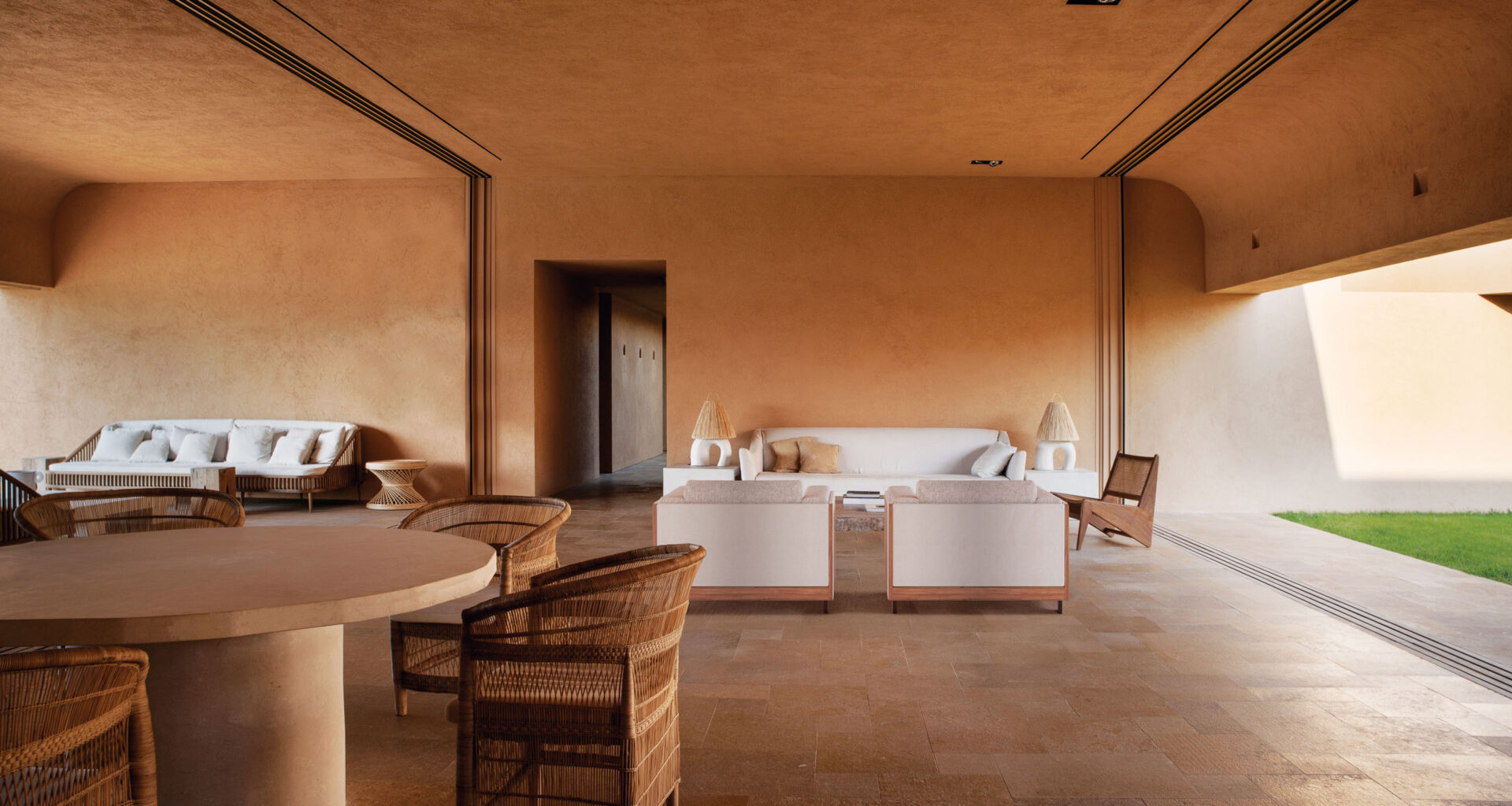 Located in Mahón Bay, on the Balearic Island of Menorca, Spain, a building of strict modern bearing offers an insurgency of space and, beyond its serene monochromatic walls, a halo of sun and sky.
Total
2
Shares
1
0
1

With Spectacular Exposures to Its Sunny Surround, a Spanish Summer House by OOAA Arquitectura Is Visionary to the Extreme

It is a magical scene for a deliberate work of architecture that is unambiguously minimal yet easy-going in its tensions. The concept is signature OOAA Arquitectura, a Madrid, Spain studio directed by founder and architect Iker Ochotorena that prides itself on, as the practice puts it, optimizing its “economic and natural resources while pursuing a timeless and simple architecture.”

The studio’s instinct for simplicity is sharp and unrelenting. Simple does not mean a lack of complexity, however. Baleares house, as this project is known, is architecturally assertive but unassuming in its naturalism.

“To me, the minimalistic process happens not through a self-restraint exercise, but the opposite: I place value on the vacuum,” says Iker Ochotorena on what he wanted the architecture to convey.

“The vacuum is what is in the middle, so we need very few things to create it. It is true that the vacuum is identified with nothingness, but it is not the same because the vacuum needs to be surrounded by elements that create it.”

Bare-minimum in its fixtures and finishes, and proudly uniform in tone with a host of glass exposures, the project is an homage to light and space. And such light, such space!

“Several constraints, as well as the clients’ needs, helped me draw the volumetry,” Iker Ochotorena relays.

The result, he adds, is “a very blind façade to the street” that nonetheless coaxes in “natural light through the patios that the beam generates.”

A sequence of walls and patios, meanwhile, dampens the interior of the house, eliminating the interior-exterior frontier.

“In the interior,” Iker Ochotorena adds, “the house opens and closes itself to the sea views, generating strong light contrasts, with spaces connected by blind transitions that remind us of the old Mediterranean architecture. Monochromatic finishings and great walls make the whole building.”

The whole building, yes, but that is not the whole story. Baleares house begins with the client: a family composed of older parents, three daughters, and many grandchildren. The structure, therefore, was designed as a place for the family to gather on holiday. Certainly they can all stretch out comfortably.

This is a house of both robust substance and scale, with the hall entrance, generously dimensioned kitchen, open living room with one porch at each side, three en-suite bedrooms, and two large bedrooms with bunk beds for the children, all on the ground floor. A large master bedroom shares this level. Given the potential for a full house, Iker Ochotorena made space for an annex with two bedrooms for staff.

With a little flourish, the light-filled Baleares house is one of purity and form, with a soft neutral palette amplifying the clarity of the architecture. Baleares is beautifully balanced, too, with a number of intriguing frictions: it is spare but not stark; minimal yet warm; stylish but understated (and, quite rightly, under-styled).

Infused with an almost monastic calm of the honest architecture mold, the home’s clean lines and thoughtful appointments bring to mind Belgian design. In Iker Ochotorena, one senses a kindred impulse; his work is that of an aesthetic naturalist with a bent for classic decoration rather than an overt devotion to modernism. Baleares house straddles both spheres.

Holistic is an overused term in contemporary design but still the OOAA approach.

“We make projects to the last detail,” Iker Ochotorena offers.

“The interior design is part of the whole project. Carpentry and constructive details are key in our projects, which all have to do with the exterior language.” For Baleares house, austere materials respond to “the culture of the island.”

This includes revoke mixed with reddish soil typical of the area for walls and ceilings; natural reddish limestone for floors; Iroko wood for the interior.

“We selected these materials in order to achieve a monochromatic space with peaceful sensations,” the architect notes.

“When you leave out color, only the shapes are expressed in their radical condition, in their original self-being, because the color distorts them.”

If Iker Ochotorena speaks vaguely like a philosopher, then Baleares house—rational, individualistic, ordered—is a product of his architectural thinking. If not a kind of philosophy itself—worthy of study for years to come.

Explore Story
Many of these projects are highlighted in the forthcoming book From Palm Beach to Shangri La: The Architecture of Marion Sims Wyeth (Rizzoli) by Jane S. Day. The exuberant tome, a paean to Marion Sims Wyeth and historic preservation, gives overdue recognition to an architect who is too little considered in contemporary times.
0
0
0
Explore Story
It’s an urban oasis, as immersive and cool as a Mediterranean breeze and just as refreshing. The Rooftop…
0
0
0

Explore Story
Located in Woodside, California, this 17,000-square-foot home was built on an exceptional 3.5-acre site for a couple—who are active philanthropists with a focus on children’s health and education, and cancer research—and their children.
0
0
0
Explore Story
This iconic home in Studio City, a brick and glass house, once home to acclaimed graphic and industrial…
0
0
0