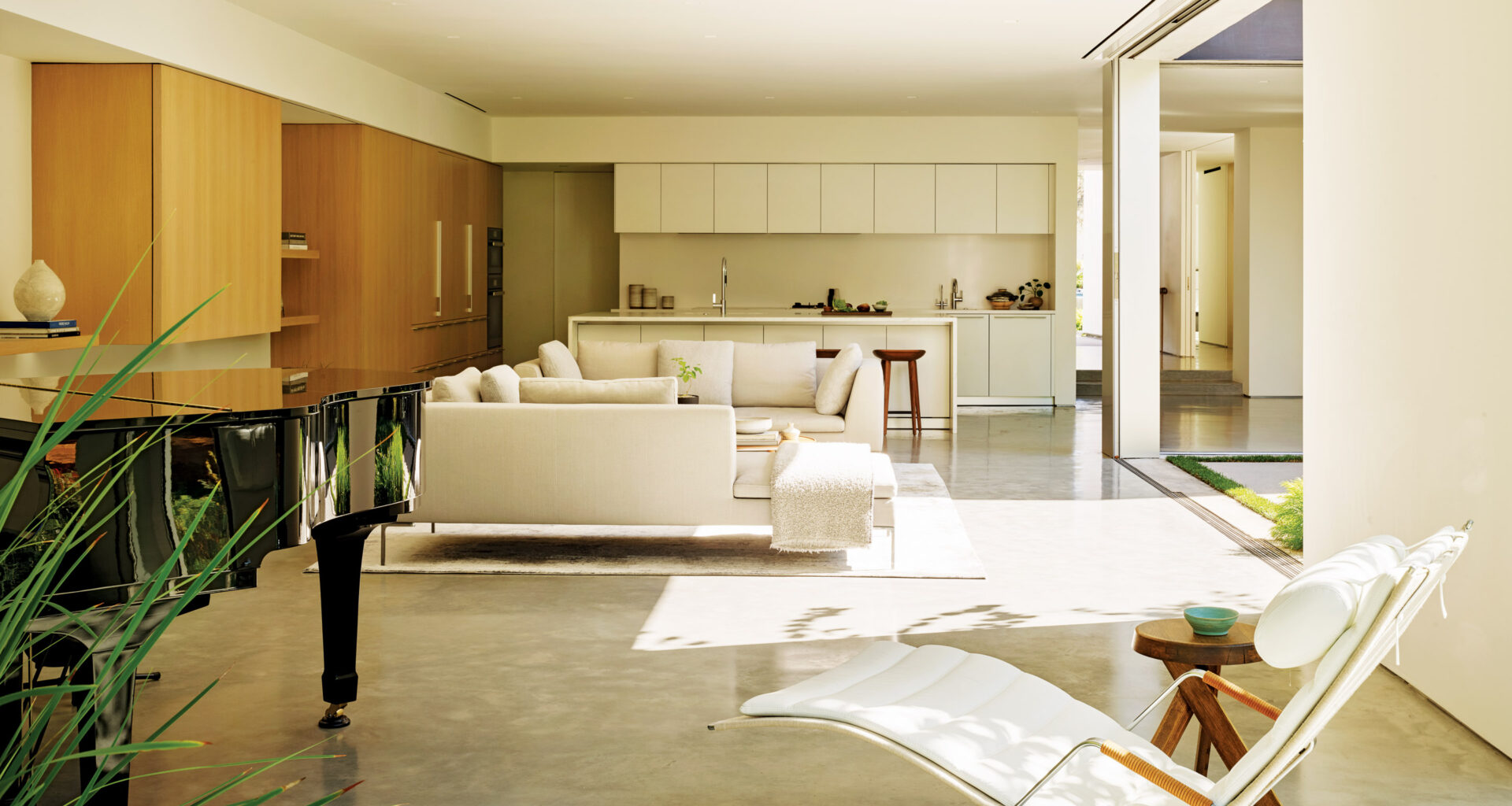 “We practice what we call California Modernism,” says EYRC partner Takashi Yanai, who’s also the firm’s Residential Studio Director, “This approach entails celebrating the roots of Modernism—including the connection to the outdoors, the tranquility of simplicity, and the beauty of craft—and tailors it closely to the particular site.”

The family—he’s a high-powered attorney, she works from home, they have two teenage children—wanted a place for rest and reflection that would be a welcoming and rejuvenating retreat from the chaotic demands of work and school.

Having the architecture serve as a backdrop for living, with a very clean and minimal palette, is important in EYRC’s residential design work. Here, the layout spoke directly to the family’s needs.

“Since they practice togetherness, not hanging out in separate rooms, they were looking for a blended family space with indoor-outdoor connections,” Takashi Yanai shares.

“They were also interested in Scandinavian and Japanese design influences which pairs well with the emphasis on indoor-outdoor living.”

The couple was introduced to EYRC’s work through a home the firm had designed for the parents of one of their children’s friends.

“They contacted me and we quickly built a rapport around our shared enthusiasm for food, art, and travel, especially around Japan,” Takashi Yanai remembers, “All these mutual interests had a direct and positive impact on the design.”

In addition, Takashi Yanai’s personal background—born in Japan, he was raised in California—enabled him to nimbly fuse these two influences into a cohesive whole. He’d worked as a design journalist before becoming an architect; he brings this narrative approach to his design work.

“These concepts particularly came through in this project in many ways, from the overall organization of the home to the details like a bench in the hallway.”

Creating a sense of privacy was important to the design’s success.

“The design is strategically planned to be two interlocking L-shapes, the house, and the exterior,” says Takashi Yanai.

Feature walls and tall plantings also help shield the family from their neighbors as does orienting the home towards the back and screening the street side of the home. In fact, despite the home’s proximity to its neighbors, the overall experience is one of light and air and greenery and tranquility.

“Maximizing the connection to the yard was really important,” Takashi Yanai, explains, “The grass literally comes up to the very edge of the house, softening this relationship and making it into an outdoor living room.”

For the interiors, EYRC worked closely with Jodie Neve Design to select finishes and pieces that would reflect both the owners’ taste and their wish for a place that was calm yet inviting.

“The husband, in particular, expressed that he wanted to come home and be in a garden,” says Takashi Yanai, “The spaces and interiors were consequently designed to always be focused or directed to views of the outside.”

This is underscored by several terraces, including a wooden deck with a wooden soaking tub off of the primary bathroom.

The meditation spot is one of the home’s most arresting features, slotting seamlessly into its overall impression of calm. Located at the top of the stairs, its roof open, framing a view of the sky and trees, it’s a quiet space for sitting, reading, yoga, or meditation.

“The mediation space is a very unique aspect of the home and further reinforces the contemplative Japanese and Scandinavian influences,” says Takashi Yanai.

“This space became an additional moment for reflection and peace and made creative use of a space that would typically be considered ‘leftover’ into something that is a beloved feature of the home.”

Takashi Yanai recalled one moment during the construction process when clients and architect were discussing the outdoor seating.

“They wanted to have it close to the kitchen and immediately outside the living space; I felt it should be at the far corner of the yard to create a destination,” Takashi Yanai says.

He melodramatically threw open the sliding glass doors to the exterior, letting the embrace of landscape and space speak for itself. The gesture convinced them.

“I think they are surprised at how much the outdoors and the views of the garden are integrated into their everyday lives.”

Explore Story
Take a look at the Grand Opening of a new luxury development by the Chadmar Group as they fuse nature and design at the residences at Rolling Hills Country Club. Properties range from $2-5 million. Cliff May was a well-known builder and proponent of the California ranch home, designed as the “dream home” for the many Americans who settled into the newly-formed suburbs of Southern California during the post-war period. Joining elements of Spanish Revival architecture with Modernism, the appealing homes were low-slung structures with a horizontal orientation and a design that focused on easy living and welcoming in the outdoors—and they sold like hotcakes during the 1950s and 1960s.
0
0
0
Explore Story
A traditional home mingles the ease of Southern California living with old world graciousness and enjoyment. Written by…
0
0
0
Explore Story
Fulfilling a desire for sustainable-chic, small-footprint living, shipping containers take on new life in residential real estate Written by Jenn…
14
0
0
Explore Story
Nestled within The Palos Verdes Peninsula the Mediterranean-style Terranea Resort—known for its natural beauty and 102-acre oceanfront setting in L.A.’s Rancho Palos Verdes—this private vacation home now on the market for $1.795 million comes with the option to occupy the fee-simple property up to 90 days a year and rent it out the remaining days per California Coastal Commission requirements.
0
0
0