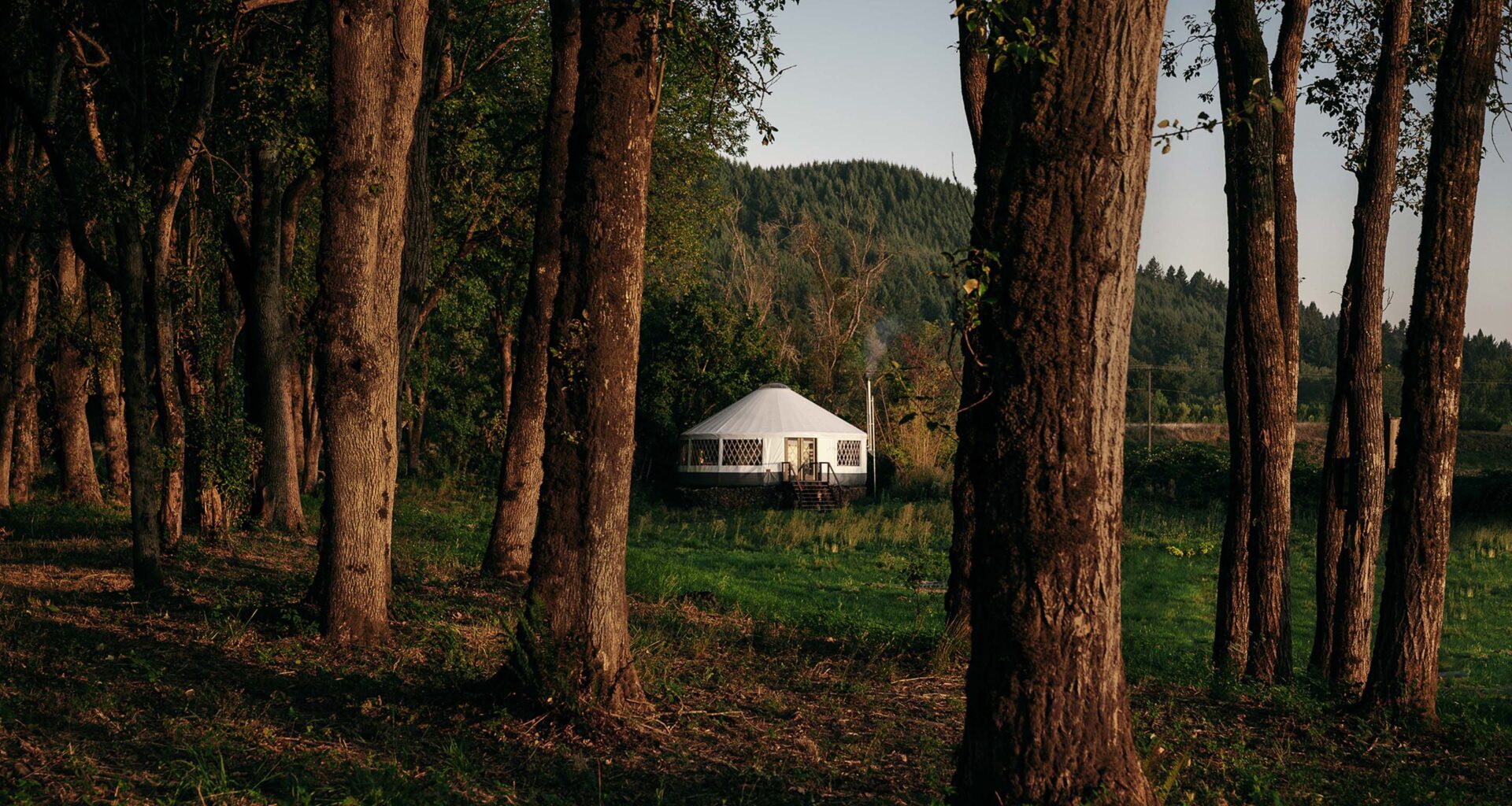 The yurt—that portable, tent-like structure used by nomadic tribes—comes from ancient origins but is having a moment. In truth it’s never gone away.
Total
0
Shares
0
0
0

“The traditional yurt may be one of the oldest forms of indigenous shelter still used today,” notes Zach Both, who with his girlfriend Nicole Lopez and a labor force of family and friends, built a modern version of the primitive dwelling just outside of Portland, OR, in the span of a weekend. Lest one expect your average tent set-up, this Rainier Outdoor-manufactured modern yurt is spacious with 730-square-feet of living space, water and electricity.

“Most yurts built in the U.S. today possess a rustic quality to them akin to a log cabin,” says Zach Both. “We attempted to distinguish our yurt by adding a contemporary flair with minimalist decor, muted colors, and a one-of-a-kind round loft surrounded on almost all sides by plants.”

For matters of function, a wood stove provides heat while the bathroom features a compost toilet.

With Zach using the space as a home office and Nicole as a relaxing sanctuary, the couple’s yurt is a prototype not only of what’s possible, but doable too, thanks to the free nuts-and-bolts building guide for those with limited building experience that Zach Both created—the aptly named DoItYurtself.com.

The A-to-Zach on Building a Modern Yurt

Why a yurt? As a filmmaker who traveled North America in a self-converted campervan, I was introduced to various alternative-style homes around the country. My girlfriend Nicole and I [were] drawn to the yurt time and again because of its rich history and unique construction.

As building evolves, where do you see the yurt? It’s an opportunity to improve the natural environment with sustainable building practices, along with the added benefits of more affordable housing and a deeper, more intimate connection with our homes.

How doable is this? The popularity of prefabricated kits has made the process of building a yurt similar to putting together a massive piece of furniture from IKEA with simple to understand instructions and pre-made parts that come together with relative ease. Nicole and I were complete novices at the beginning of this build. We stumbled through every step of the construction process from plumbing and electrical, to framing walls with sheetrock and installing salvaged wood flooring. The yurt acted as our construction laboratory where we could experiment and learn many new skills that we’ll carry into future build projects.

Who might build a yurt? As a place of permanent residence, the yurt’s ability to bring you close to the nature surrounding it means it is best suited for people who own large swaths of untouched land. However, you can also find yurts in an even wider variety of environments, used in a multitude of alternative ways—from backyard yoga and art studios to makeshift bars on the bottom of ski slopes.

Explore Story
Not long after arriving from India, Raju Chhabria drove to Palos Verdes for a job interview. “I looked around and thought, ‘…This place is beautiful. Someday I want to own a house here.'”
0
0
0
Explore Story
Imagine a brand-new, contemporary estate stationed on a prime parcel of land overlooking Bel-Air Country Club’s picturesque golf…
0
0
0
Explore Story
With designs spanning from Northern to Southern California, Lindsay Chambers uses exactly what’s needed– no more, no less…
0
0
0
Explore Story
In 1929, construction commenced on a four-story apartment building at 659 West Wrightwood Avenue in Chicago’s Lincoln Park…
0
0
0