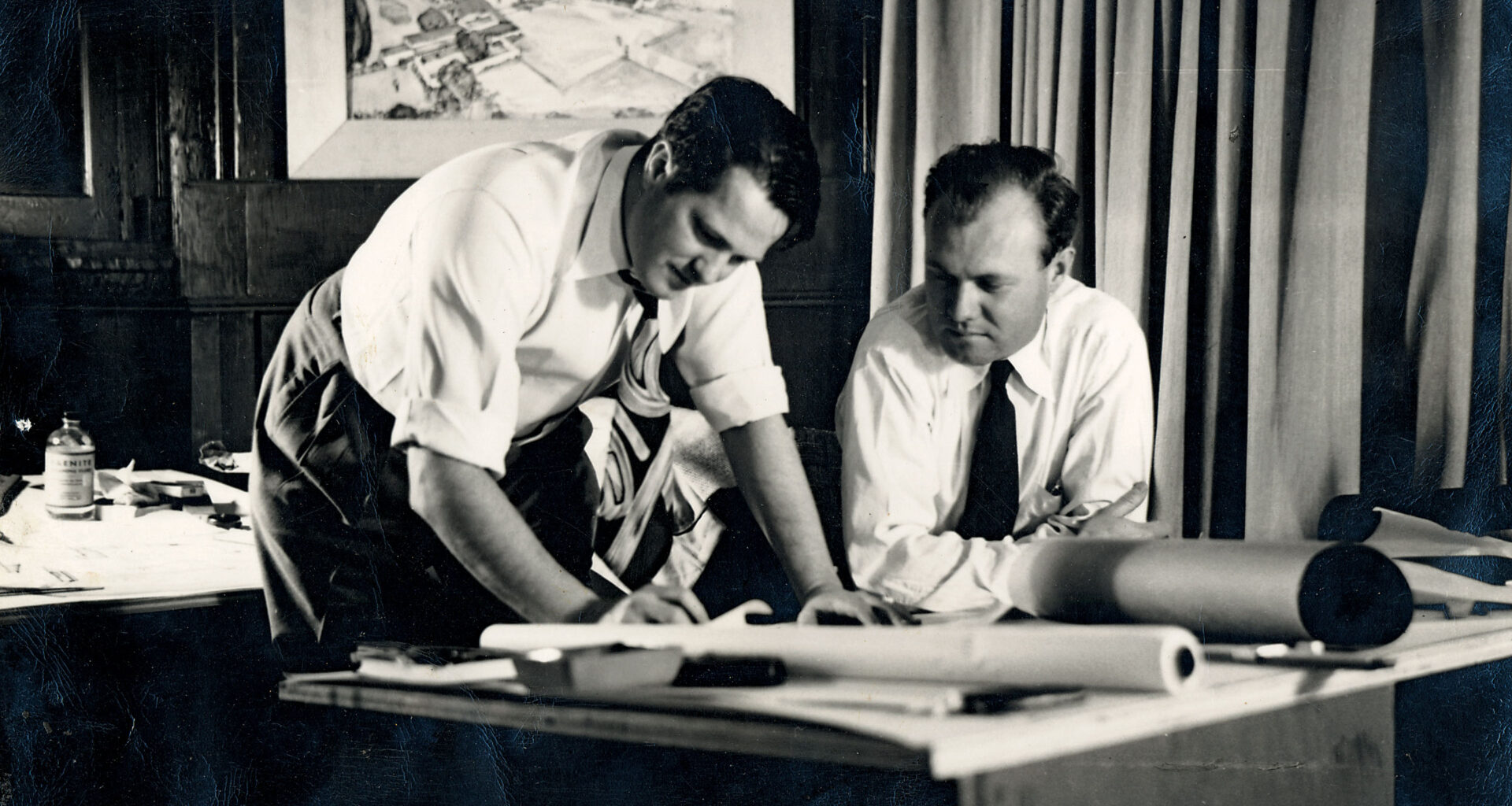 Architect William F. Cody was reliably prolific visionary desert modernist with works ranging from Arizona, to Cuba and Hawaii. Daughter Catherine Cody, Don Choi and Jo Lauria discuss how his legacy lives on in the built environment he left behind.
Total
0
Shares
0
0
0

Architect William F. Cody had a poolside seat to postwar modernism in Palm Springs, not only help define the sun-soaked oasis where he was reliably prolific but outside of the Coachella Valley to other points beyond, too. That he did it in roughly a quarter of a century makes his output—and his low-roof, open-plan works—all the more extraordinary. A visionary desert modernist who was active in different contexts and climes (including Arizona, Cuba, and Hawaii), William F. Cody’s career was sidelined by a debilitating stroke in 1973, but his legacy lives on in the built environment he left behind.

“After World War II, California emerged as the locus of efforts to create modern lifestyles and the homes to house them,” says Don Choi, who, together with Catherine Cody (the architect’s daughter) and Jo Lauria, co-authored the forthcoming new tome Master of the Midcentury: The Architecture of William F. Cody (Monacelli).

In an era that gave rise to the Eames House, Richard Neutra‘s Kaufmann Desert House, and the Case Study Houses, William F. Cody emerged as one of the most influential modernists of the period. His buildings were original; rather than adhere to a specific modernist vocabulary, Cody experimented with form and material—wood, stone, steel, concrete.

What’s more, “My father was a perfectionist with his designs,” says Catherine Cody. “He wasn’t satisfied with just good.” He was exacting.

“It had to be perfect—Bill Cody’s way. Colleagues and people who watched my father draw were impressed by how fluid and fast he could come up with ideas and design solutions,” she adds. One even observed that William F. Cody “could draw his ideas upside down for the client’s perspective across the table.”

Among William F. Cody’s contemporaries was architect and USC alumni William Krisel, who in a letter to Catherine affirmed the architect as “a known and admired legend.” In doing his “best to learn from Cody’s techniques,” William Krisel summed it up this way: “Seeing his drawings were the best education I got.”

Master of the Midcentury is equally edifying, attesting to “Cody’s inherent artistic ability, illustrated by many stunning images of his original Plein air sketches and watercolors, and his development as a draftsman, beginning with the dramatic architectural drawings from his USC studio design classes all the way through to the professional presentation drawings he created for clients,” says Jo Lauria.

“He didn’t have a personal style as much as a personal approach—he saw each project as a unique opportunity, which meant that there is remarkable variation in his projects,” notes Don Choi.

“St. Theresa Catholic Church in Palm Springs is, other than his own house, probably Cody’s most personal work. He used materials to powerful effect, ranging from the wood of the pews and glulam beams to the travertine of the altars and baptismal font. Graceful curves appear everywhere, from the exterior concrete walls to the upswept ceiling over the crossing to the cut-outs in the wooden beams. The variety of forms and materials speak to Cody’s mastery of architecture—his work here transcends what we usually think of as midcentury modern or desert modern.”

William F. Cody was “an ‘architect of his time’ in relating principles of contemporary architecture, structural engineering, and new technologies he had learned at USC School of Architecture and had expanded upon in his professional practice,” adds Jo Lauria, “but he applied these tenets, most notably, in his designs of residential commissions,” such as the Dorothy Levin Residence, which William F. Cody christened with full-height windows and a glass-roof solarium.

Design features of his homes promoted a West Coast lifestyle via “structurally thin rooflines that would make the house seem to float on the landscape, and walls of glass throughout the house that would cause the house to appear daringly transparent, dissolving boundaries between interior and exterior, and enhancing vistas to the mountains beyond,” Jo Lauria continues.

Low-rise forms, linear lines, single levels, modern pavilions, abundant glass—everything an expanse. All were the hallmarks of a proficient and deeply gifted master architect. William F. Cody capitalized on temperate climes, light, and landscape, and incorporated these elements in his work. In William F. Cody’s simplicity was a vision of some fantasy. We’re still fantasizing to this day.

Explore Story
“Ehrlich Yanai Rhee Chaney Architects works in a modern idiom but without a set vocabulary or language,” explains architect Takashi Yanai, a partner at the firm, its Residential Studio Director since 2004, and the current leader of its San Francisco Studio.
0
0
0

Explore Story
It’s on this narrow line between the ephemeral and the realistic that the firm performs their subtle, yet powerful, balancing act, creating homes that manage the trick of being both eminently livable and undeniably luxurious.
0
0
0