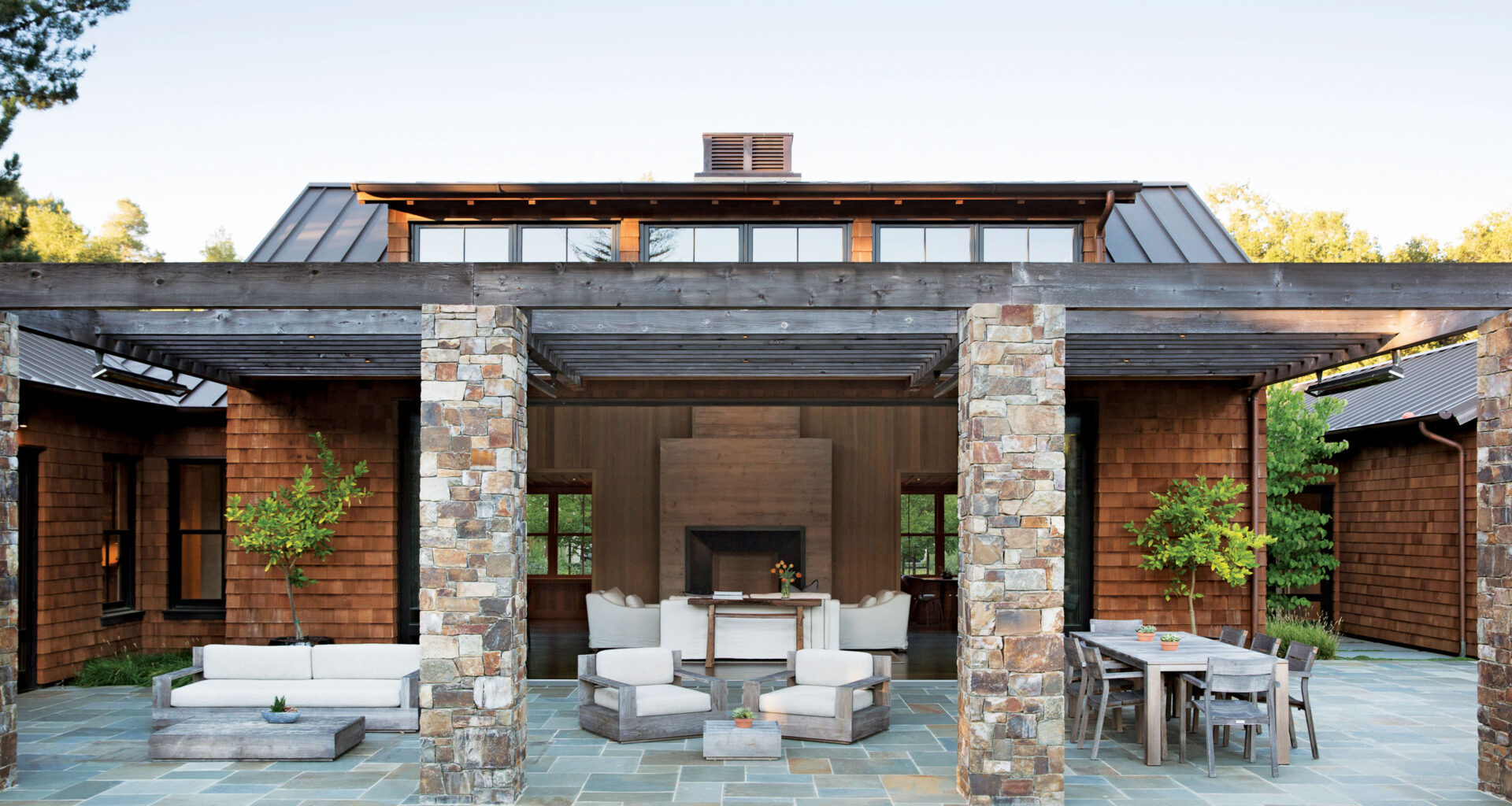 Richard Beard custom-designed this 7,000-square-foot house for a couple with young children. The property is ideally located in the Westridge area of Portola Valley, a desirable and exclusive enclave of the San Francisco Peninsula, close to Silicon Valley.
Total
0
Shares
0
0
0

“Every project draws from the land, and the process of design begins there as we integrate a client’s aspirations, culture, program and desire with context, perspective, sustainability, and resources.”

This site-specific approach is the philosophy of architect Richard Beard, who designed this 7,000-square-foot house for a couple with young children, while he was a principal at BAR Architects. Today, Richard Beard—whose father was a contractor and developer and grandfather was a land planner—is at the helm of his eponymous studio in San Francisco, continuing to nurture his fascination for how architecture has the potential to shape lives.

The owners immediately fell in love with the view of Portola Valley‘s Windy Hill to the southwest and asked the architect to make the most of the panorama through the design, while embracing “the rural vernacular in a sophisticated, yet understated composition of building forms,” describes Richard Beard.

“It was pretty clear right away that the site held a huge opportunity for a great design.”

Several challenges, however, had to be tackled to transform the dream into a reality, starting with finding the perfect spot to build the house.

“The southeastern side of the property was steeply sloped and heavily wooded with protected oak trees and through the middle of the lot a small ravine ran, innocently dry most of the year, but with the capacity to become a running stream under heavy rains,” Richard Beard says.

These characteristics led the architect to choose the northern side of the lot.

“The whole composition is one of unfolding and layering.”

Organized on one level, this home, which includes a pool house, has a roughly H-shaped plan. The five bedrooms are situated in the longer leg of the H, while the main living space is in the middle.

“The most important aspect of the layout is the marriage with the outdoor spaces,” says Richard Beard.

“The climate is wonderful, and it’s a quiet site with south-facing views. The house and adjacent landscaped spaces and courtyards are arranged so you are always connected with the outside, no matter where you are. It’s quite Zen in a way.”

The peaceful, warm and relaxed atmosphere is an all-day invitation to enjoy the views, which are revealed and framed in the different living spaces. Made by Vita Pehar, the lighting design complements and subtly highlights the soft color and material palette made of oak, fir, and cedar. Dauphine sconces by Circa adorn the entry hall, while Caravaggio pendants by Lightyears were installed in the kitchen. In the master bathroom, the team opted for Opus sconces by Waterworks.

For the architecture, Richard Beard drew inspiration from the Northern California Bay Area tradition, referring to the work of William Wurster (1895-1973) and Joseph Esherick (1914-1998), as well as the more casual versions of the shingle style. All these influences resulted in gable-ended roof forms that are linked together and clad in cedar shingles with dark trim.

Both comfort and expansiveness were at the heart of the design, which aimed at making the house feel bigger than it is. This expanded feeling is achieved through the use of outside space while still maintaining a cozy feel.

“This home is practical for a growing family, yet it has a pleasantly impressive architecture,” Richard Beard notes.

“It just lives so well. One day I drove up and the young son was jumping rope in the auto court. He was so happy there. And more than once, I’d see our client walking through and he’d just smile and laugh at how nice a space felt, or how a view was captured. That’s terrific.”

The connection between inside and outside—where Arterra Landscape Architects took care of the landscaping—is permanent and seamless.

“It is an understated and relaxed, outdoors-oriented country house, completely at home with its setting,” says Richard Beard.

“Being there is like meeting an impressive person who becomes a great friend.”

Explore Story
There is something about the desert that makes you want to spend time relaxing, observing and exploring. The colors and smells of the landscape, and the harsh yet beautiful environment where life surprisingly exists, among rocks and cacti, all contribute to this fascination. The architecture and interior design of these hospitality and residential projects perfectly capture the unique character of deserts across the West and Southwest.
8
0
0
Explore Story
Winter sports enthusiasts and nature lovers find everything they dream about at Caldera House, which opened its doors…
0
0
0