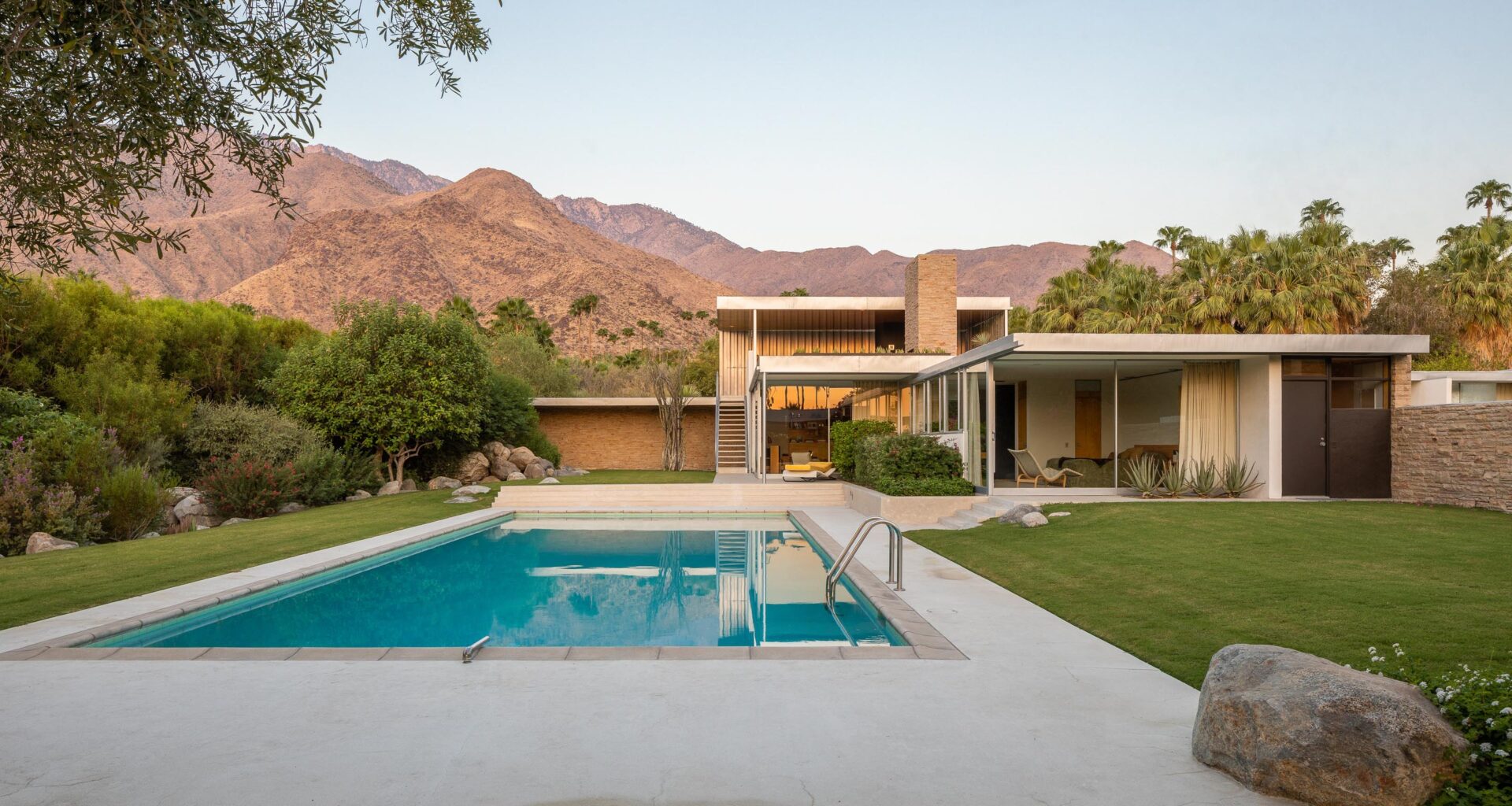 Architect Richard Neutra was known for his laser-like focus on the wants of his clients, and faithfully integrating them into his designs. Kaufmann House in Palm Springs was no different.
Total
6
Shares
1
0
5

In 1953, Richard Neutra’s “Survival Through Design” was published. The book was the architect’s treatise on how design could be a potent catalyst for a heightened human experience—particularly in the realm of our connection with nature. The book had been written by Richard Neutra throughout the 1940s, and many of his ideas no doubt crystallized during work on one of his most important commissions—Kaufmann House.

The origins of the Palm Springs house date to 1946, the year it was built by Richard Neutra after having been commissioned by Pittsburgh department store businessman Edgar J. Kaufmann Sr. It was to be a winter retreat from his primary residence in Pennsylvania; Kaufmann’s weekend house in Pennsylvania happened to be the splendid Fallingwater, designed by none other than Frank Lloyd Wright.

Significant is that for this commission Kaufmann had selected Richard Neutra, not Frank Lloyd Wright—preferring the former’s open, airy structures that helped inhabitants live in sync with their natural environment. When completed, Kaufmann House stood as a testament to the designer’s architectural premises: a roughly 3,200 square feet dwelling, cleanly articulated in stone, metal, and glass—and planted neatly in the midst of a striking desert landscape.

Arguably the most exclusive residential listing in the U.S. at the moment, Kaufmann House is represented by Gerard Bisignano of Vista Sotheby’s International Realty, architectural specialist, and South Bay real estate agent.

Gerard Bisignano’s forte is California Modernism, having represented another Richard Neutra—Kilbury House in Palos Verdes Estates—along with homes by Ray Kappe, Thom Mayne, Pierre Koenig and others. “The Kaufmann house really set the pace,” Bisignano points out. “This was just post-World War II and for the time it was ground-breaking.”

Five bedrooms are spread throughout the floor plan, which is assembled in a cross-like shape from which distinct wings span: there are two bedrooms in the guest wing, and another two bedrooms in the service wing. The core of the home holds the dining and living room, both neatly adjacent to the master bedroom—a sunlit retreat that’s fairly enclosed in floor-to-ceiling glass.

Remarkably, given the home’s 1946 vintage, is the absence of a corner post in the master bedroom, a feature that enables two glass doors to meet at a point, as if balanced in space. Slide the glass open, and one’s treated to an instant dose of fresh air, green grass and striking blue of the pool, a few steps away. Throughout Kaufmann House, outdoor living figures largely into the overall design, with fresh-air spaces incorporated side-by-side with interior ones.

The rectangular pool, for instance, is steps from the main living area. It balances the shape of the home, while injecting a refreshing element—water—into the desert palette of rocks and cacti. Head upstairs to the second floor, an open-air space Richard Neutra called the “gloriette.”

From here one is treated to sweeping desert views, including the grand silhouette of the nearby San Jacinto mountain range. “The gloriette draws you,” says Gerard Bisignano. “It brings the house into an amazing harmony.”

The history of the home has seen it pass from Kaufmann family ownership to others, including Barry Manilow. Changes were made along the way, disjointing Richard Neutra’s original design and intent. In 1993 Brent Harris and Beth Edwards Harris purchased the home, enlisting Los Angeles restoration architecture firm Marmol Radziner and Associates to undertake a painstakingly accurate restoration of the legacy property. The project, says Gerard Bisignano “ignited the whole Modernism restoration in Southern California, and Palm Springs in particular.”

Taking five years, the restoration of Kaufmann House was faithful to Richard Neutra, all the way down to the toilets and floors. The aluminum louvers—a distinctive feature of the home the architect initially developed as protection against the wind, which were later adopted as a mainstay of the building industry—remain intact. As do many of the home’s original built-in features, like cabinets designed personally by the architect.

“They even had a mine in Utah re-open, so they could get the original stone that Neutra used back in 1946, as part of the renovation,” says Gerard Bisignano. Notably new to Kaufmann House are updated mechanical aspects (air conditioning, plumbing and the like) and the addition of a pool pavilion—mellow, spacious and ideal for entertaining.

Sitting on 2-plus acres, Kaufmann House stands out with its clean-cut geometry, while natural materials, notably the Utah stone, keep it connected to the earth. As a foundational piece of American architecture, the home endures as an early and exceptional prototype of Desert Modernism—where the International Style of architecture was transposed to warm settings. Rather than shrink from nature, Desert Modernism embraced it: Inhabitants were freed from indoor-only living, their lives invigorated by sunlit skies and warm days. “For those who appreciate architecture,” Gerard Bisignano says of the house, “it’s like walking into a storybook.”

In 1947, famed architectural photographer Julius Shulman shot a twilight image of the new home—one of several notable images that memorialized Kaufmann House in the minds of the public. (Rivaling Shulman’s is the colorful 1970 photo by Slim Aarons, Poolside Gossip.) Decades later, in the late 90s, Mr. Harris convinced a then-retired Shulman to come to Palm Springs and re-photograph the newly restored home, this time in color.

Harris shared the images with Gerard Bisignano, who had worked with the couple on two architectural homes in the South Bay. Poring over the images, Bisignano marveled at the fine artistry of the home, and at that moment, his passion for architecture was struck. “I hope to represent many more homes,” he remarks, “but there will never be anything like Kaufmann House.”

Explore Story
Rarely does a Rolling Hills home that checks all of the boxes come on the market…Dalinger Designs, the mastermind behind this rustic Spanish estate set on almost a half-acre of land in this hills of L.A.’s sought-after Mount Olympus neighborhood.
0
0
0
Explore Story
A rare opportunity to own a luxe oceanfront condo along San Francisco’s Embarcadero has emerged at the corner…
0
0
0

Explore Story
Among this collection of exquisite real estate, it’s the homes tucked between San Vicente, the bucolic passageway to the rest of Los Angeles, and Montana Avenue, its bustling boulevard of exclusive boutiques, sumptuous restaurants, and well-stocked markets, that are most desirable.
0
0
0
Explore Story
Rolling Hills has a record (33) homes that are currently on the market, that’s 12% above last July and represents 16 months of inventory – just shy of the all-time high of 16.3 reached in July 2009.
0
0
0