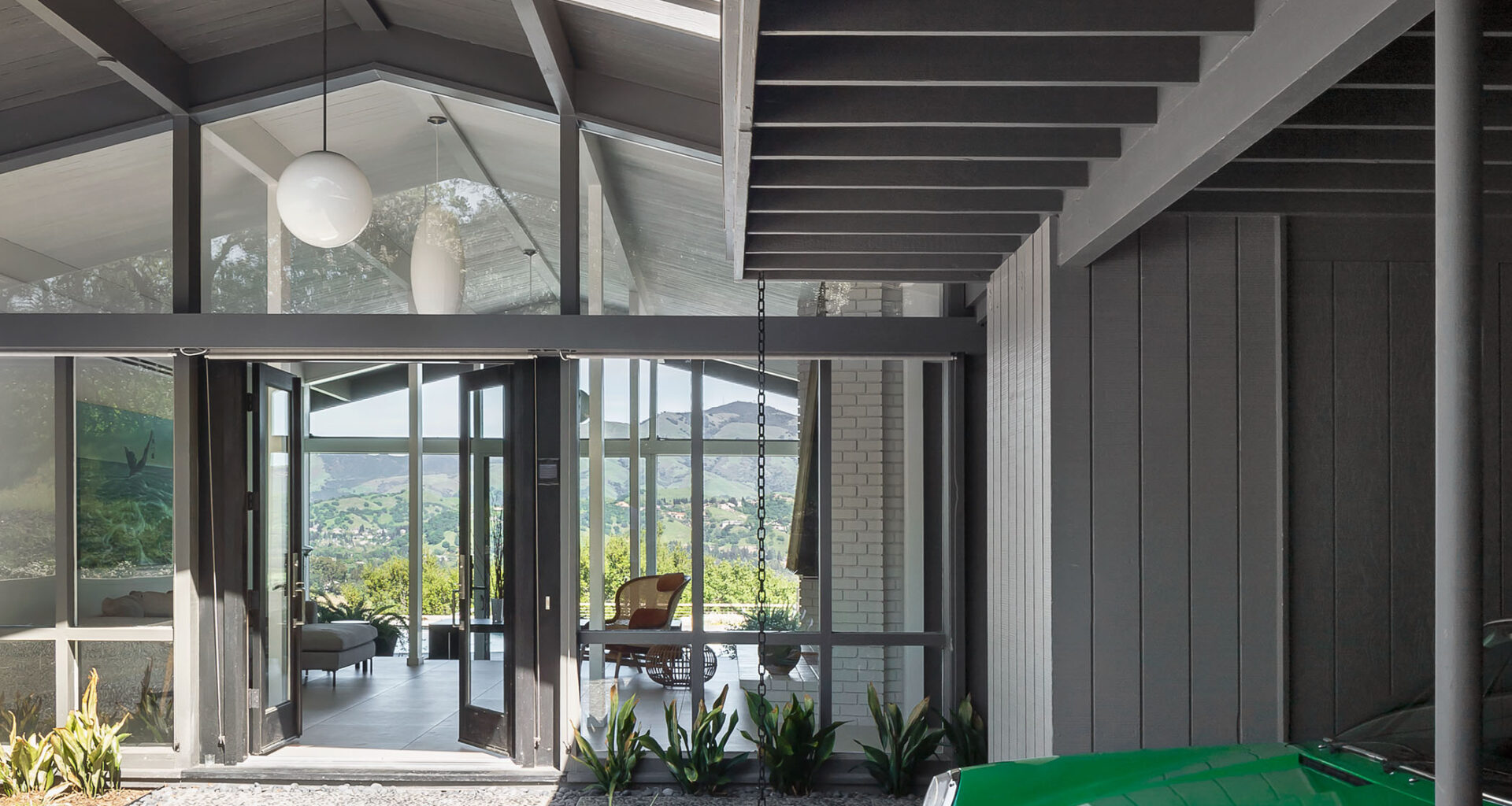 During three years of hard work, Framestudio managed to preserve the soul of the Henry Hill house while simultaneously injecting the elements that now make it a contemporary home.
Total
0
Shares
0
0
0

Having the discipline to not upstage the original architecture by constantly questioning ‘What would the original architect do?’ was the biggest challenge,” says Chad DeWitt, the founder, and creative director at Northern California-based Framestudio, referencing this project located in Alamo, 20 miles east of San Francisco. Initially built by Henry Hill & Associates in 1959, the mid-century modern hillside home needed a makeover to feel up-to-date.

The owners already knew the Framestudio team, who, five years prior, helped them remodel their previous home, allowing this second project to come naturally. With their two sons now off at college, the couple felt they needed a change of scenery. The uniqueness of this property, however, convinced them to stay in Alamo, just a few miles up the road from where they had lived for the past 25 years.

“The clients are drawn to a very understated aesthetic, so we looked past the predictable ‘martini-modern’ look, taking our inspiration from Swiss designer Pierre Jeanneret and Cuban designer Clara Porset,” Chad DeWitt says of the inspiration. “Their brand of modernism was less refined, simple, and strongly driven by the materials and craftsmanship of the community they were built in.”

After updating the mechanicals, Framestudio focused on the “good original elements and discarded the bad,” seeking “to create timeless interiors as if Henry Hill himself had envisioned them.” In addition to keeping—among other features—the full walls of glass and four fireplaces throughout the remodel, the studio’s approach also guided the team to select restrained, timeless finishes.

Passionate about modernist architecture in the Bay Area, Chad DeWitt was energized by the opportunity to once again restore and reinvent a project designed by a notable architect, adding his contemporary touch while respecting the original vision.

“As the Bay Area ceramicist Edith Heath once said: ‘Design is a system of values,’ he says. “We couldn’t agree more.” For Chad DeWitt and his team, the emphasis should be on human values with thoughtful and long-lasting designs dedicated to supporting well-being.

“That’s why we believe in looking towards the past as much as looking to the future for inspiration, being careful not to forget that simple, common-sense solutions have served us well for years,” he adds.

Overlooking the San Ramon Valley from the west, the home offers views of Mount Diablo that are seen especially well from the glass-filled living room. Two wings emanate off of this space, creating a boomerang plan and allowing every room to connect with nature.

One of the wings consists of the lounge, kitchen, dining room, and den while the other embraces three bedrooms. The peaceful and sublime landscape, meanwhile, inspired the color and material palette throughout the home. “We used wide plank oak floors and unglazed tiles in muted earth tones, making reference to the beauty of its surroundings,” DeWitt says. Indeed, the ultimate goal for Framestudio was that “nothing must distract from that view.”

Always considering sustainability, Chad DeWitt made no exception with this project: windows were upgraded with dual-paned, insulated glass; thermally broken window systems were installed; insulation was added to the walls and ceilings; the membrane roof system was painted white to reflect the sun and cool interior spaces; overscaled roof eaves stick out almost 10 feet, blocking the afternoon sun and keeping the house naturally cooler; and water taps, showers, and toilets are low-flow to conserve water.

The outdoor areas, landscaped by Orr Design Office, also nod to the environment, with fire-resistant plantings complemented by an irregularly shaped swimming pool. The exterior space is yet another invitation to slow down and contemplate the panorama.

Living here is “as if you’re inhabiting a black-and-white Paul Strand photograph or a Kumi Yamashita sculpture,” according to the members of Framestudio. As for DeWitt, “This home is an oasis of calm, a place where the passage of time and the seasons can not only be observed from the windows but also experienced through the play of light and shadows that animate the home throughout the day,” he concludes. framestud.io