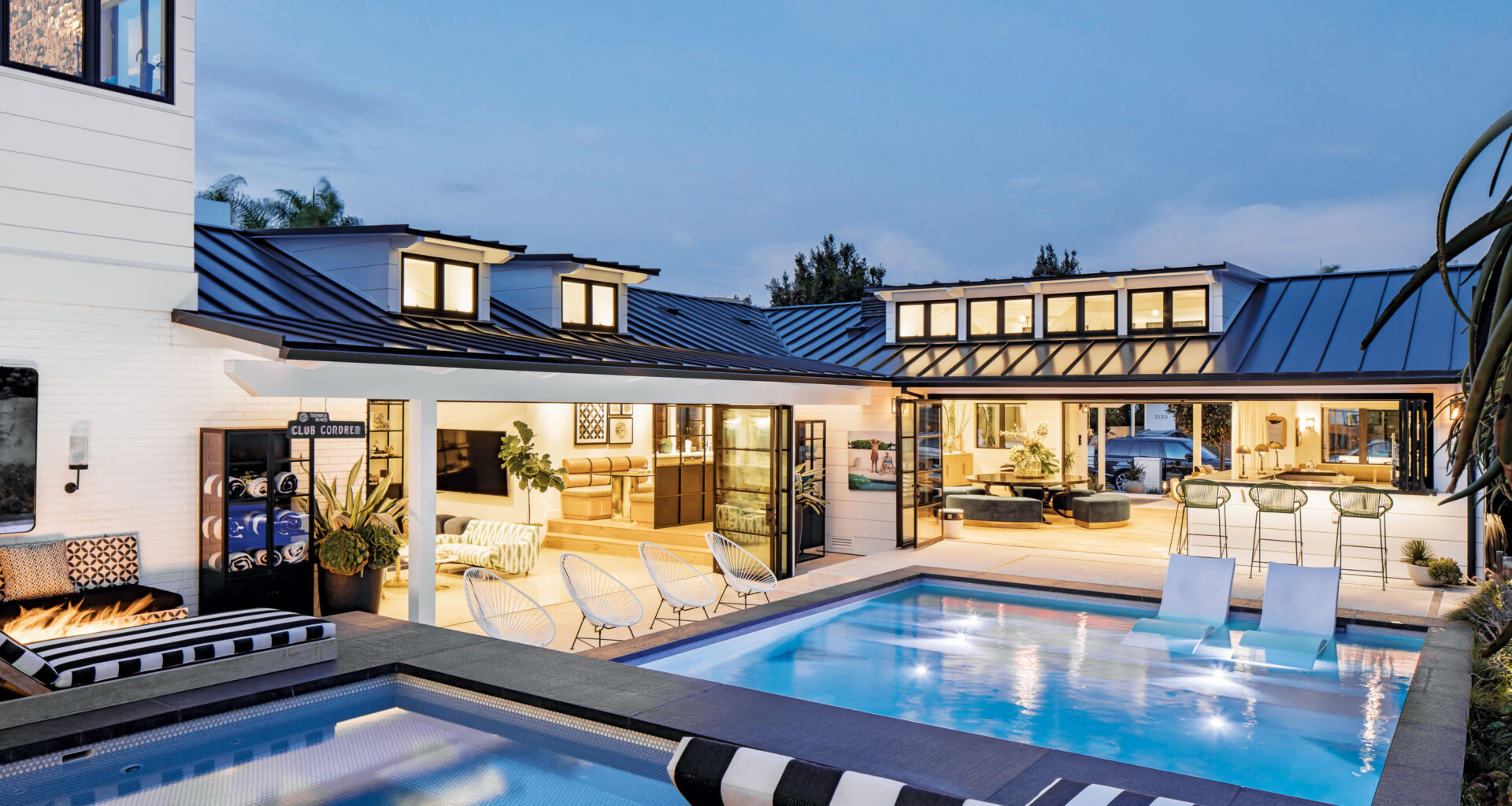 The beach is only a few blocks to the west, and a short stroll brings you downtown Hermosa Beach or to The Strand. Nestled in this neighborhood along Power Street is a spacious property that embodies the gathering spirit of the place.

“You have a number of large lots close to the beach, along with a great mix of big, new homes and charming, original ones,” says real estate agent Robb Stroyke of Stroyke Properties Group and Bayside Real Estate Partners about the location.

As for this particular property (expected to hit the market this spring), he adds: “It’s resort living at the beach, with lots of space and privacy—and that’s really hard to get four blocks from the sand.”

But for designer Jon Starr, the 5 bedroom and 6 bathroom home—poised on a notably oversized lot of approximately 21,300 square feet, or nearly half an acre—is much more than that. Jon Starr lived on the street and spent many wonderful hours at the property prior to re-working it with homeowners Erin and Hilary Condren, and Mark Anello of Mark Anello Construction.

“It was the social mecca for a lot of people on the street,” says the designer, who credits the Condren’s, two creative entrepreneurs, for crafting the vision of this distinctive Southern California family home.

Taken down to the studs and rebuilt, the 6,000-square-foot home was completed in late-2016 and is premised on offering lots of freshly cheerful and chic gathering spots—with the more, the merrier. The home is centered around its vibrant central courtyard, but the welcome starts at the front yard; which is really more of an outdoor lounge, with its inviting seating scheme, desert landscaping, and a blazing fire feature.

“That was the concept that would bring people in,” says Jon Starr of the home’s street-facing presentation: “You sit on the front porch in a rocking chair and start talking to your friends and neighbors, and everyone’s welcome.”

Once indoors, free-flowing, and open are the keywords of the floorplan, which features sculpted gathering spaces, both indoors and alfresco—all separated by the slenderest of borders. So unobtrusive are the disappearing walls of sliding glass it’s hard to keep track of whether you’ve stepped indoors or out.

Main spaces include an elegantly minimalist kitchen anchored by a gleaming white island, where guests can dine on a raised wood bar. Look a bit closer, and one finds a commercial kitchen with a full suite of gleaming chef-grade appliances, all purposefully selected by restauranteur Hilary Condren.

“My husband is a fantastic cook, so the kitchen was super important,” notes homeowner Erin Condren.

Even the placement of the cooking appliances—facing outward, versus towards the wall—was geared towards being part of the scene.

“He didn’t want his back to any of the fun,” she says of her chef spouse, “or to miss the party because he was in the kitchen.”

If the party is outdoors, or the guest list so grand that more cooking space is needed, there’s another fully outfitted kitchen outside, this one with an Italian pizza oven.  (Handy also are the home’s three dishwashers, which complete full cycles in a mere two minutes.)

“It’s all about engaging within the house, instead of looking away,” says Jon Starr about the orientation of spaces. Even the airy living room, with its white cathedral ceiling and a flickering fireplace, has a “conversation pit”—a cozy, sunken seating area where people tend to congregate.

So is any one of the bars, found indoors or outdoors, or fresh-air lounges, whether situated on the green lawn or warmed by one of the home’s four fire features. There’s even a sprawling, peaceful garden situated on an elevated swath of land at the rear of the property.

“There are so many places to entertain,” points out Robb Stroyke, recounting how a 200-person wedding was once hosted on the property.

“One of the many things I love about that property is that it’s very unassuming from the street,” explains Condren. “And I think people are just blown away as they come in and keep walking, and realize what an incredible piece of property it is.”

Each of the five bedrooms is thoughtfully styled, with an emphasis on connecting to the outdoors. Notable is the master bedroom with an exposed beam ceiling and doors that open onto an elevated sun lounge, complete with a bubbling spa. Handy also is the guest quarters, tucked away on the upper level and equipped with a butler’s kitchen.

“You want to get into the client’s mind and thoughts, and understand how they want to live,” says Jon Starr of the design process. “How do they socialize? How do they live as a family?”

In this case, he didn’t need to ask a lot of questions, since he already knew the answers. He knew, for instance, the Condren’s intended the home to be an inviting place to put one’s feet up, and enjoy life with friends, family, and neighbors. A place to optimize joy and togetherness.

“It’s such a special place and it’s held such great memories,” muses Condren. “It’s fun to think about who we might be passing the torch to.”

Explore Story
At approximately 11,000-plus square feet, the estate spans 6 bedrooms and 7 bathrooms and is positioned on a high-altitude lot that’s been as lavishly considered as its grand, sun-splashed interior.
0
0
0
Explore Story
The extravagance of architectural styles in Mexico—buildings rich in characteristics, color, and materials—makes for a vibrant texture throughout the country.
1
0
1