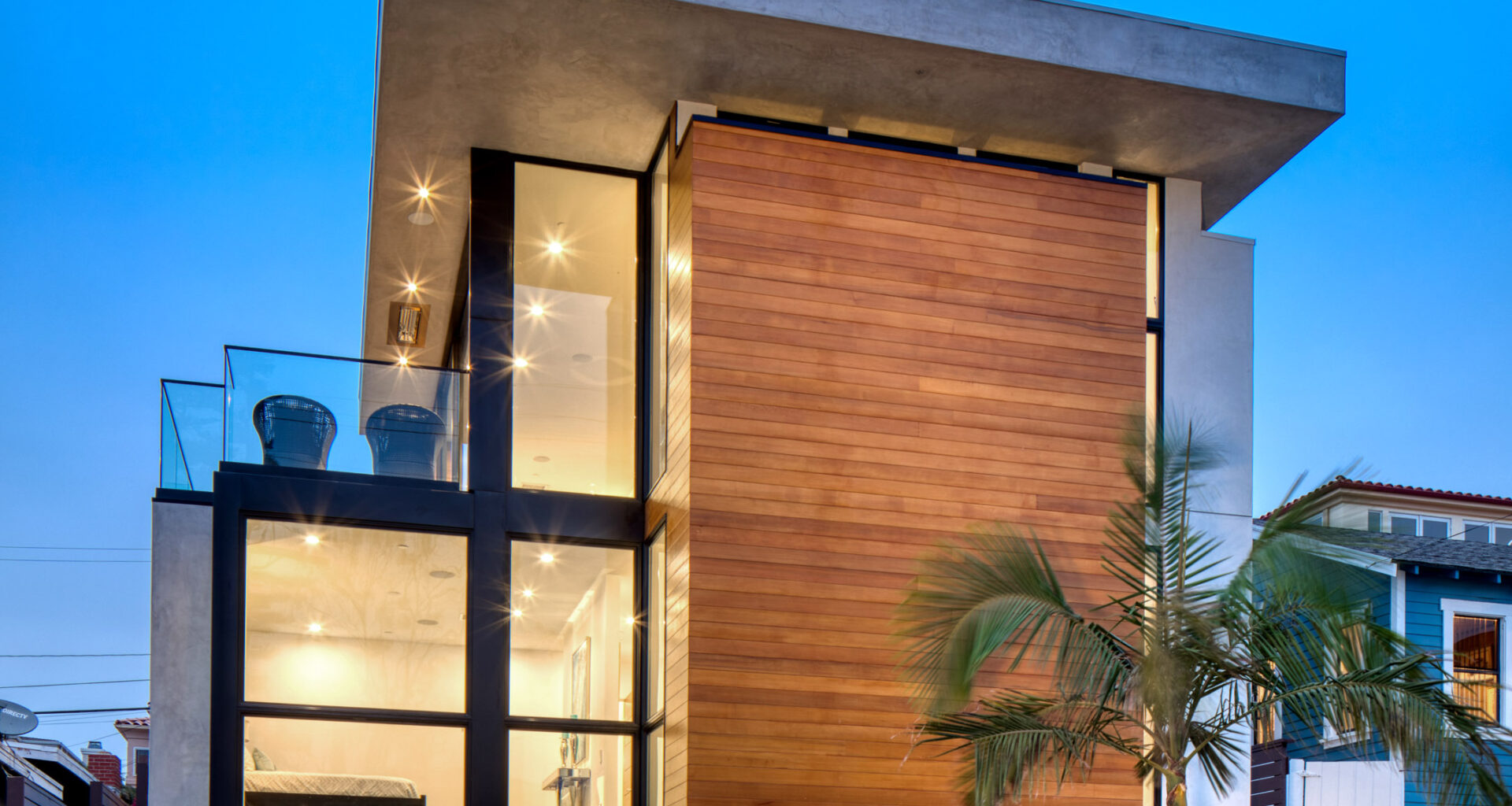 “It’s been fun putting the project together because it’s such a nice piece of architecture,” says tradesman and developer Kent McKeown. “This is the quality of a house you would see on the Strand or a walk street.” He’s talking about a new, view-packed Modernist home he erected along a hillside of 7th Street in Hermosa Beach, just east of Pacific Coast Highway. The home is the aesthetic partner to another home he’s built directly behind it on the double lot, with a separate entrance on 8th Street.

For the project Kent McKeown, a South Bay native and shoring contractor (he owns KLM Engineering), enlisted home designer Daryl Olesinski, whose striking residences are increasingly popping up throughout the Beach Cities and Palos Verdes. Daryl Olesinski designed both homes in tandem with Martina Linden, his wife and partner at their design-build firm, O+ L Building Projects.

“We work together on everything,” Daryl Olesinski explains. “There isn’t a decision that’s made that I don’t bounce off her, and there’s not a decision she makes that’s not bounced off me.”

“It just had to be right,” says Kent McKeown of the project. It’s the true tradesman’s reflex to execute every detail at the highest level, and his was strong on this undertaking. Kent McKeown acted as general contractor and, in addition to O+ L, for interiors, he brought in West Hollywood’s Paul L’Esperance, whose work can be seen in a slew of high-profile commercial projects, from Greystone Mansion to the Egyptian Theatre, as well as a portfolio of showcase homes throughout the Beach Cities and Los Angeles. A nice touch to the home’s staging are works by local artists that have been curated by Kent McKeown’s stepdaughter, Christine Harris, an art consultant affiliated with the South Bay Artists Collective.

The 7th Street home embodies a central O+ L design principle: To create a residence that naturally corresponds to its land.

“We spend a great time on the site, just trying to really learn about it and what it wants…on it,” says Daryl Olesinski of his and Linder’s process. “To maximize what, where, and why it is.”

To that end, Daryl Olesinski explains, the home was designed to “have a conversation” with the view to the Southwest—a dreamy expanse that covers the perpetually blue-lit Pacific Ocean, along with the curves of Palos Verdes Peninsula.

On the top floor, for instance, a wall opens, meshing the indoors with an ocean-air deck—an abundant space not formally figured into the home’s official square footage. Along with the home’s plentiful views, such an outdoor space makes the home live larger than its approximately 3,100 square feet, and host its four bedrooms, four bathrooms, and three stories—linked together with an eye-catching horizontal rail system—with ease.

Speaking of views, one would be hard-pressed to find such scenery west of Pacific Coast Highway, Kent McKeown notes. So special was the panorama when L’Esperance designed the interiors, he took care to make sure it was not compromised. “We watched closely to not have a lot of hanging lights because of the view,” he says. A dining room chandelier was nixed as well.

Contemporary and sleek were design keywords for L’Esperance on this project. “We wanted to have a wow factor but also extremely clean,” he explains. In the kitchen, he utilized a light-hued grainy material, man-made and designed for longevity alongside good looks. “It will really stand the test of time,” offers L’Esperance. Setting the stage in the master bathroom is a mosaic of tile, a glossy Ann Sacks mosaic among them.

“It’s a real show-stopper,” he says of the room. “It’s more like a spa because you can walk in and out of this huge shower. It’s an open but private experience.” The master bathroom continues Olesinski’s dialogue with the view. Situated on the home’s southwest corner, strategic placement of windows—most of them spanning floor to ceiling—let in a kaleidoscope of natural hues and skyscapes throughout the day and evening.

“We favor a very warm and welcoming Modernism,” says Olesinski of he and Linden’s overall aesthetic. It’s an approach this project displays to the max. On the exterior, crisp geometric shapes, such as a flat overhanging roof that gives the appearance of a concrete slab, are wrapped in glass and softened with earthy materials: in this case, exterior siding made of engineered cedar preferred to keep the softwood locked in place, and topped with an Enviro stain to protect the wood and enhance its tones.

Desert landscaping and a palm tree along the curbside are additional welcome notes, as is a wide staircase that leads to the front door. “It’s definitely something that you can be proud of,” says Kent McKeown of the finished product.

Having worked for famed South Bay Modernist Pat Killen at his firm, Studio 9one2, for a few years earlier in his career, Olesinski is more than adept at putting together the elements to make a standout California beachside home, one that is striking while utterly livable, with this residence yet another example.

“We truly and firmly believe that a good building will improve peoples’ lives,” Olesinski says of his and Linden’s design mission. “Our goal is that when we finish a building, the owners can’t possibly fathom living anywhere else.”