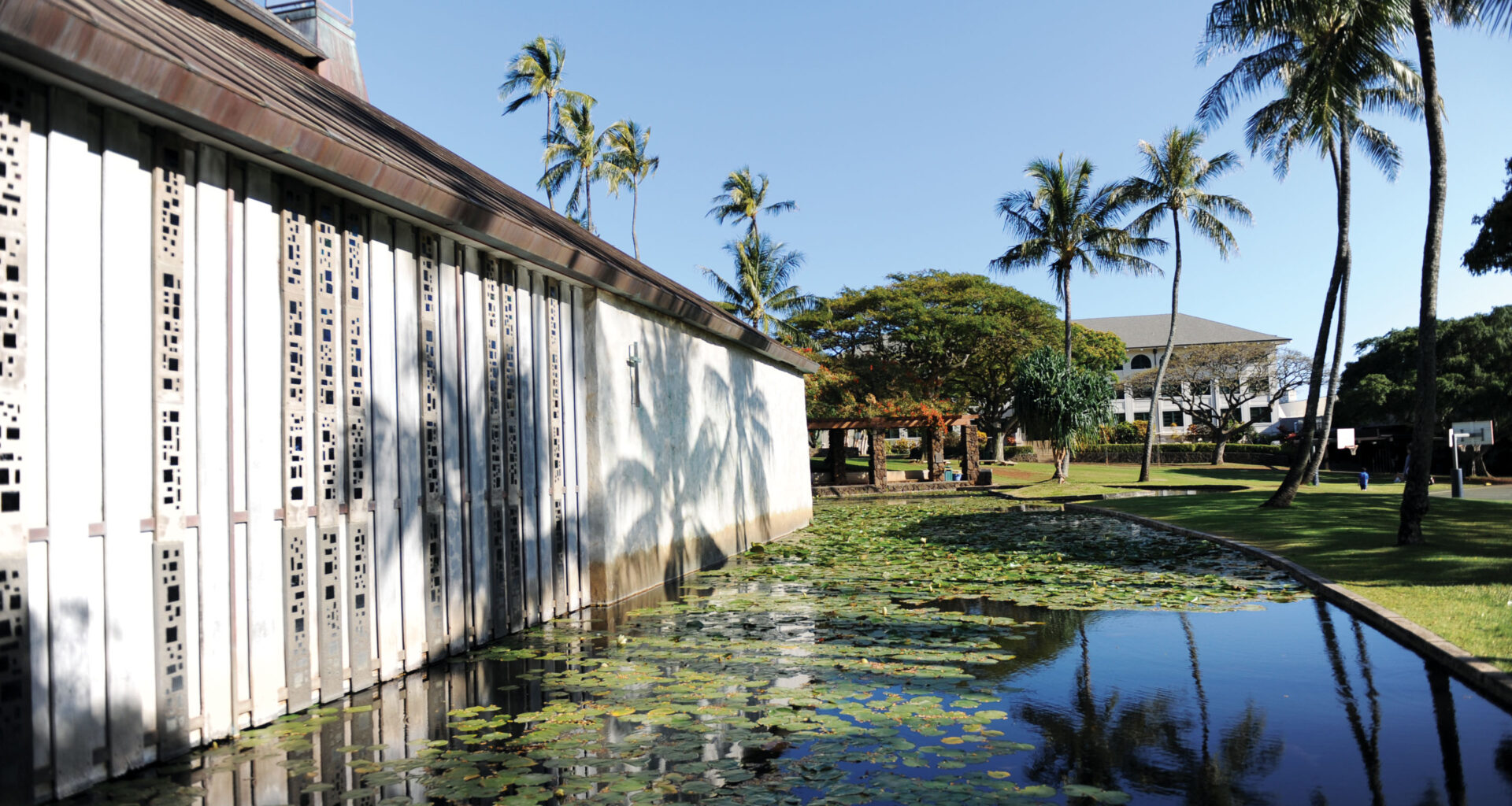 The guiding spirit at Punahou School, the Honolulu institution that graduated a young Barack Obama, is the Robert Shipman Thurston Jr. Memorial Chapel. Its namesake, a member of the school’s Centennial Class of 1941, was a student at Yale at the start of the Second World War, but eventually left the Ivy League for flight training and earned his wings in 1944.

A first lieutenant, he served with distinction in the Pacific but was killed at the end of the war. In this sense, the chapel—a gift from Thurston’s parents in memory of their only son—was born from the call of duty, only to heed the highest call of all.

Yet another son of Honolulu, and the father of Tropical Modernism, built Thurston Memorial Chapel in 1966—Vladimir Ossipoff. In applying his mastery of the midcentury modernist form with the touch of a pluralist (Vladimir Ossipoff was born in Russia, raised in Japan and educated in California), the architect designed the chapel to create the impression that is rises up from Punahou’s famed Lily Pond.

He did this by lowering the floor to bring the Thurston Memorial Chapel physically closer to the pond, which was formed from a natural spring; part of the pond has always been integrated within the chapel walls. It is a credit to Vladimir Ossipoff’s stunning calculation of site and surroundings that the chapel so beautifully and seamlessly assimilates with both lands and lives.

At a 1967 dedication to the Thurston Memorial Chapel, Vladimir Ossipoff offered keynote remarks that detail the finer points of his design for a congregation he described as “an ebullient group of youngsters.” Intending “to subdue just a bit, their high spirits, which tend to have a correspondingly high noise level, we have purposefully subdued the internal lighting,” he said.

Of the chapel’s courtside Ossipoff referenced generous eaves extending from the building, with one going down a few steps to “gain shelter as a little chick must do when seeking shelter under its mother hen’s outspread wings.” He called the exterior court and lanais a “Hawaiian Cloister.”

One is quite right to appraise Thurston Memorial Chapel as an intersection of art, architecture, and spiritual shelter, with its mix of materials and light infusing the building with reverential warmth. The reserve of the design, which is humanly scaled, ensures that the judicious use of aesthetics serve this soothing purpose.

Made from koa wood and sculptured panels of copper repoussé inspired by student-suggested scenes, the entrance doors are especially memorable; from the hundreds of suggestions offered, 32 were presented to artist Jean Charlot and from his original drawings they were completed in copper by island artisan Evelyn Giddings.

Also glorious are the panels of stained glass by artist Erica Karawina. Combined with the architecture’s play of light and shadow, its responsiveness to nature and contribution to Hawaii’s visual and spiritual culture, Thurston Chapel is a source of inspiration in every possible respect.

Explore Story
The multitalented musician Beck is selling his Gerard Colcord-designed home in Mandeville Canyon for $3.75 million The Grammy…
0
0
0