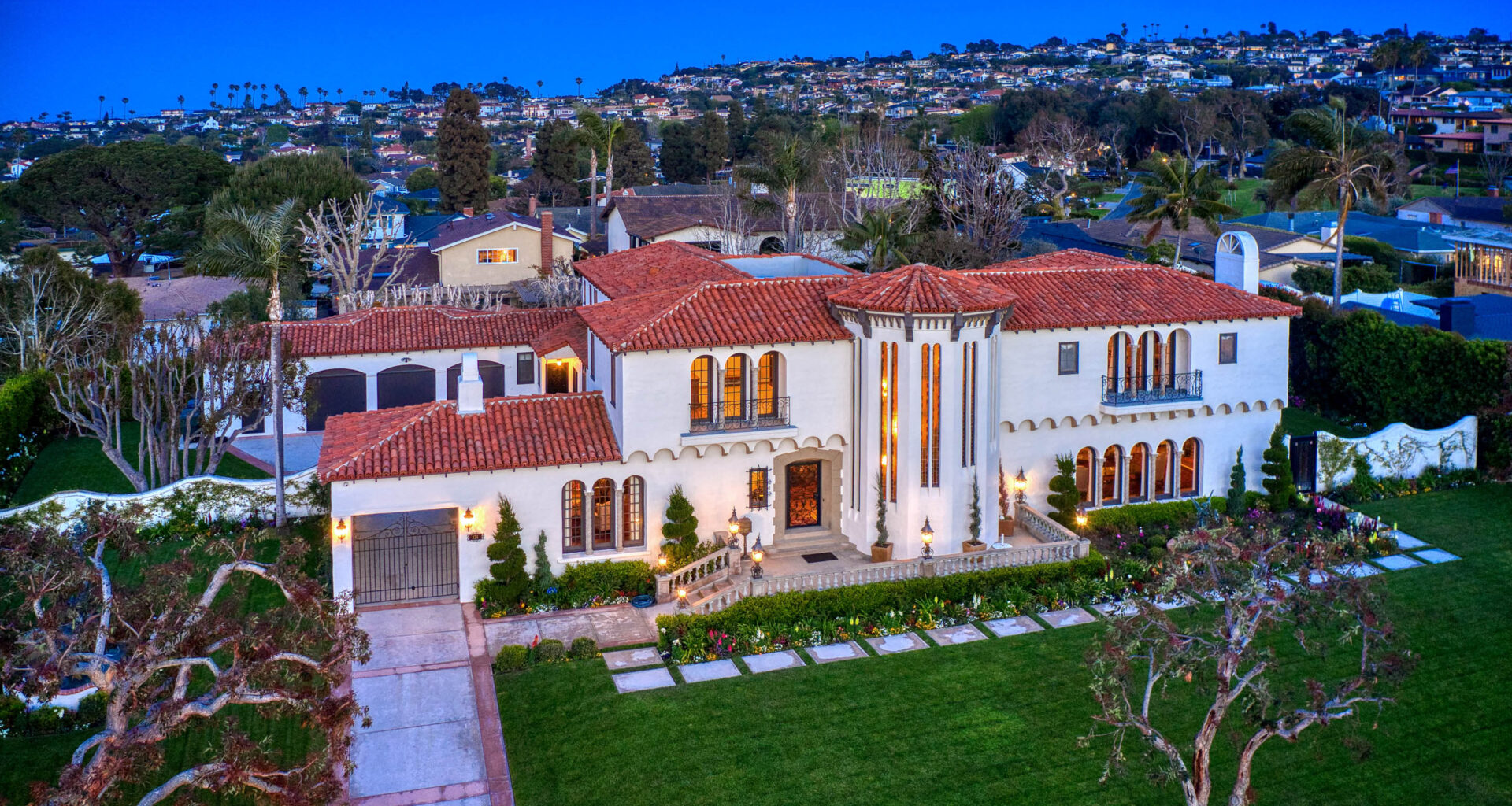 The Grandest Dame: 124 Via Monte D’Oro

This no-expense-spared venture was completed in the late 1920s, consisting of a two-story residence, approximately 7,000 square feet in size, and situated on half of an acre.
Total
0
Shares
0
0
0

An Opulent 1920’s Villa, the First Home Built in the Hollywood Riviera, Showcases a Storied Past and a Fresh Face for the Next Century

Clifford Reid was a real estate developer who, like many during the 1920s, had come out West to capitalize on the rush of development happening in Southern California during this dizzying decade. His visit to what is now the Hollywood Riviera in Redondo Beach—then wholly undeveloped, but with a comely mingle of blue sky and Pacific Ocean beachfront set against green palms and sloping hillsides—sparked an enterprising dream.

A subsequent trip by Clifford Reid to the French Riviera, coupled with his interest in the motion picture industry, added texture to his vision.

“It created this thought in him,” says real estate agent Ed Kaminsky of The Kaminsky Real Estate Group at eXp Realty & Concierge Auctions: “Why doesn’t he duplicate the homes that are so beautiful in the French Riviera, these Spanish-style homes that overlook the ocean there, and put them here. Then tell people in Hollywood they could come down the coast to the South Bay, where they too could get a home overlooking the ocean with that same look.” And the same experience of getting away from it all in the midst of a Mediterranean-like coastal splendor

A true believer and the person who coined the area’s namesake—the Hollywood Riviera—Clifford Reid built a showcase of his concept. It was to be the first home in the area and his personal residence, located less than a mile from the sand and surf.

During its construction, Clifford Reid brought in artisans from Europe to shape its details big and small, like al fresco painted ceilings that took nearly three years to complete. The result is a grandness wrought from authenticity; every corner has been attentively crafted to a perfectionist’s standard, often using materials that one would be hard-pressed to find nearly 100 years later.

“Every time you turn in this house you see something of the Old World,” notes Ed Kaminsky. “It’s like going to Europe and walking through a castle.”

Fortunately, the six-bedroom and the seven-bath property has seldom changed hands since Clifford Reid’s day, and there have been no significant changes made to its floorplan or swapping out of its fine materials. In late 2016, Danny Gerardi, whose personal connection to the home spans decades, purchased the home from the previous owners, who had lived there for about 50 years.

“He transformed it back to its original glory,” explains Ed Kaminsky, “and restored anything that needed to be restored.”

Like Clifford Reid, Danny Gerardi brought in artisans from around the world to ensure the original aesthetics and atmosphere of the home were maintained. “I tried to keep the house as close to what it would have been,” the homeowner points out. “And when I restored it, I restored it with materials that went back to 1928.”

He also had an 18th-century fountain from the Florence home of the late Malcolm Forbes installed on the front yard. A chandelier, dripping with Baccarat crystal, and also circa the 18th century, was placed in the entrance room—an airy, fitting place decked in hand-painted floor tiles. “It took eight workers to hang it,” Danny Gerardi says of the chandelier.

Original pieces of furniture, still in the home from its founding, were meticulously reupholstered, and he sourced the home’s lush drapes from fine silks found around the world. Cranes were responsible for settling in silk rugs, and the home’s original Steinway was transplanted to the master suite.

Committed to restoring the home to its original splendor, Danny Gerardi describes how he once met a person in Rome who could expertly refresh the details of historic villas. After purchasing this home, he retrieved her card and hired her to come from India in order to clean the home’s alfresco painted ceilings and restore the minor cracks in the cured plaster stone walls in that decorous entrance room.

The most dramatic changes to the home occurred in the bathrooms and kitchen. All were created anew under Danny Gerardi’s watch, who kept faithful to the home’s original design vernacular—that of tastefully bound opulence.

“I put it a stove from Tuscany in the kitchen,” he says of the refined white kitchen, which combined two former kitchens and strikes a keen balance between bygone elegance and uber-modern utility. The gleaming Sub-Zero refrigerator, for instance, was customized with peekaboo glass to hint at an early 20th-century vintage.

“I thought it would take seven or eight months,” Danny Gerardi recounts of the home’s refresh. “Little did I know,” he laughs. The home’s plumbing and electrical system were replaced with top-of-the-line modern ones, and the yard was completely overhauled. These days the landscape is a colorful menagerie of old-growth foliage and vivid flowers, which are set against a cleanly manicured green lawn, much of it gated and private.

“We had a wedding there with over 300 people,” Gerardi says of the property. “You wouldn’t have known there were even a hundred people there, the way the house handled it.”

Today, as it was nearly 100 years ago when built, the home serves only to further beautify life at this charming coastal location. Never-ending scenes of soft blue ocean stream into windows and French doors along the 40-foot master bedroom. Gauzy coastal light and dramatic sunsets seep into every room, and whether standing along a colonnaded balcony, or entertaining friends in the upright elegance of places like the dining room, where doors open to aromatic gardens, it seems like a perfect stage.

“It feels like a dream,” Danny Gerardi says of the home’s atmosphere. “It’s so quiet and peaceful. It’s magical and the rooms are so warm.”

Fitting too is its location, a quiet neighborhood that feels enclave-esque, yet is less than 10 minutes on foot to the beach or to Riviera Village, where mellow boutiques and eateries line its wide streets.

“It’s an opportunity to live in history while enjoying modern amenities,” says Kaminsky of the property. “The Old World is still heavy and breathing in this home.”

So distinctive is the property that it’s being sold via Concierge Auctions, and bidding starts on May 7. At Concierge Auctions, the focus is specifically on rare and luxury properties; they’re the largest property auction house of its kind in the world, with a well-established global and online footprint.

“Research shows that if a luxury property hasn’t sold within ninety days, it will likely remain on the market for the next three to five years, and eventually sell for a fraction of the original price,” says Sue Demarest of Concierge Auctions. “With the limited luxury property buyer pool, especially with homes in the ten million dollar range and higher,” she adds, “Concierge’s platform delivers results in sixty days.”

“This is called a ‘no reserve auction,’” Kaminsky explains, “which means there’s no minimum bid.” It’s a process that’s right for a rare property, and one where buyers can ultimately determine the market value of a home where the price is not quite an objective matter. It’s also a process that can offer buyers comfort, he adds, “because they know, whatever their bid price is, that there was someone right behind them willing to buy the house for a few dollars less. It’s a transparent process that’s very helpful to the buyer.”

Danny Gerardi was 9 years old when he first walked past the fancy house on Via Monte Doro. At age 10 he had finally mustered up enough pluck to knock on the door. “The lady that lived there answered the door and I became one of her dearest friends until she died,” recounts Danny Gerardi.

Decades later he would close escrow on “the castle” that, as a child, had held his imagination and wonder, and where he had spent many happy hours with his friend. Despite his regard and affection for the place, his decision to move is a pragmatic one—he’s simply not in town enough. But having refreshed the home for its next chapter, he now remains indelibly linked to its story as one of its most dedicated stewards.

Explore Story
Originally from Atlanta, Georgia, Mark Kitching found his true home among the bustling, eclectic and artist-driven streets of Venice Beach after moving to California 13 years ago.
0
0
0
Explore Story
Perception and reality have been forever changed in 2020 as almost every facet of life has been altered in one way or another. Where the only constant is change, bringing with it dilemmas for marketers.
0
0
0
Explore Story
An Enviable Oasis, a Contemporary Home in the Select Bird Streets Enclave Epitomizes the California-cool Lifestyle This modern…
0
0
0
Explore Story
A sleek, museum-quality home by Michael Torrey of Avalon Construction Corp mixes the best of Malibu living with…
0
0
0