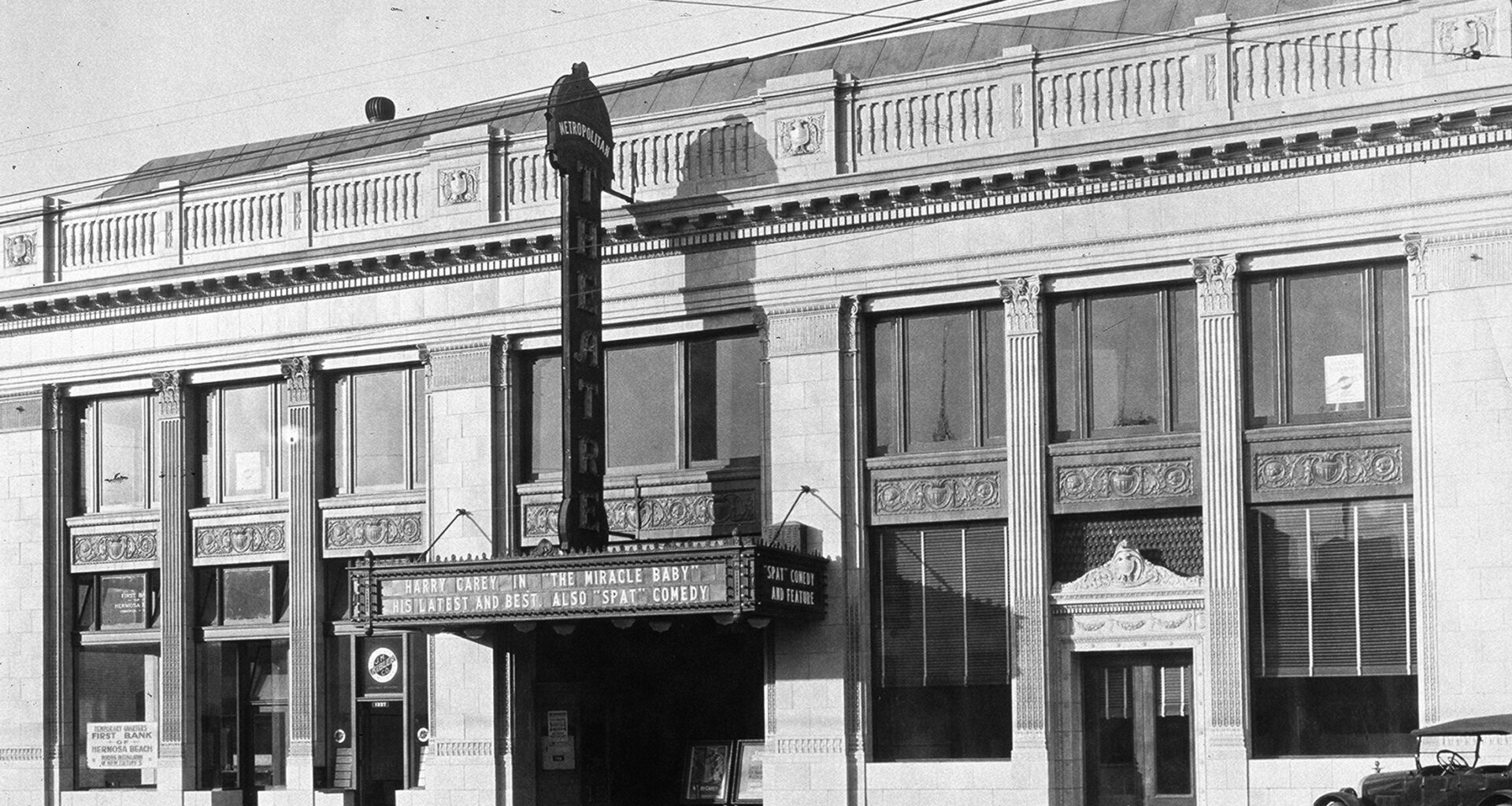 The Bijou Theater: A Hermosa Classic

We take our limitless entertainment choices for granted, ranging from countless movie theatres with 3-D special effects, to DVDs delivered to our door so we can watch movies in the comfort of our own home.
Total
0
Shares
0
0
0

In 1923, it was big news when the local paper announced that a $200,000 theatre would be built at the southwest corner of 13th street and Hermosa Avenue – the only one of its kind for miles around. Fifteen years after Hermosa became the nineteenth incorporated city in Los Angeles County, a local banker, Ralph Matteson, had the ambitious idea to build a movie theatre in Hermosa. Detailed plans were drawn up for a 1,200-seat structure housing a $20,000 pipe organ, and a contest was held to name the new theatre.

For the Metropolitan’s grand opening, the ornamental, Neo-Classical style theatre premiered Circus Days, starring Jackie Coogan, who later became a resident of Hermosa Beach. Several novelty acts performed, and it’s said that the enthusiastic crowds finally emptied out of the theatre well after 2:00 in the morning.

Other classic films screened in the Metropolitan’s early years included She Done Them Wrong, featuring Mae West, and The Little Giant, starring Edward G. Robinson. Vaudeville shows and stage acts, popular for that time period, were frequently held at the theatre.

The Hermosa Beach Review described the Metropolitan’s ornate design as “jazzed plaster decorated in various colors … a beautiful entrance under a marquee of rare artistic design.” Theatre patrons were surrounded by expensive wall hangings and pricey paintings, and sat on sofas and leather opera chairs while enjoying listening to the Robert Morgan pipe organ.

Brenda Bibee, former Hermosa Beach resident, recalled going to the theatre in the late 1940s with her older siblings. “For 20 cents, we could see a newsreel, a cartoon, and two shows,” she said. Later, in the mid-50s, Ms. Bibee worked at the theatre’s box office and helped people to their seats. “It was a beautiful theatre with red velvet curtains,” she said. “There was nothing else like it. And on Saturdays, there were special shows for the kids with prizes. The kids had so much fun on the weekends.”

From 1979 to approximately 1981, the theatre was known as The Cove, and showed popular surf movies as well as numerous screenings of the Rocky Horror Picture Show. There were also the occasional punk rock band performances, a huge hit with the emerging local punk rock crowd.

The name changed again to the Bijou, and it became known for eclectic film screenings consisting of foreign films, art pictures, and other lesser known releases – movies that were otherwise impossible to see in the South Bay. The Bijou may also be remembered for how easy it was to smuggle in a taco-burrito from Diana’s Taco Burritos at the end of Pier Avenue, also now gone. Rumor has it that some former Bijou patrons regularly smuggled in alcohol to enjoy during their movie viewing, although this cannot be confirmed.

The elegant Art Deco building was almost demolished due to the need for retrofitting to meet the state’s earthquake requirements. Discussions were held to level the building and replace it with a parking structure. The Hermosa Beach Historical Society swung into action, and the building was eventually designated a historical landmark in 1999. Retrofitting was completed, and refurbishing began on the exterior. The detailed façade has been preserved, and the interior space is now used for commercial/retail purposes.

Two red, worn, leather seats remain on display at the Hermosa Beach Historical Museum, along with other theatre memorabilia such as posters and handbills of the various shows from years gone by. Old theatre photos from a bygone era are displayed, and if you close your eyes, you can almost hear the melodies of the pipe organ and the applause of an appreciative audience.

Explore Story
Seven days a week, Australian-born siblings Curtis and Luke Stone throw open the doors of their European-style butcher shop at 10 a.m. and begin offering a selection of premium meats.
1
0
0
Explore Story
The 1933 Group extends its penchant for making what once was old new again to the Highland Park…
0
0
0
Explore Story
While L.A.’s food truck movement is expansive, having grown beyond hipster cuisine, Prince Emanuele Filiberto took the opportunity to flavor it with regional recipes from his homeland.
0
0
0
Explore Story
Come Homie Dine and shop at Manhattan Beach’s Favorite New Quirky-cool Downtown Café Homie Manhattan Beach has become…
0
0
1