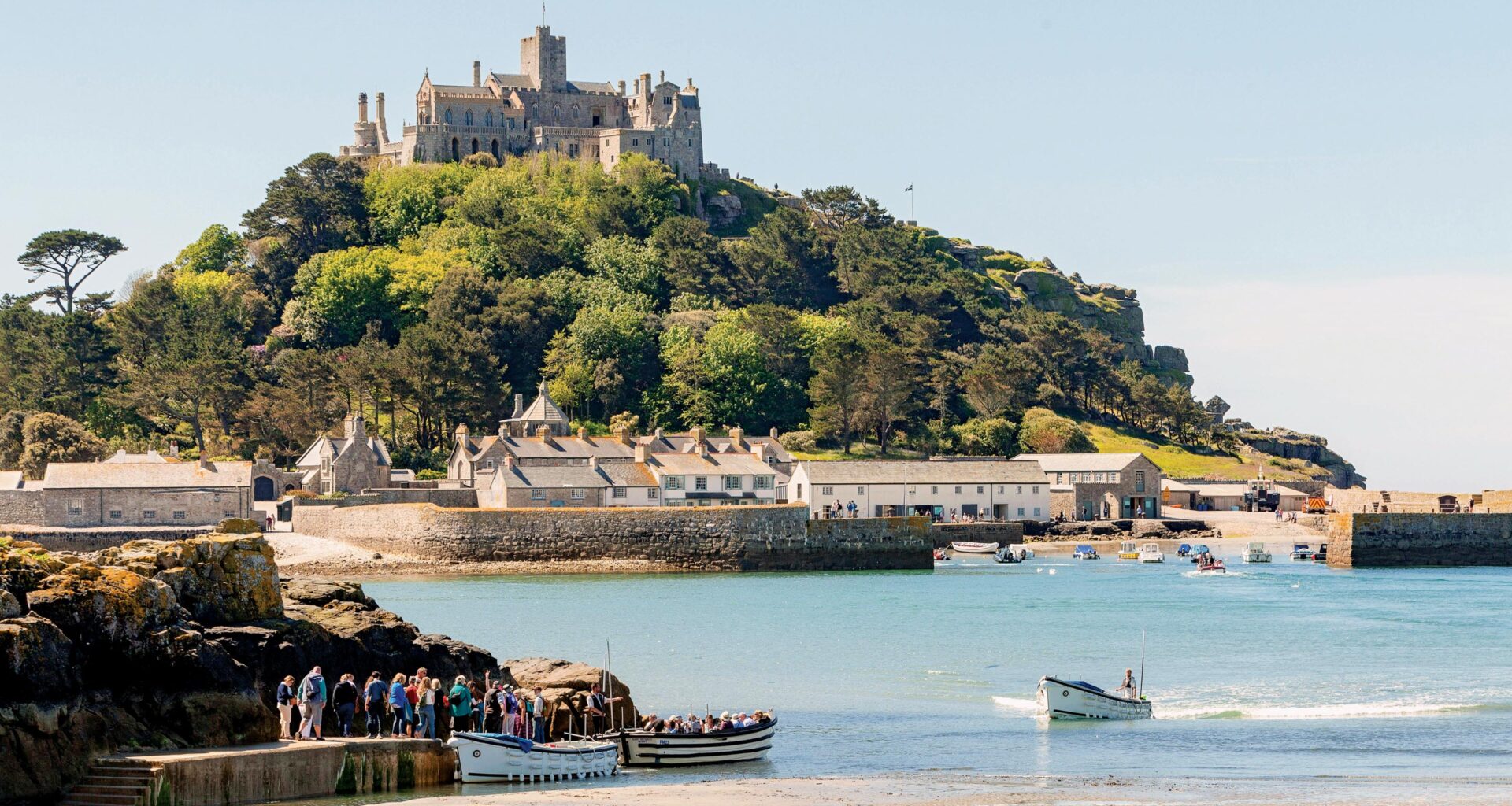 St. Michael’s Mount, a tidal island in Mount’s Bay, Cornwall, England, is a centuries-old citadel of history and lore, with strong ties to both.
Total
0
Shares
0
0
0

Perched on a Granite Crag, the Medieval Constructions of St. Michael’s Mount Were Built for the Ages

In the former camp is the island’s medieval, Gothic-facaded architecture, and in the latter, legend—sagas that told of seafarers lured onto the rocks by mermaids or guided to safety by an apparition of St. Michael.

These tales, along with four miracles said to have happened here between 1262 and 1263, have only added to the island’s religious magnetism, drawing pilgrims, monks, and people of faith here from its earliest days.

The island now welcomes some 350,000 visitors annually in a faintly mystical fashion. At low tide, a long cobblestoned causeway connecting mainland Marazion to St. Michael’s Mount reveals itself in full, only to slip back under the sea at high tide, to once more swim with the sirens.

Whether arriving at the island by land or by sea, one can hardly picture lovelier shores. At the base of St. Michael’s Mount is a charming harbor village with cottages for 30 working islanders, a café, and shops.

On high is its magnificent edifice: a Benedictine-built monastery turned castle and a 14th-century church. Today this stronghold of ancient history makes up the seat of the St. Aubyn family, including the castle’s current residents and 12th generation St. Aubyns, the fifth Lord and Lady St. Levan.

If it all reads like a PBS Masterpiece production, the age-old paths, rambling gardens, and all that stone is not likely to dissuade anyone from that perception. The island and its ramparts make for an extraordinary set piece (quite literally in the case of HBO’s House of the Dragon, which casted the whole historical pile for the show’s fictional setting Driftmark).

A medieval construction can, after all, be counted on to stir even the most jaded imagination, particularly in a digital age where the competition for attention is especially avaricious. A castle is as solid and steadfast as it is spectacular and the same is true of the one at St. Michael’s Mount, which has witnessed and withstood—among other tentpoles of medieval history—the Norman Conquest, the Wars of the Roses, and an advancing Spanish Armanda.

“Whilst the island has changed, these changes have been slow over the centuries and remain a constant and important landmark in an ever-changing world,” explains Steven Michell of St. Michael’s Mount.

One of the main changes concerns the castle itself, whose last major addition—its East Wing—came in the 1880s, introducing Victorian apartments, fine plaster relief and Chippendale furnishings.

“Wander through centuries-old corridors and unpeel layers of history, with shades of the past to be found in each room and new discoveries about the Mount’s history waiting around every corner,” says Mitchell, describing the experience.

One such discovery is the stately Chevy Chase room, which was created sometime between the late 16th and mid-17th centuries and whose name, which is familiar to Americans as the actor, in fact, references a medieval ballad and hunting scenes in the plaster frieze. Other touchstones of ancient times at the site range from a rococo drawing room to an armory and gun batteries.

The church, meanwhile, is sacred to the spiritually vigorous St. Michael’s Mount. Witness to untold pilgrimages over the years, it was built in the late 14th century with stones from a predecessor erected in 1135.

Inside is a 1786 organ that Colonel John Lemon—an insomniac with a penchant for playing the instrument while others were sleeping—sold to John St. Aubyn at the urging of his complaining neighbors; a 15th century Cornish stone lantern cross; a bronze of St. Michael, and a trio of Nottingham-made alabaster panels, also from the 15th century.

The grounds are equally glorious. Beautiful and fragile, they were designed in 1878 for Sir John St. Aubyn and his family of 11 (following an initial walled garden created in the 1780s). From aloe and agave to rosemary, lavender and Lampranthus tumbling down terraces, the landscape appears rendered by an Impressionist’s brush.

Stroll among the steep, sloping terraces and find plants that are impossible to grow anywhere else in the UK thriving in this “curiously mild microclimate,” describes Steven Michell.

“Despite the gales and salty winds that you’d expect here, frosts are a rarity and the rock acts as a gigantic radiator—absorbing the heat by day and releasing it at night.”

Those who ascend the steep walk to the island’s summit are also rewarded with incredible views across Mount’s Bay to the mainland and out to sea from the castle battlements and terraces. That’s to say nothing of the view into the past, which is as compelling as it is unavoidable. Here the past is always present—no matter what rolls in with the ride.

“Whether it’s religious beliefs, spiritual energies, or simply the opportunity to take a breath and reflect, people of all sorts are drawn to pause and become immersed in the uplifting atmosphere of the Mount and its unique location and historic architecture,” says Steven Michell.

Explore Story
Overlooking the hypnotic depths of the Adriatic, the remnants of an ancient time speak to an ancient place. This is Lopud 1483, a 15th-century Franciscan monastery complex, with its church, Our Lady of the Cave, so named for the fact that the friary was built over a sea cave that was later transformed into an underground passage connecting it with the open ocean.
0
0
0
Explore Story
KAA Design rethinks a mainstay of local outdoor living for a contemporarily conceived oceanfront abode on The Strand…
0
0
0
Explore Story
There’s always an element of risk in experimenting with fanciful combinations or fusing together different or unlikely styles. When it works, though, the payoff is something singular, new and novel. Such is the case with a new family home that has risen on Monument Street, along the hill and just north of Palisades Village.
0
0
1
Explore Story
Table of Contents Metallic accents in silver, gold, brass and copper exude a refined look and perfectly combine…
0
0
0