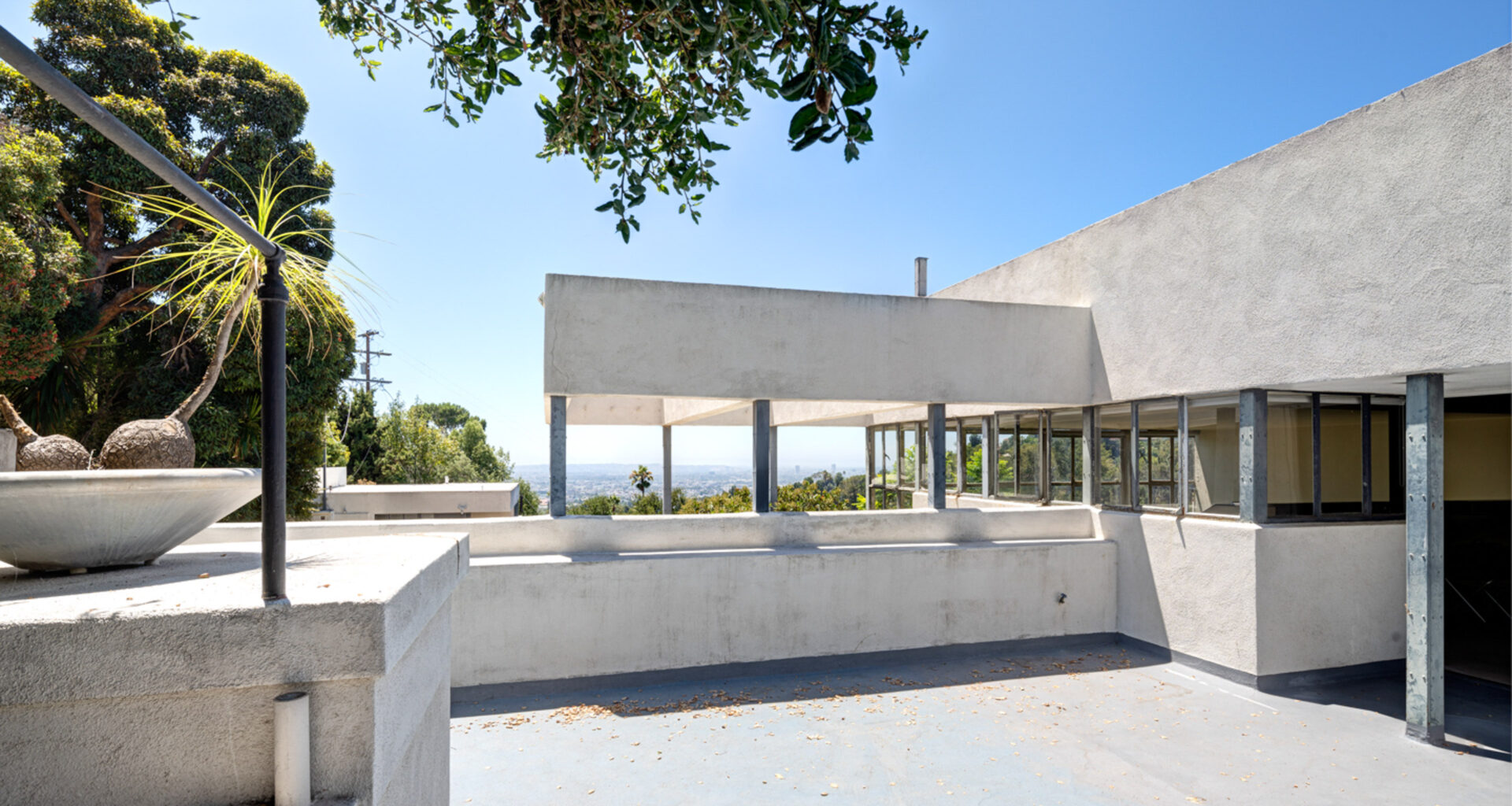 Dr. Philip Lovell’s weekly column in the Los Angeles Times had this byline: “One-third of what we eat supports us; the other two-thirds supports the doctors and undertakers.” It was the 1920s, and this well-known naturopath was a vocal proponent of clean eating and nature cures, such as outdoor sleeping and nude sunbathing. Lovell’s advice was holistic, extending to how the design of one’s home could have a positive impact on their health.

So when he and his wife Leah sought an architect for their Los Feliz home—someone who would understand and to put into practice their principles regarding home and health—they commissioned Richard Neutra, still a little-known architect who had transplanted from Vienna to Los Angeles.

When completed in 1929, Lovell Health House was the first steel-framed residence in the nation—and much more. Richard Neutra had understood Lovell perfectly, down to the home’s outdoor sleeping balconies and fresh-air swimming pool, neatly wrapped for privacy. That, and the home’s bounty of glass, expertly composed for streaming in the sunshine and panoramic views afforded on this high hillside.

Even the kitchen was designed for health, with a water filter—new for its time—and a countertop system to readily dispose of fruit and vegetable scraps. The home created a sensation, putting Richard Neutra on the map as an architect and meriting inclusion in the Museum of Modern Art’s famed 1932 catalog, “Modern Architecture: International Exhibition”—a hyper-exclusive happening that included the likes of Le Corbusier and Mies van der Rohe.

Lovell Health House, approximately 4,800 square feet and with five bedrooms, still stands as a prototype of firsts in design, and one of the most important residential designs in America.

“This was a groundbreaking interpretation of Internationalism for California,” says Crosby Doe, who specializes in the sale and marketing of historic and modern architecture and is representing the home. “And it still works today in the same way. It’s intimate, you can have a family there. But it can also serve for great social functions; the way it flows indoors and outdoors, and with grand, open interiors in the living room, dining room and den. The home lives large.”

Thankfully, the residence is still intact, down to the kindergarten classroom located under the garage that Leah Lovell ran, and whose alumni included her three sons and the grandson of Harry Chandler. Since 1960, the home has been owned by Betty and Morton Topper. With the passing of Morton many years ago and more recently Betty, the home is currently being sold by the Topper siblings. Like their parents, they have remained ardent stewards of the home, permitting no changes to Richard Neutra’s design.

“The family is quite unique,” says Doe, who credits Mrs. Topper in particular. “She understood the importance of this house, and over the years the family left it exactly as they found it.”

Doe became aware of the Lovell Health House in the early 1970s, not long after representing the Loring House (also by Richard Neutra), and he got to know the Topper family. The long-term relationship has lasted decades and came into play when the family decided to list the home.

“The family contacted me and I’m very honored to be representing this house,” says Doe.

Though Richard Neutras original design remains intact, the house is in need of restoration. “It would be well worth it for the aficionado who wishes to take this on,” Doe says of the restoration of Lovell Health House. With the residence fully restored, the architectural specialist points out, its value could surpass that of Kaufmann Desert House, also by Neutra.

One who looks at Lovell Health House today will find its clean geometry and abundance of windows familiar elements. But in 1929 this home was a revelation, as unusual as a spaceship poised on a Los Feliz hillside. That a home’s design could positively impact our physical and emotional health, then causing a shift in everything else in our lives, from creativity to relationships, was a largely unexplored concept.

“Phillip Lovell, as did Richard Neutra, believed in the positive effects of light and air and space and exercise,” Doe declares. “Everything that we’re talking about today is what they celebrated in that time.”

Recent research bears this out, that better environments equal better lives. But at its time Lovell Health House was a mere master study of this idea—brilliantly executed—that would prove visionary. Today it remains as effective in shaping life as it was nearly 100 years ago for the Lovells, rightly qualifying it as one of the most historically significant modern homes in this country.

Explore Story
Few landmarks are as rich in history as Los Angeles Athletic Club, the city’s first private club with roots in the Gilded Age. Among its offerings are a boutique hotel, a spa and eat-and-drink concepts that include the Blue Room.
0
0
0
Explore Story
In a secluded cul-de-sac in one of Encino’s most coveted neighborhoods is this contemporary masterpiece showcasing indoor/outdoor environs with jetliner views…“Massive” is the operative word when it comes to this renovated and remodeled beauty now on the market on one of El Segundo’s most sought-after streets.
0
0
0
Explore Story
The historic mansions of architecturally diverse Newport express the spirit and ambition of an age One thinks of…
0
0
0
Explore Story
Southern California is not a place short on world-class properties. However, one can be forgiven for thinking we are perhaps a bit shortchanged after glancing at this epic Neal Norman Hawaiian estate on the North Shore of Kauai, on what is perhaps the most beautiful oceanfront in the Pacific—Secret Beach.
5
0
2