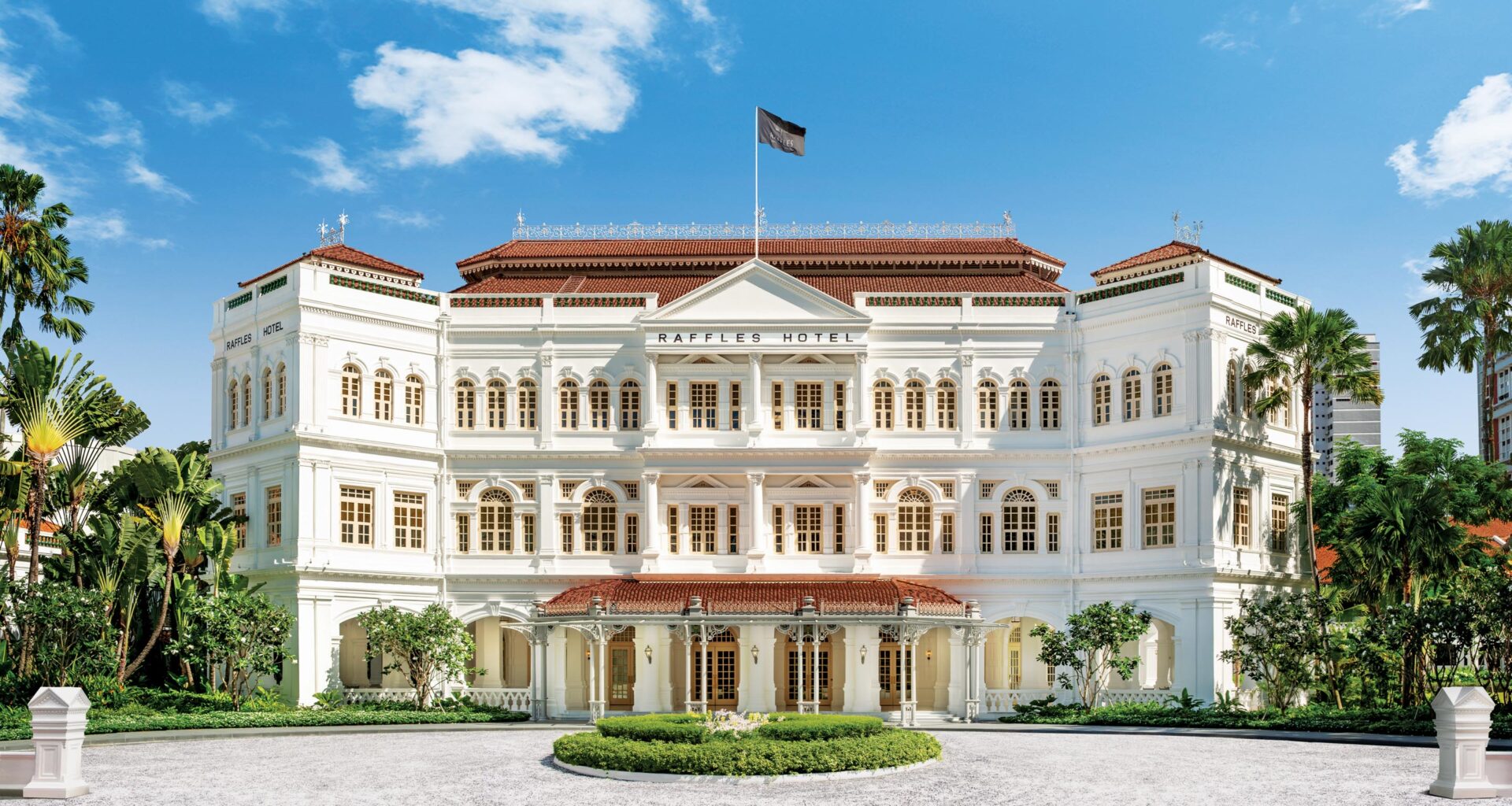 With the world increasingly reopening its doors, one property is making a grander entrance than most—Raffles Singapore. As it would, naturally, given the 19th-century heritage hotel’s rich history, its luminary-filled guest list, its verdant views, and its mannered, immersive ways.
Total
0
Shares
0
0
0

Pushing on From Pandemic, the Painstakingly Restored Raffles Singapore Reasserts Itself as the Premier Address in Southeast Asia

The property’s stature in its vibrant island nation is positively beyond reproach, and just as elevated as the white-glove service and experience that draws dignitaries and discriminating travelers alike. Our recent pause excluded, this was always true. And yet, the flagship property within the augmented Accor hospitality group has managed to outdo even itself, emerging from its chrysalis a post-pandemic butterfly, still observing health protocols but cautiously spreading its wings to showcase the glittering results of a three-phase restoration completed in 2019.

This was not the first refresh for the baronial hotel, which was built in 1887 and, exactly one century later, designated a National Monument by the Singapore Government. Two years after that ceremonious distinction was granted in 1987, Raffles underwent another refurbishment conducted over two-plus years. Not one to rest on its laurels, the hotel’s latest overhaul was headed by leading figures in the world of international architecture and design and preserved its architecture inside and out while expanding its accommodations.

“Raffles Singapore is one of the few remaining great 19th century hotels in the world and its restoration has been carefully designed to preserve its unique historic charm while creating extraordinary experiences for our esteemed guests,” notes Manager Christian Westbeld, the hotel’s general manager.

Given this good and gracious buffing, today the national treasure of a hotel with an international profile is poised to enter a glorious new era. There is, predictably, plenty of glory to go around. Raffles is a haven of opulence and escape; not in an exaggerated sense, but in a way that evokes a PBS Masterpiece drama, presenting itself as a product of another, more entrancing era, with its abundance of quality and character manifesting in liveried doormen, a lustrous grand lobby, polished teak verandas, lush tropical gardens, and glacier-white marble colonnades. It’s all faintly novelistic. Now, as the next chapter begins for the fabled hotel, one hopes it will never end.

Acclaimed interior designer, Alexandra Champalimaud, supported by global architecture and design firm Aedas, helmed the restoration, and together they achieved a kind of aria in physical form—harmonious, if slightly operatic in scope. While the effort to conserve the architecture is not keenly observed, the result absolutely is; everywhere one looks is a dazzlement (gaze out and the gardens delight, look up and the lighting mesmerizes).

Champalimaud, an enthusiastic internationalist whose coveted design atelier has completed hotels throughout the world (including the Beverly Hills Hotel Bungalows), was especially active, treating the interiors to her poetic and highly attuned cultural vocabulary meant to provoke an emotional aesthetic experience throughout.

Reimagined social spaces and exquisite new suite categories are among enhancements of the overhaul. To be fair, even pre-restoration Raffles was alluring, including its existing suites—each a spacious, elegant, and warm sanctuary with a residential vibe and every nicety imaginable. The same is true of its newcomers: Residence, Promenade, and Studio Suites, which are, true to form, colonial in tone, contemporary in spirit, and in subtle ways, aesthetically pluralistic.

The Presidential Suites are still the grandest at the grand-dame hotel. Vast at just under 2,800 square feet and overlooking the soothing Palm Court and posh porte-cochere, these suites are fit for a statesman, exhaustively ornamented with art and antiques and featuring, among other extravagances, private verandas, walk-in wardrobes, and personal pantries.

A long absence calls on a welcome return, and so it is for the revitalized Raffles—and a gleaming one at that. Better to backdrop the classy grounds and tantalizing dining concepts and bars, where one can request a world-famous Singapore Sling cocktail, or indulge upscale retail at the Raffles Arcade (the hotel’s answer to Rodeo Drive).

The result is a property not only beautifully reborn but in full possession of a cultural cachet reserved for top hotels in destination cities where one mirrors the other. Put simply, what the Ritz Paris is to the City of Light, Raffles is to Singapore. It is a credit to the restoration team that they managed to actually raise the hotel to a beguiling new level of connoisseurship while deftly maintaining and amplifying its strong sense of place.

And what a place. What a world! After quarantines and lockdowns worldwide, a little luxury (or a lot, in this case) is the declaration of a new day. Blessedly, Raffles does not hold back. There is no insinuation of extravagance here. It is an assurance. But always and immediately tasteful, and almost wondrously of another time.

Only, the time is now. So as conditions allow, Raffles is well worth jetting to the other side of the world to experience. Should there be any reservation, let it be the one you make.

Explore Story
In painstakingly documenting, disassembling and then reconstructing a century-old Pennsylvania barn on Alabama soil for a client whose…
0
0
0
Explore Story
Homes with A-list pet spaces and amenities earn market pedigree Written by Jenn Thornton Local homeowners are showing keen…
0
0
0
Explore Story
Set amid the famed Hollywood Hills, 1814 N. Doheny Drive is an ultra-sexy contemporary residence crafted by L.A. architect Paul McClean, offers expansive living space side by side with amenities that characterize the ultimate in luxury and relaxation.
0
0
0
Explore Story
Prepare to venture out on a “Summer Roadtrip” of the city’s diverse neighborhoods and eclectic cuisines July 14-28 via Summer dineL.A., complete with an official Roadtrip Guide designed by Emmy award-winning artist Gary Baseman.
0
0
0