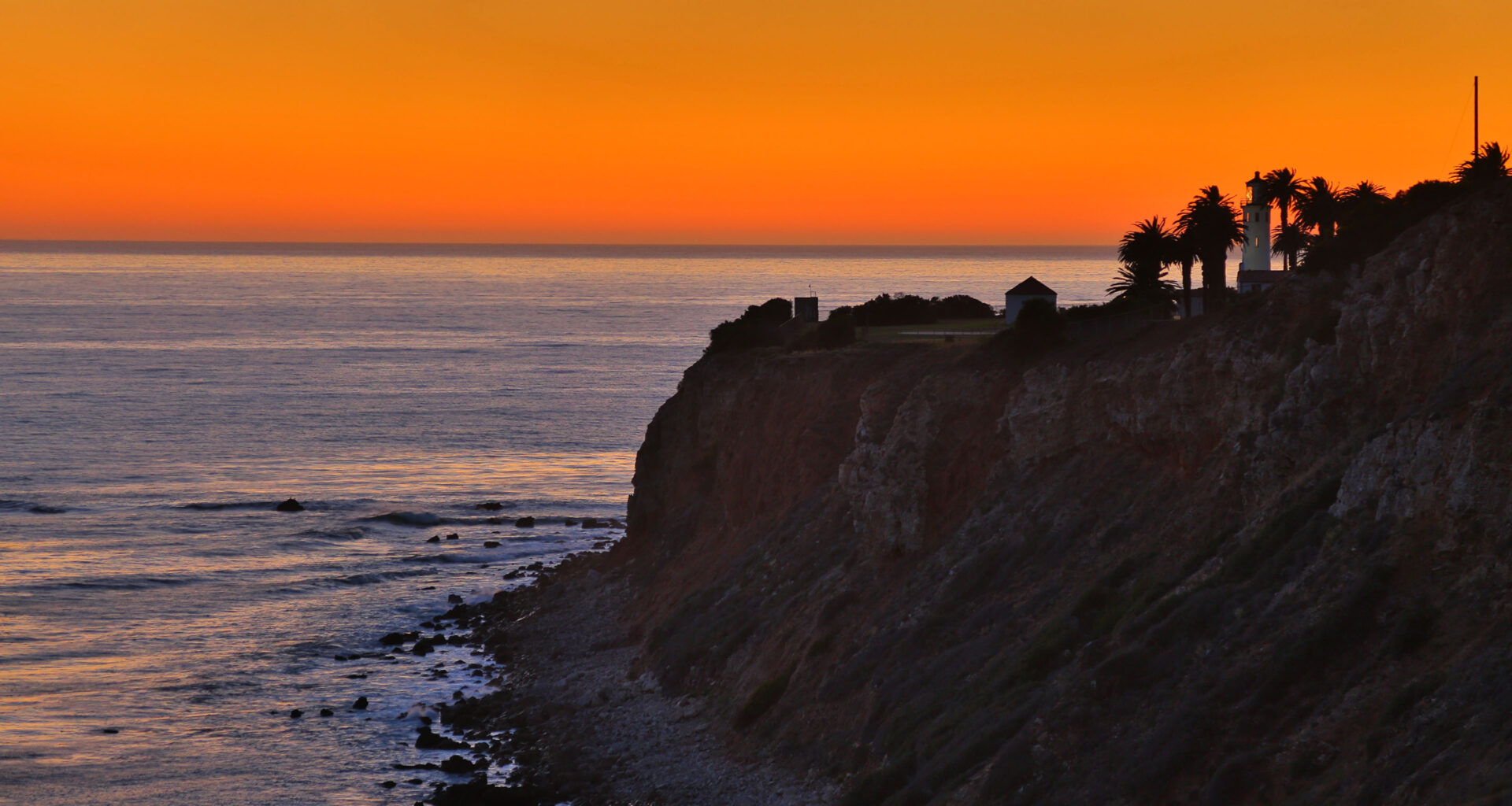 Before lighthouses were installed along the Pacific Coast, shipmasters took their chances near the coastline, particularly loathing the dangerous stretch of coastal waters along the Palos Verdes Peninsula.
Total
0
Shares
0
0
0

On May 1, 1926, the U.S. Lighthouse Service began operating what was considered “the brightest beacon” in Southern California: the Point Vicente Lighthouse, a cylindrical-style lighthouse. Still in operation as a navigational aid, the 67-foot tall lighthouse marks the northern end of the Catalina Channel on the Pacific Coast, and helps warn mariners of the rocky coast.

The lighthouse was built on plastered, reinforced concrete, and is similar to the one on Anacapa Island in the Channel Islands. Using a 1,000-watt bulb which is focused through a five-foot lens, the lighthouse’s beam is visible over twenty miles. This particular lens was hand-ground by Paris craftsmen in 1886, and was in service in Alaska for forty years prior to installation in the Point Vicente Lighthouse. In the early days, the Keeper, Assistant Keeper, and their families lived in nearby cottages, which are still standing nearby.

In 1934, the radio station and the radio navigation beacon were added. For many years, Coast Guard radiomen at Point Vicente monitored the international distress frequencies, ready to help vessels in need. However, the last radioman locked the doors in 1980 when this responsibility was transferred to another station. The radio station buildings of that station are still here although the old equipment is long outdated.

During World War Two, the 1000-watt bulb was replaced by a tiny 25-watt bulb, significantly dimming the light source so as not to aid in enemy navigation. After the war, the bright rotating beam became a glaring disturbance to local residents and a hazard to nearby motorists. Lighthouse keepers coated the inside of the inland-facing windows with a coat of white paint to end the flash of the beacon on nearby residents’ homes.

Today, the lighthouse keeper has been replaced by electronic sensors and automated controls. The nearby housing facility is home to Coast Guard personnel assigned to nearby ships, stations and offices. The former radio center is now manned by volunteer civilian members of the Coast Guard Auxiliary who track distress calls from boaters in the Catalina Channel.

The Lady of the Light

Through the decades, there have been reports of ghost sightings at the lighthouse. Legend has it that a tall, forlorn-looking woman in a flowing gown slowly paces the tower’s walkway. Some believe the “Lady of the Light” is the ghost of the first lighthouse keeper’s wife who fell from the edge of a cliff one foggy night. Others believe she waits for the return of a lover lost at sea. Yet another story is that she is the shadow of a heartbroken woman who threw herself from the cliffs when she found herself abandoned by her intended. Explanations that this “phantom” is caused by reflections from the huge lighthouse lens haven’t discouraged those who believe the Lady walks here on a nightly basis.

The Lighthouse is located at 31550 Palos Verdes Drive West in Rancho Palos Verdes. The grounds and lighthouse are normally closed to the public.  However, the tower and a small museum are open to the public from 10:00 A.M. to 3:00 P.M. the second Saturday of every month. Admission is free. In March, the tower and museum are open the first Saturday of the month from 10:00 A.M. to 4:00 P.M. to coincide with the City’s popular “Whale of a Day” event.  Children under 7 are not allowed in the tower and pets are not allowed on the Coast Guard grounds. For recorded information, please call (310) 541-0334.