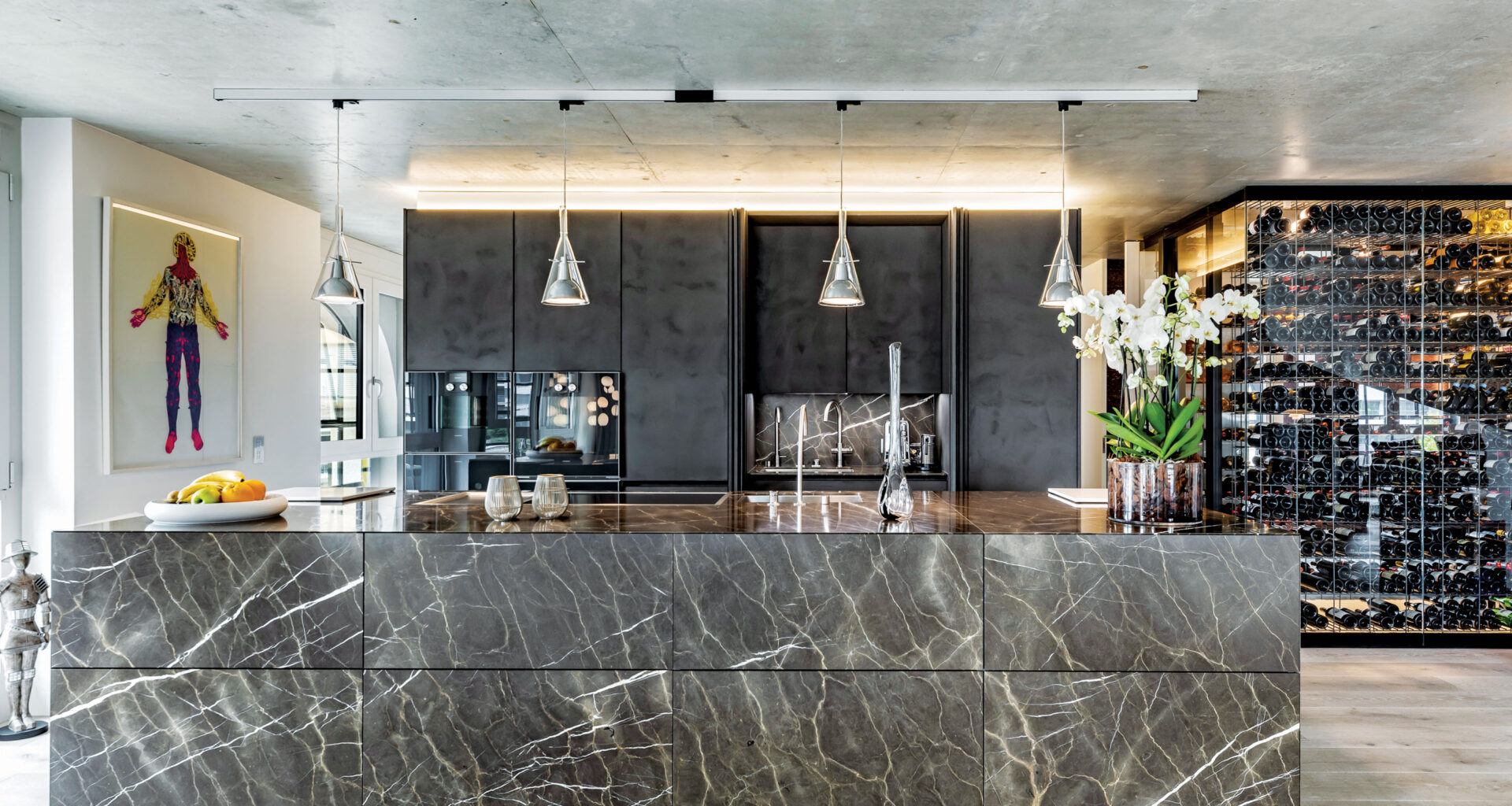 In the Historical Town of Vevey, Switzerland, Montalba Architects Devised a Set-piece Solution—with a Twist—for a Modern, Three-story Loft

Montalba Architects, headed by David Montalba, FAIA (Founding principal), with offices in Los Angeles and Lausanne, Switzerland, and Nuno Ravara (Principal, Lausanne), is on an upward spiral. Its Riviera Loft, which saw the firm transform a historical, exposed, three-story space into multi-family residences, with a special focus on the penthouse, is a monumental case in point, with its centrally-situated staircase exerting dominance in the space, serving the practical purpose of allying its three floors and the more aesthetic intent of stopping one cold. Its absolute supremacy in the space supports the juxtaposition of old and new to form something entirely, even radically, unique.

Ensconced inside a 19th-century shell, “The loft’s program was split by levels, in addition to two concepts that we worked on throughout the project development, the first being the desire to keep the existing open feel of the space,” explain the architects, noting that achieving this meant enclosing different programmatic elements within separate independent structures while leaving the “in-between space” as the non-programmatic area for the family.

“The second,” they note, “was the introduction of a circular staircase that perforates all levels, thus linking their programs, as well as generating new visual connections between the different floors.”

Such calculations resulted in an architecturally assertive, sharp-looking, and highly serviceable space that draws its dynamic vibe not only from its staircase but other eye-popping elements, such as a spectacular glass-walled room for wine storage that evokes the industrial bones of the broader building.

“The asymmetry between the modern, comfortable living spaces to the historical infrastructure and exterior façade create a story of the clients’ longstanding connection to the city and its evolution,” the duo offers.

“Inside, new floor slabs and natural materials complement the existing brick façade and concrete slabs, giving equal importance to the existing materials as well as to the new ones.”

The architects were sufficiently bewitched by the space’s possibilities from the start.

“The existing industrial structure space was very powerful with its regional baroque design, rich with texture and history,” they say.

“The result is a space that does not negate its origins but rather enhances its historical power through working with precise actions and restoration practices. The design finds original ways of sculpting the natural light, which comes in through the existing arched industrial windows, and complementing it with a material palette that brings warmth to the different spaces.”

Warmth is needed in a project of this scale. The space is an ambitious 5,150 square feet, as is its scope, which called on the architects to maintain the historical character and texture of the space while revising it for contemporary living and the needs of a growing family. Realizing this duality meant a program aimed at retaining exterior walls and fostering a lightness within the interior.

“Solid walls were softened with rounded corners, and wherever possible, transparent glass was used to embrace natural light and open the space,” note the architects.

They point to the palette of light oak wood, smoked glass, and black marble that was selected to create a minimal backdrop for a curated set of furniture and art collection throughout. What’s more, each level was designed to serve a specific purpose: the first floor for living spaces, the second floor for children’s rooms and common space, and the third floor for primary bedrooms and bathrooms.

The middle level is, ironically, topmost in the overall design, as all eyes train immediately on the cyclone of the staircase that commands the space, yet does not—all credit to the architects’ acuity—swallow it.

“The concept idea for the staircase came from the exhibition ‘Gordon Matta-Clark: Anarchitect,’ which focused on this idea of perforation and new views within existing building structures,” the architects reveal.

“The staircase not only fulfills a clear functional role…” but becomes “a center-stage piece within the project.”

Theater in the round, as it were. Although, this is not a form content to simply fade into the background or wade out politely from the wings. It is central to the visual vocabulary of the overall loft, its form reflecting the original circular window that lines the southern façade and infused with the insurrectionist spirit of its muse Matta-Clark. It’s confident, nonconformist, and a bit rogue. And you can’t take your eyes off it, or simply won’t.

Riviera Loft is, in the end, a physical manifestation of Montalba Architects’ ability to meet the moment. The practice is never better than when boldly challenged—or challenging conventional ideas with unconventional solutions. This is proud, poised, and audacious design. And, like the heft of its staircase, it speaks volumes about an architectural practice forever in ascension.

Explore Story
In her historic, high-desert home in New Mexico, artist Georgia O’Keeffe created a masterpiece Written by Jenn Thornton…
0
0
0
Explore Story
Posted high above the beach, with private access to sand and shore, the home at 27560 Pacific Coast Highway sits atop the world on an uncommonly large lot for its locale. Chris Cortazzo of Compass represents this unbelievable oceanfront estate with direct beach access. Private beach party anyone?
0
0
17
Explore Story
VS is to German design what architect Richard J. Neutra is to L.A.—fundamental to its identity. Ours is a city of Neutra’s elegant, clear-eyed modernism; those enormous glass walls, that startling seamlessness between indoor and outdoor space.
0
0
0
Explore Story
If not hyperaware of the elephant in the room—Frank Lloyd Wright and his architectural opus Fallingwater—the design team at internationally recognized architecture firm Bohlin Cywinski Jackson was aware nonetheless.
0
0
0