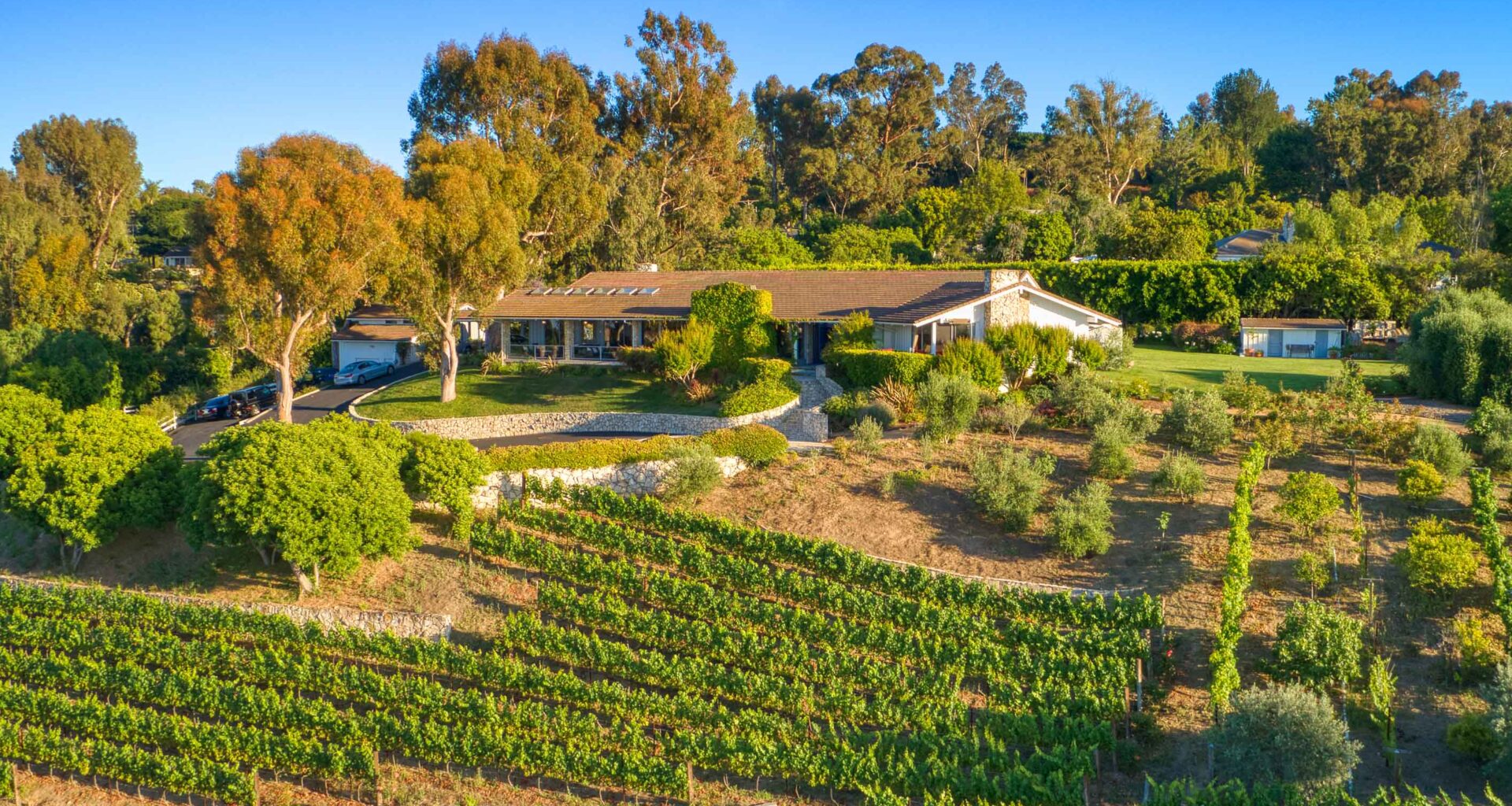 In the middle of last century, Ernest Hahn saw the future and it was shopping centers. The doors opened on his first project in 1965, and from then on, Ernest Hahn rode a cresting wave, designing shopping malls and retail centers in 18 states.
Total
0
Shares
0
0
0

When it came to building his personal residence in Rolling Hills, Ernest Hahn applied the same creativity and precision that made him a pioneer of the American public square.

His sprawling mid-century home, completed in 1970, still stands as a luxurious perch above the city and ocean. “Ernest Hahn picked the greatest lot and built one of the finest homes,” says real estate agent and architecture expert Gerard Bisignano.

Before one details its charms, it’s important to note that the residence sits on a seldom-heard-of expanse of land: 5 acres, spanning an agriculturist’s dream of mellow organic gardens and a fruit orchard that includes fig, apricot, peach and persimmon trees.

In addition, there’s a bounty of over 2,500 chardonnay and pinot noir vines planted in the mid-2000s that produce about 275 cases a year of excellent wines. There are olive oil trees, too, over 100 of them, diverse in their points of Mediterranean origin and yielding hundreds of liters of olive oil each year.

So fine are the fruits of this land that the wine is award-winning (the chardonnay has been rated 91 points by Wine Enthusiast; the pinot noir 93 points), and snapped up by local buyers, Terranea Resort among them, along with the olive oil and bounty of fruits and vegetables produced each year. The vineyards, et al., are courtesy of the home’s current owners, who originally hail from Greece and reworked the lands anew.

“There was no landscaping, there was absolutely nothing,” says homeowner Dimitri Bizoumis of the state of the property when he and wife Leah purchased it in 2000.

“To create something like this, it doesn’t matter how much money you have. It’s a lifetime process that we did in parts.”

These days, the land stands as a scene plucked from their Mediterranean childhoods, and they revel in the maturity of their planting, completed over the last two decades, which yields an Eden-like catalog of fruits and vegetables throughout the year.

“Everything will be ready for the next buyer,” points out Bizoumis.

The home’s architectural heritage has been sagely maintained, starting from its low-lying, angular exterior, decked mostly in glass and softened by a low-pitched roof and vertical white cladding. Stonework, consisting of gray and beige Palos Verdes stone, reinforces the terra firma atmosphere of the property and is used strategically to clad chimneys and beams on the exterior and interior, as well as to introduce the residence, appearing along the driveway and shaped into a sweeping staircase that leads to the front door.

An interesting feature—a dense stone wall that flows from the exterior entrance of the home and into its foyer—signals the home’s connection to the outdoors. “The house actually probably looks better today than when it was brand new,” remarks Bisignano, giving credit to the current homeowners’ for their careful upgrades and upkeep.

The introduction of the home’s interior is a sun-filled great room with, at its center, a sunken living room with a gently angled ceiling of exposed ridge beam and rafters, and tongue-and-groove roof planks painted soft blue. Walnut floors, softly gleaming and rich in character and color, lend a natural elegance to rooms where little ornamentation is needed so intense are the views. One is treated to a panorama of blue skies, verdant natural landscape and endless ocean, a view that’s forever thanks to the property’s high elevation.

“A mid-century modern in Rolling Hills is extremely rare,” says Bisignano, pointing out that homes located here are, nearly exclusively, traditional ranch or Mediterranean in style.

This residence, designed by Ernest Hahn and an architect who worked with him on commercial projects, was constructed to offer up the choicest views at strategic points inside and outside of the home, which spans 6,200 square feet and includes six bedrooms and six baths, along with an abundance of fresh-air spaces. Cherished privacy, too.

“I would drive by the property over the years before I bought it,” says Dimitri Bizoumis, who’s lived in the area since the late-1980s.

“As you drive by on the street you can see all the land, but not the house.”

The pool deck is one of many secluded escapes: a spacious area neatly landscaped with lavender and other plants, and flanked with mature, overhanging trees for shade. Framed with decorative stone, the swimming pool is home to a spacious built-in spa, and sports a Mediterranean touch in the form of three jets flowing water from the stone and into the water.

Adjacent to the pool is a roomy outdoor kitchen and dining area with a grand wood-burning oven as its centerpiece. In all, this space calls for sun-splashed, afternoon parties where more is the merrier.

Dimitri Bizoumis recounts the many fundraisers he and his wife have hosted over the years, “where we have 100, 150 people and the guests wander around the property.”

Then there’s the intimate gatherings, he points out, “where everybody goes out in the garden and picks their favorite vegetable or fruit, and we come back and cook all together.”

Another inspired spot is an alfresco viewing deck accessible from the great room via an oversized sliding glass panel. Step outside and it feels like one might be at a hilltop resort far away—especially at sunset, surveying the brilliant shift of colors across the ocean and sky. Or at night, when backlit by the glitter of city lights below, the blackness of the sky creates a stunning canvas.

“It’s an experience, it’s a lifestyle,” Bizoumis describes life at the top of the hill, likening the property to a piece of artwork, exceedingly rare, “like a beautiful Picasso, or Renoir or Matisse.”

He says: “You wake up in the morning, you see the surroundings, you have breakfast from your own fruit—and then you get inspired.”

Returning at the end of the day one can retreat into one’s private idyll.

“This house is truly one of the absolute best lots in the city of Rolling Hills, maybe in all of Palos Verdes,” says Gerard Bisignano, who himself grew up in the community.

“Not only for its spectacular views but for 5 acres of nearly all usable land.”

The current owners have christened the place Villa Oniero, which means “House of Dreams” and is a fitting descriptor for the ethereal maze of vineyards, gardens and grassy spreads, sunlit and situated on the hillside, with the Pacific Ocean not far away.

Nearby is the sophisticated, airy residence that Ernest Hahn, a master of creating pleasing spaces, meticulously fashioned many years ago for the maximum enjoyment of this majestic slice of Earth—a vision that’s been smartly carried on and expanded by its current owners, and is now ready for its next chapter.

Explore Story
Now owned by singer and entertainer Michael Feinstein and his husband, Terrence Flannery, it’s on the market for $12.75 million, complete with an underground tunnel for secret entrances and exits, sweeping city to ocean views and fabulous grounds showcased by formal gardens.
1
0
0
Explore Story
Names like Adam Hills and Maria Speake of Retrouvius, Chrissie Rucker of The White Company, and the Lawson-Fenning partnership between Glenn Lawson and Grant Fenning are setting the trends for modern luxury style today.
0
0
0
Explore Story
Modern practitioners of ethically-driven design are reshaping the future with sustainable solutions that meet the moment.
0
0
0
Explore Story
Noelle Park of Noelle Interiors located on Manhattan Avenue, since starting her design business in 2005, has been called on to bring her creative acumen to a slew of South Bay homes that range in style from wood-filled French Country and sleek Mid-Century Modern to crisp, colorful Beach Cottage and Plantation-style homes.
0
0
0