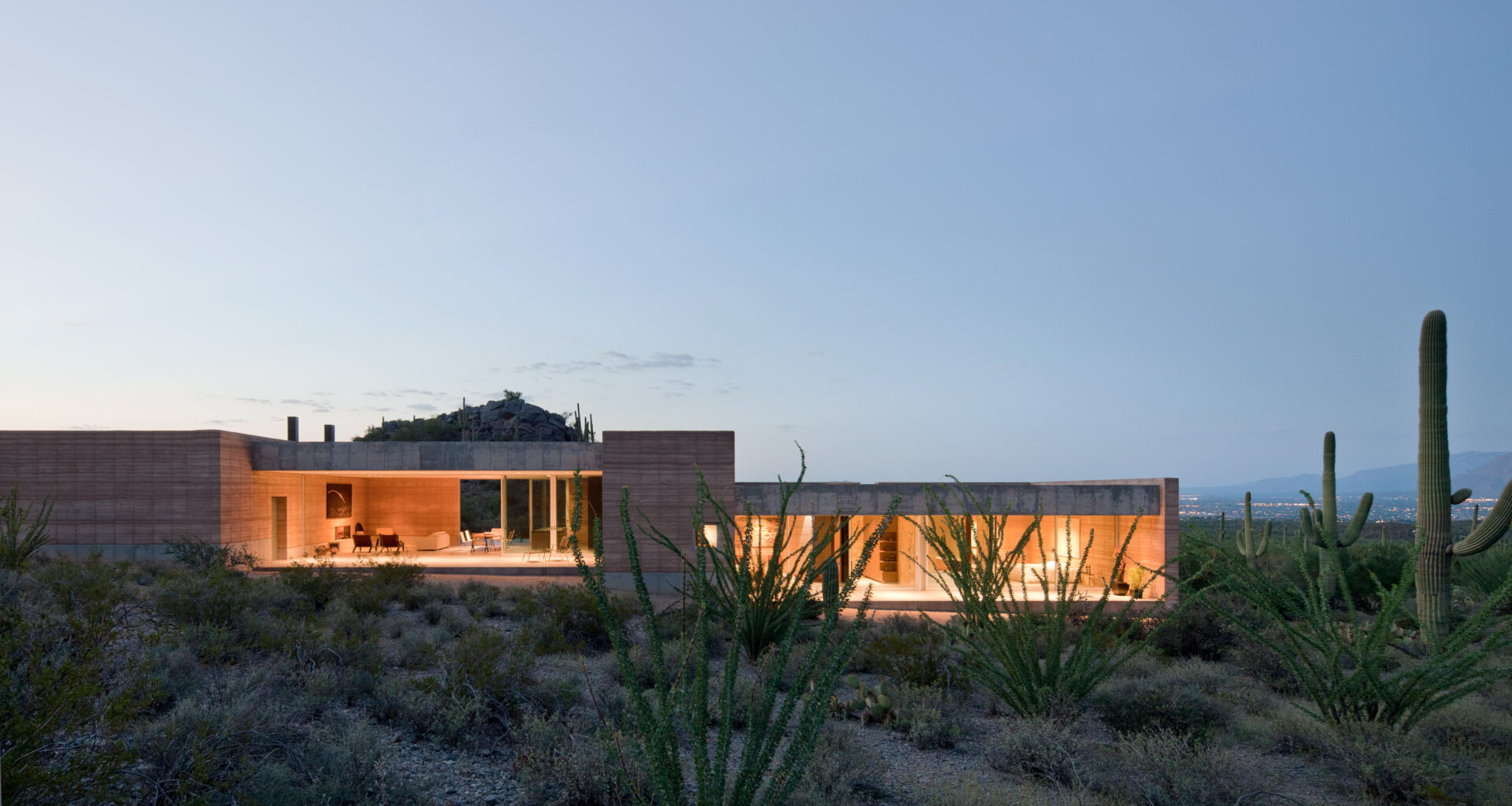 Cade Hayes and Jesus Robles, the principals of DUST, based in Tucson, Arizona created the Tucson Mountain Retreat that perfectly meshes with the natural backdrop of the Sonoran Desert.
Total
0
Shares
0
0
0

DUST Designs Tucson Mountain Retreat, a Sonata of Sky and Saguaro in the Sonoran Desert of Southern Arizona, to the Tempo of Its Terrain

The Sonoran Desert is a fascination—a natural environment that is, in its profusion of desert plants and flowerings, its rocky outcroppings and mountains, one of the most otherworldly places on Earth, at once thoroughly alive and totally still. There is an organic harmony here. And a house, designed by DUST, that captures it perfectly.

Permeated by the smells of Spanish cedar, and seizing on the shifting shades of natural light, Tucson Mountain Retreat is exactly that—a retreat, but also an immersion in the natural environment that informed its architecture by Cade Hayes and Jesus Robles, the principals of DUST, also based in Tucson, Arizona.

In the same way that one cannot separate good architecture from its surroundings, one should not see Cade Hayes and Jesus Robles as separate from their work. They strive for synchronicity and draw clues for their designs from the experiences of both site and life.

They struck just the right chord with Tucson Mountain Retreat. Its owners—one a talented classical guitarist by hobby; the couple’s daughter also is a musician—desired a home that would meet their needs. Namely for calm and relaxation, but also for music, to play and record it.

The whole house is wired for the impromptu jam session, “so that if one is in the bedroom, and has an epiphany, they can plug into the wall and record back to the main recording space in the music room,” notes Cade Hayes. With music important, the architecture is quiet. “We tried very hard to keep visual static elements to a minimum, looking for purity,” he adds.

“The site also forces clarity. The duo used outcroppings of rocks as the defining boundaries of the living space,” Cade Hayes explains. “If a home can become a backdrop to life, the experience of living, and living within the landscape, is the primary character of the home, and hopefully most of the time the architecture ceases to matter.”

It’s an interesting idea. Tucson Mountain Retreat is strongly contemporary and yet, situated and shaped by the land so that it would, as Cade Hayes describes, “transcend time, while being of the place.” With its masses rising up from the landscape, the house “feels like it belongs; as it was always there.”

A big reason for this is the materials. The architects examine this element, along with local references (how indigenous people build and the materials they use), at the start of every project. For Tucson Mountain Retreat this translated to using rammed earth for the main building, which helps amplify the structure’s sense of the perpetual. Charred Spanish cedar walls, meanwhile, complement the rammed earth while offering a correlation to desert drought.

“At night,” Cade Hayes explains, “these walls fade into the darkness and at times into infinity.” There is a 450-square-foot star-gazing deck, and a good deal of covered outdoor living space, for contemplating infinity too.

A cumulative 3,640 square feet and orientated to collect winter sun, prevailing breezes, and diurnal air movement up and down the mountains to the south, the house is as thoughtfully situated, with the living space at its heart, as it is crafted. Hardware and handles embrace certain elements of the architecture and finishes include Anne Sacks tile in white onyx and mother of pearl, stone countertops, and Fleetwood windows and doors. Other touches evoke nature.

“The spiral stair,” Cade Hayes notes, “takes clues from the shade beneath a mesquite tree, the skeleton of a cactus and the wing of a cicada, yet is none of these; but the play of light can spark a memory that is unique to users.”

Light is primary to the project, helping cultivate a feeling of warmth that is further amplified by 11-foot-high ceilings, thick walls, and striations of material. Along with the natural light, the architectural team worked with a lighting designer to illuminate a rotating art collection. DUST also designed custom furnishings and an aluminum skybox for the space.

To take the full measure of the house is to see its whole—and its holism. This is a space where living with nature is a living breathing reality. And make no mistake, the house breathes, embracing the light and land, and flora and fauna just beyond. When open, the atmosphere changes, and “it’s like a luxurious ramada in the desert,” describes Cade Hayes. Only lightyears nicer. “There is dignity to the spaces, the connection and ease to the landscape feeling integral,” he adds.

The main entry is particularly memorable, marked by a sequence of fractal concrete cubes that offer an open-ended path toward two separate entries. In time, the architect’s hope, vegetation will take over the steps and become the main experience.

The steps “were an intentional move to force one to slow down, focus, and forget about the static of life, a corporeal engagement into the home,” says Cade Hayes. “A mentally decompressive experience.”  Which is, of course, every desert-oasis ideal.

Explore Story
Located in one of the city’s most private canyons, this elegant abode boasts exquisite details and an incomparable…
0
0
0
Explore Story
A unique approach guided the design of this 13,000-square-foot oceanside property—with an infinity pool running along its central axis—that belongs to a couple from California.
0
0
1
Explore Story
“My first criteria, thinking about projects, starts with the client,” says Brooks Walker, principal at Walker Warner Architects. “I always say great clients get great projects.”
0
0
0
Explore Story
Dawnridge, a house with a slow, transcendent dimension to counterbalance the bustle of Silicon Valley, and utterly suspicious of ornament, is rewilded to the environment by Field Architecture.
0
0
0