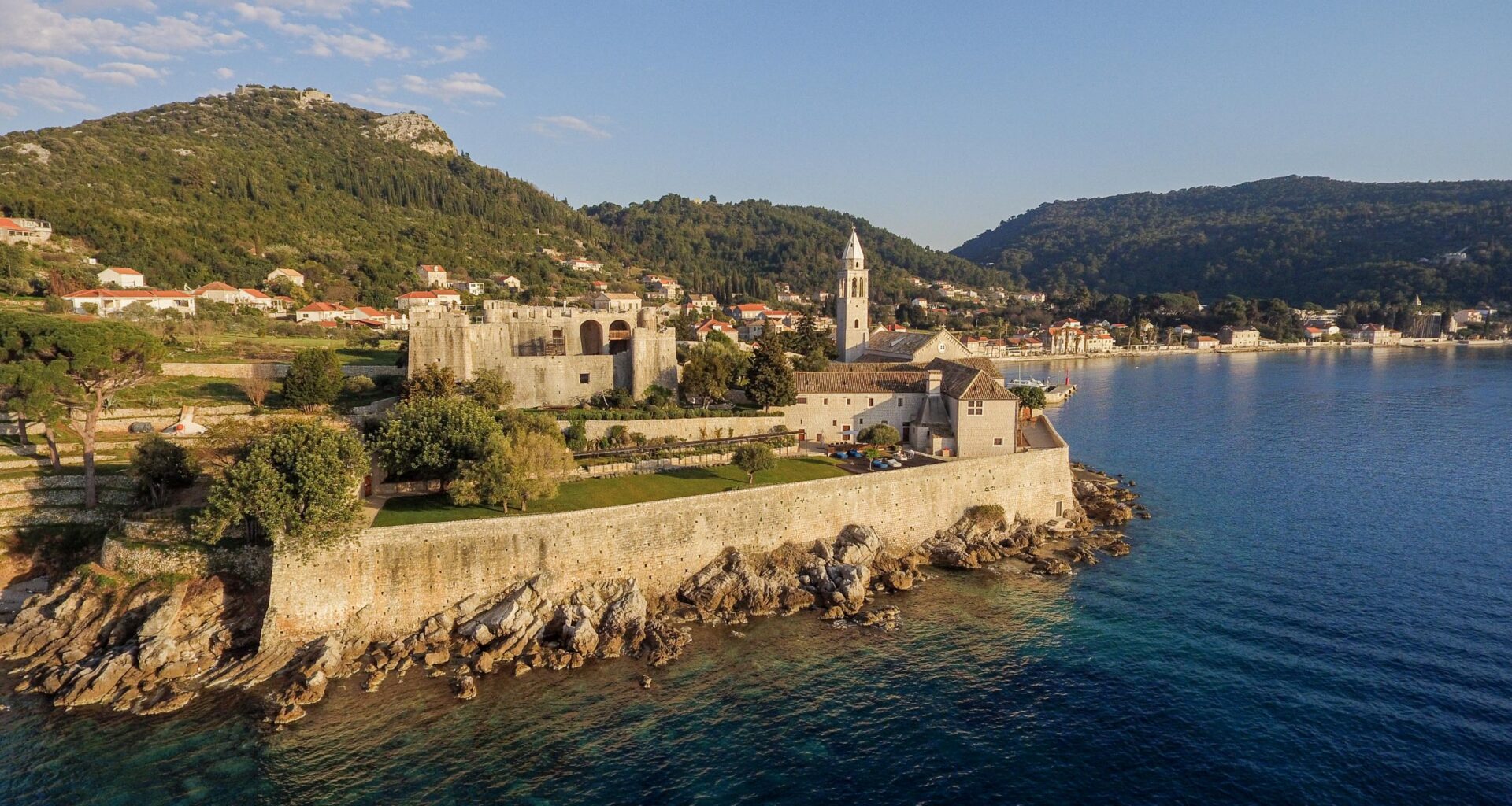 Overlooking the hypnotic depths of the Adriatic, the remnants of an ancient time speak to an ancient place. This is Lopud 1483, a 15th-century Franciscan monastery complex, with its church, Our Lady of the Cave, so named for the fact that the friary was built over a sea cave that was later transformed into an underground passage connecting it with the open ocean.
Total
0
Shares
0
0
0

On the Small Island of Lopud in Southern Croatia, Arhitektri’s Renovation of a 15th-century Monastery Built During the Age of Discovery Is a Sensitive Exploration of Sacred Space

Below, the sea is all one hears. Listen closer though, and this piece of history also tells of the more fraught end of the 16th century, when the Republic of Dubrovnik, under constant attacks from the sea during the Ottoman-Venetian wars, built fortifications along its coastline to provide safe harbor to local populations. The fortress here was among those constructions, making this complex one of both love and war.

Today it’s mostly love, courtesy of a highly sensitive restoration by Studio Arhitektri, an architectural practice in Zagreb, Croatia co-founded by Aleksandar Markovic and Rujana Bergam Markovic, who served as lead architect on the project—a modern spiritual retreat and a one-of-a-kind public venue.

Knowing the history of this place like the back of their hand allowed the architects to make the building 21st-century functional while sanctioning its original purpose as an old-world monastery and fortress.

A project with the historical importance of this magnitude was the first of its kind for the practice, and Rujana Bergam Markovic admits it being “both a gift and a burden.” A gift in the sense that it “makes you want to make great things,” she says, but at the same time “makes you feel humbled.”

In keeping with Arhitektri’s ethos to create unobtrusive and human-centered interventions, their charge was largely one of unification; finding a language that could communicate between the future and the past.

“In the beginning, the task seemed poetic and beautiful with so many layers to work with and learn from, but soon we realized it was intertwined with a plethora of technical issues,” says Rujana Bergam Markovic.

The aim “was to design and build the new parts as contemporary and not to invent or create replicas or to try to make something look old with the use of new materials.”

To do so would have been insincere. The approach, rather, was to be respectful of a building that had stood for so long while applying the knowledge, new techniques, technologies and materials of the current era. The result is that innovation is noticed but does not detract. Exhibition rooms are equipped with climate control, a conference room has state-of-the-art technologies, five suites offer heating and cooling, a ground floor was reconstructed and preserved as needed.

Rujana Bergam Markovic recalls the challenge of finding solutions to implement the latest technical systems into a centuries-old building without being visible or invasive akin to “solving the most intriguing labyrinth.” Yet one does not see this sleuthing. “I think the best compliment we received was that the new features feel like they have been here forever!” she says.

Heritage building constraints forbade reorganizing rooms via a new floor plan. “The layout of the ground floor of the monastery was quite fixed,” notes Rujana Bergam Markovic. “Luckily the Franciscan friars did have service rooms even back then, like spaces for food storage or the cattle, which we then used for our service rooms like kitchen or toilets. Most of the spaces are so beautiful that they simply needed to be shown.”

The rooms occupied by the friars—previously small and modest with one window and stone-carved window seats for prayer or contemplation—are expanded but still call for a kind of invocation. While steeped in sacred stone, the interior is fashionably modern courtesy of Arhitektri’s collaboration with Milan-based furniture brand Paola Lenti. Furnishings feature simple shapes and curves with bursts of vibrant color.

Spaces throughout the monastery feature historical Renaissance furniture and contemporary art pieces from the private Thyssen-Bornemisza Collection. Francesca Thyssen-Bornemisza, in fact, is creative director and benefactor of the project, and she worked closely with Arhitektri in the building’s preservation.

With her vision, Lopud 1483 is a center of culture and learning in the mold of the ideals of Saint Francis. A place adapted for events, retreats, and other symposia.

One finds a gentle hand in the exterior, as well. The garden, while aesthetically unimportant to the Franciscans, was renovated according to their principles, with plant species and their placement thoughtfully selected in accordance with the new function of the complex. One might assume Lopud 1483 sent from above were it not already “heaven on earth,” says Rujana Bergam Markovic.

“You can be in the sun or hide in the shade of century-old olive trees; you can find privacy in a secluded corner of the garden or enjoy company on the roof-top terrace of the fortress with views to the endless horizon and the neighboring islands. The sunsets are truly an amazing experience. When you look around you become aware of the uniqueness of the spaces and buildings around you. Your mind quickly floats away into some other distant times and wonder what amazing stories those walls could tell you.”

The scenario she just proposed sounds quite good.

Explore Story
Aside from the jaw-dropping ocean views and copious amenities, perhaps the most amazing thing about owning an exclusive Villa at the luxurious Terranea Resort in Rancho Palos Verdes is the turnkey experience.
0
0
0
Explore Story
For those seeking a timelessly designed home with a tranquil ambiance, the Spanish-Moroccan offering at 3008 Via Victoria is just the place. Dual pathways amid a sea of indigenous landscaping and a central, delightful fountain lead to the Spanish, almost Mission-style, home. In keeping with the classic tradition of beloved Palos Verdes design is the home’s big arched windows and terra cotta roof. Yet, hints of a Moroccan aesthetic—from intricately stained floor tiles to the star-patterned pendant light dangling above the front door—are quickly evident, making this home a true architectural beauty that seamlessly merges classic and contemporary styles to create a tasteful abode with an eternal air.
0
0
0
Explore Story
From painstaking attention to detail to captivating lake views to impressive amenities and more. Definitely a one-of-a-kind personal retreat, this castle-esque property also offers the ultimate in privacy, ideal for detaching from the rest of the world.
2
0
2
Explore Story
La Granja Ibiza is a place like no other. Launched in collaboration with international association Friends of a Farmer, the property—a Design Hotels member—is spread over almost 25 acres and dates back to 1816.
0
0
0