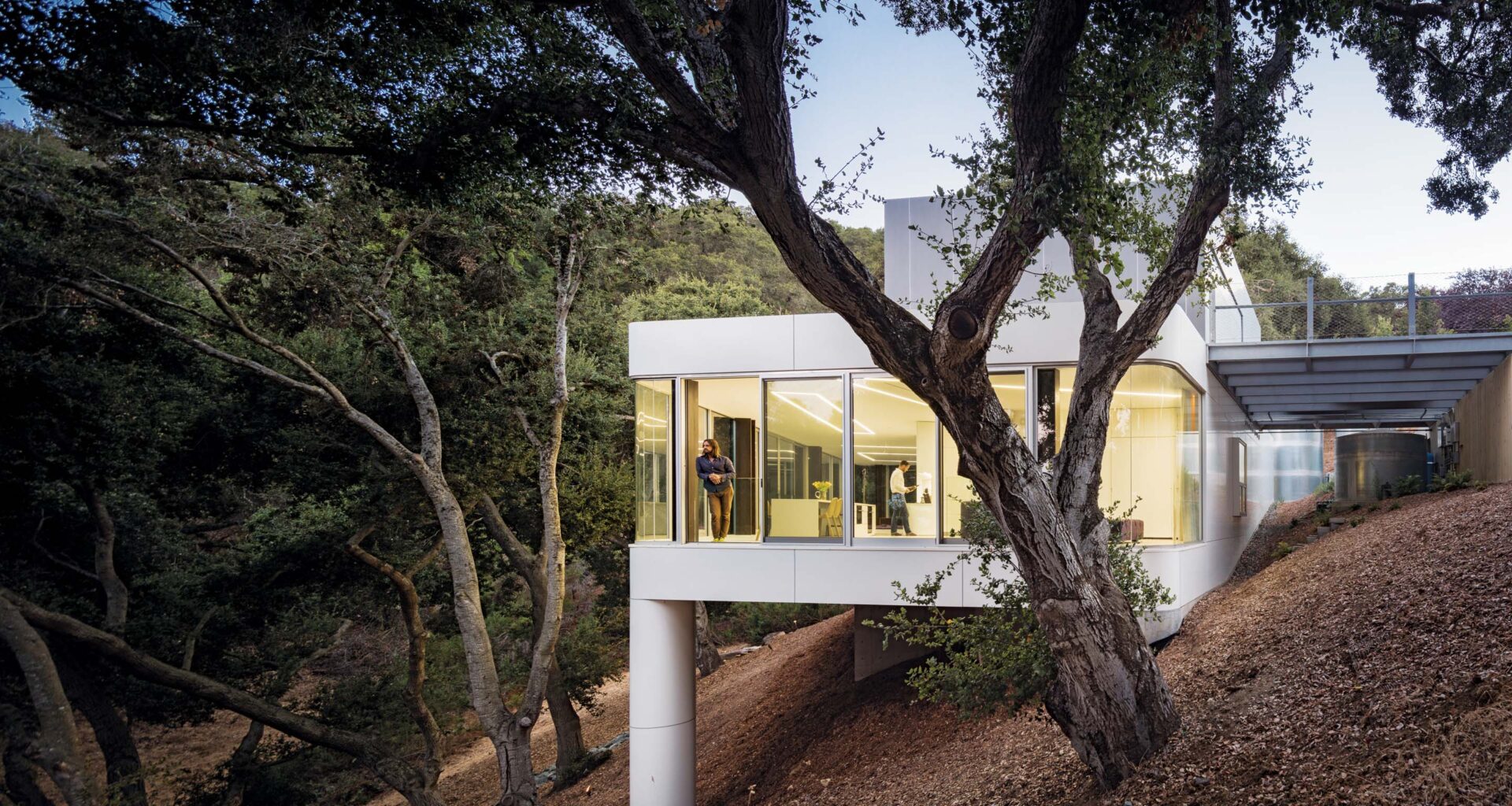 With Pam and Paul’s House, an unambiguously work of modern architecture in Cupertino, California, architect Craig Steely is in his element—at the intersection between the natural and built environments.
Total
0
Shares
0
0
0

Fixed to a Steep Slope, a Home of Vast Glass Straddling the Boundary Between the Silicon Valley Suburbs and the Wilderness Beyond, Reflects Architect Craig Steely’s Highly Conceptual Point of View

“I’m interested in the dialogue between man-made forms and natural forms, in creating spaces in nature,” says the architect, who grew up in the California mountains.

He made stuff, observed things, and improvised.

“Some of my earliest memories of space were formed around things I discovered outside; things in nature, like the way a path wound between two rocks or how a circle of pine trees created a room. I felt these reverences or feelings of architecture before I even knew what architecture was!”

Craig Steely’s noticing of these spaces grew into creating these spaces, “first in a tree, or stacking rocks, or out of driftwood on a beach,” and “later in buildings that have a strong reverence for nature without trying to copy it.”

These buildings form a compelling and ambitious body of work that includes Craig Steely’s Lavaflow series of Hawaii homes, a boxy houseboat in Sausalito, and a pair of pyramid-shaped towers in the jungle cliffs of Sayulita, Mexico.

Given the conceptual nature of his work, it’s not surprising that Craig Steely is a draw in Silicon Valley, where he designed a seemingly roofless house before completing the 2,600-square-foot Pam and Paul’s House.

Tucked in the foothills of the Santa Cruz Mountains, the latter house exploits its extravagant connection to the natural setting and is another unequivocal, almost transgressively minimal modern form from Craig Steely. But this house, with all its glass, appears to hover over a grove of mature oaks—a heaven above the earth.

It is also a haven and, all observable evidence to the contrary, a grounding for its owners—technology workers eager to embrace nature.

“They wanted a life that encompassed both,” Craig Steely says of the pretext for the project.

Only, the site was sold as an unbuildable lot. And it was unbuildable, or would have been, “…for a conventional house,” corrects the nonconforming Craig Steely.

This is not that.

“This is a house that would not fit anywhere else.”

Primarily composed of steel and glass, with an observation deck and a garage and foyer of zinc panels and mirrored glass meant to reflect both the sky and surround, the concept for the house came to Craig Steely clearly and quickly—float a glass box in the leaves of the trees on two trunk-like columns, disrupting as few oaks as possible.

“The dense tree canopy offered the opportunity to build a completely glass-walled house, protected from the direct rays of the sun, yet filled with dappled sunlight,” Craig Steely explains.

Arriving at the top of the slope, looking over the top of the oak grove, “You enter the house onto a sod roof that feels like an open grassy meadow in the treetops. You climb down a stair into the living floor which is nestled in the oak canopy. Gray squirrels run along the branches and wild turkeys roost in the treetops, just 10 feet away from the kitchen table.”

Mule deer also roam the land as if it were never touched.

“The expanse of glass,” he notes, “feels permeable and disappears only to leave nature as it always has been in the grove.”

The glass is a sieve for streams of sunlight that flood the space, lending warmth to the austerity of the open-plan interior, which lacks visible systems and superfluous fittings that would otherwise cloud the dominate views of the landscape—sacrilege in this house.

Craig Steely’s program called for cantilevering the main living area into the tree canopy while, in a gesture of both utility and fluidity, concealing bedrooms, bathrooms, service, and storage behind a long wall of cabinetry. The home’s living room, office, and kitchen, meanwhile, are distinct spaces, but delineated spatially by having been sunk into the concrete floor, and further defined by material.

“In the sunken office, all surfaces—flooring, desk, cabinetry—are milled from a single slab of Chinese pistachio,” according to the program notes.

“The sunken living room is filled with 250-square-foot of B&B Italia’s Tufty-Time sofa components. In the kitchen/dining room, a 22-foot-long counter of white composite quartz continues the kitchen work surface into the dining table.”

The sense of one continuous movement throughout the space is the result of several smart decisions, such as flush-mounted LED strips in the ceiling that indicate living zones. Outside, when looking up through the trees, one can see these geometric lines of light that Craig Steely says are “reminiscent of a Dan Flavin sculpture.”

Embodying Craig Steely’s brand of honest, undiluted architecture, Pam and Paul’s House is eminently functional and, as a form, filled with light and flow and feeling—something the architect, who splits his time between architecture studios in California and Hawaii, innately understands.

The work is at once thoughtful and adventurous; a project where one not only sees a vision of the future but the hand of one of its most prolific and insistent builders.

Explore Story
Steve Glenn’s eco-conscious LivingHomes gets more vertical with a new factory and its first development   Written by…
1
0
0
Explore Story
When developers first laid eyes on the parcel of land where they hoped to build a new luxury, mixed-use rental community, the downtown Santa Monica site was dotted with outdated fast-food joints and an antique mall. Parking also was difficult, as cars entering and leaving disrupted traffic flow.
0
0
0
Explore Story
Table of Contents A Graceful Spanish Revival Home is Expanded and Enhanced for Modern, Beachside LivingReimagined for Today…
0
0
0
Explore Story
One measure of a neighborhood’s desirability and charm is its walkability, a rare commodity in Los Angeles. Walking…
0
0
0