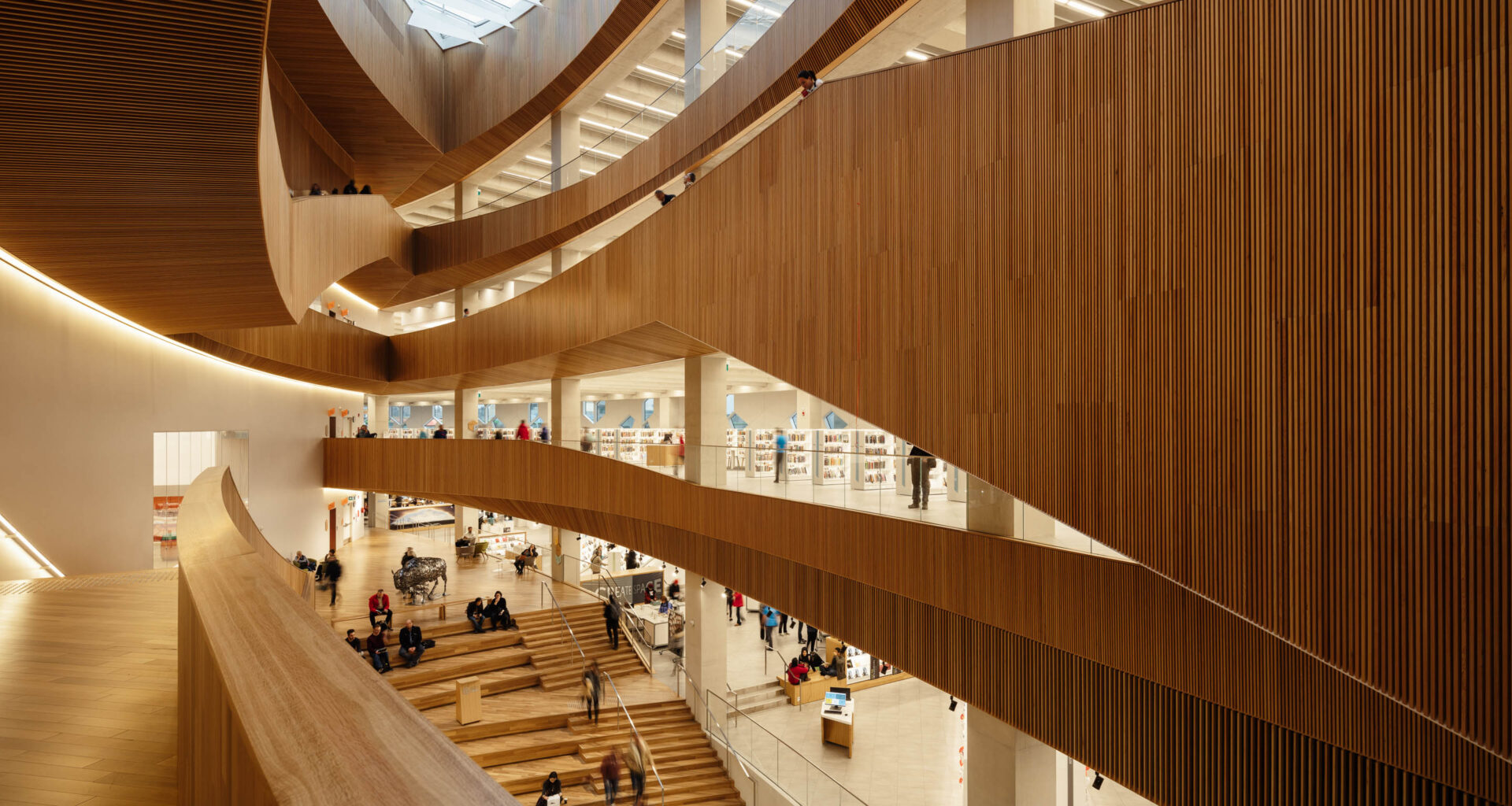 Calgary’s Central Library is an Icon of Contemporary Design

Designed for a growing city with a social-good focus, Calgary’s award-winning Central Library is a contemporary icon of cultural design—and a new blueprint for a time-honored typology.
Total
0
Shares
0
0
0

Beginning with its winning design entry for Bibliotheca Alexandrina—conceived as a revival of the fabled Great Library of Alexandria, Egypt, a city founded by Alexander the Great and sacked by Julius Caesar—Norwegian firm Snøhetta has completed one significant cultural project after another (including the 9/11 Memorial & Museum at the World Trade Center).

Having looked to the ancient world to create one library, Snøhetta, in collaboration with DIALOG, looked to the future to design another, Calgary’s Central Library in Alberta, Canada.

Turns out, what is key to an ancient city like Alexandria is key to a modern metropolitan one like Calgary—a high degree of civic engagement. That it is the tributary of a fast-growing city with a robust public library system, Central Library, which is part of a mushrooming cultural campus, was graced with 240,000 square feet of expanded facilities and marks Calgary’s largest public investment since the 1988 Winter Olympics.

It was never going to be a by-the-book project. But then, it couldn’t be, could it? Not with a site bisected by a fully operational Light Rail Transit Line, a building whose every side function as its front, and a flashing crystalline façade featuring a hexagonal pattern in alternating panels of glass and iridescent aluminum. This is a library? Indeed. The library of the future.

Intellectual without airs, Central Library is a bit of a mixed bag with books among broadcast facilities for homegrown YouTube and podcast productions. With the architecture intended to support the library’s historical role to provide resources and serve as a point of connection for the community, the Central Library schematic is one that drives interaction: visitors arrive at the facility from all directions via moderately terraced slopes, and an outdoor amphitheater is meant to accommodate library programming should it spill outside.

And then there’s the summons of nature. The library invites Calgary’s mountains and prairies into the urban cityscape, and its sunlight to flood the spacious, open interior, providing both warmth and orientation.

As a showpiece, the place does not disappoint—that’s what $245 million can buy. While the price tag is ostentatious, the result is one of deliberation and restraint, based more on a material beauty that is hard to miss. Wood is a wonder here; throughout the interior, a sustainably sourced western red cedar from nearby British Columbia offers an organic richness that suits cowboy-hatted Calgary.

Wood slats line the perimeter of the spectacular open atrium, and wood spirals rise up to a view of the sky through an oculus. Concrete, on the other hand, is left exposed and unfinished, with beams and columns meant to recall a stoa—the open-air colonnades of ancient Greek architecture that doubled as gathering spaces. “The rawness of the material palette is intended to give people the sense that the library is a place of engagement, rather than a sacrosanct repository for books,” according to Snøhetta.

Ordered on what Snøhetta calls a fun-to-serious spectrum, the library’s pubic spaces occupy the lower levels, including the lively Children’s Library and its playhouses. Higher up are studious environments like the Great Reading Room—a jewel box of focused thought supplemented by creative inspiration via the Artist in Residence Studio.

In this space, one reflects on one’s own thoughts or, more ambitiously, those of the great Athenian thinker Plato, whose works were once housed at the Great Library of Alexandria as they are now at Central Library, and who wrote: “A house that has a library in it has a soul.” The same must be said of a city and its library. In Calgary, this speaks volumes.

Explore Story
Take a look at the Grand Opening of a new luxury development by the Chadmar Group as they fuse nature and design at the residences at Rolling Hills Country Club. Properties range from $2-5 million. Cliff May was a well-known builder and proponent of the California ranch home, designed as the “dream home” for the many Americans who settled into the newly-formed suburbs of Southern California during the post-war period. Joining elements of Spanish Revival architecture with Modernism, the appealing homes were low-slung structures with a horizontal orientation and a design that focused on easy living and welcoming in the outdoors—and they sold like hotcakes during the 1950s and 1960s.
0
0
0

Explore Story
At night, this dazzling residence resembles a high-end designer light fixture, replete with soothing luminescence filtering beyond a…
0
0
0

Explore Story
Set in the South Bay, this home combines a soft palette of off-white tones with Ipe wood and…
0
0
0