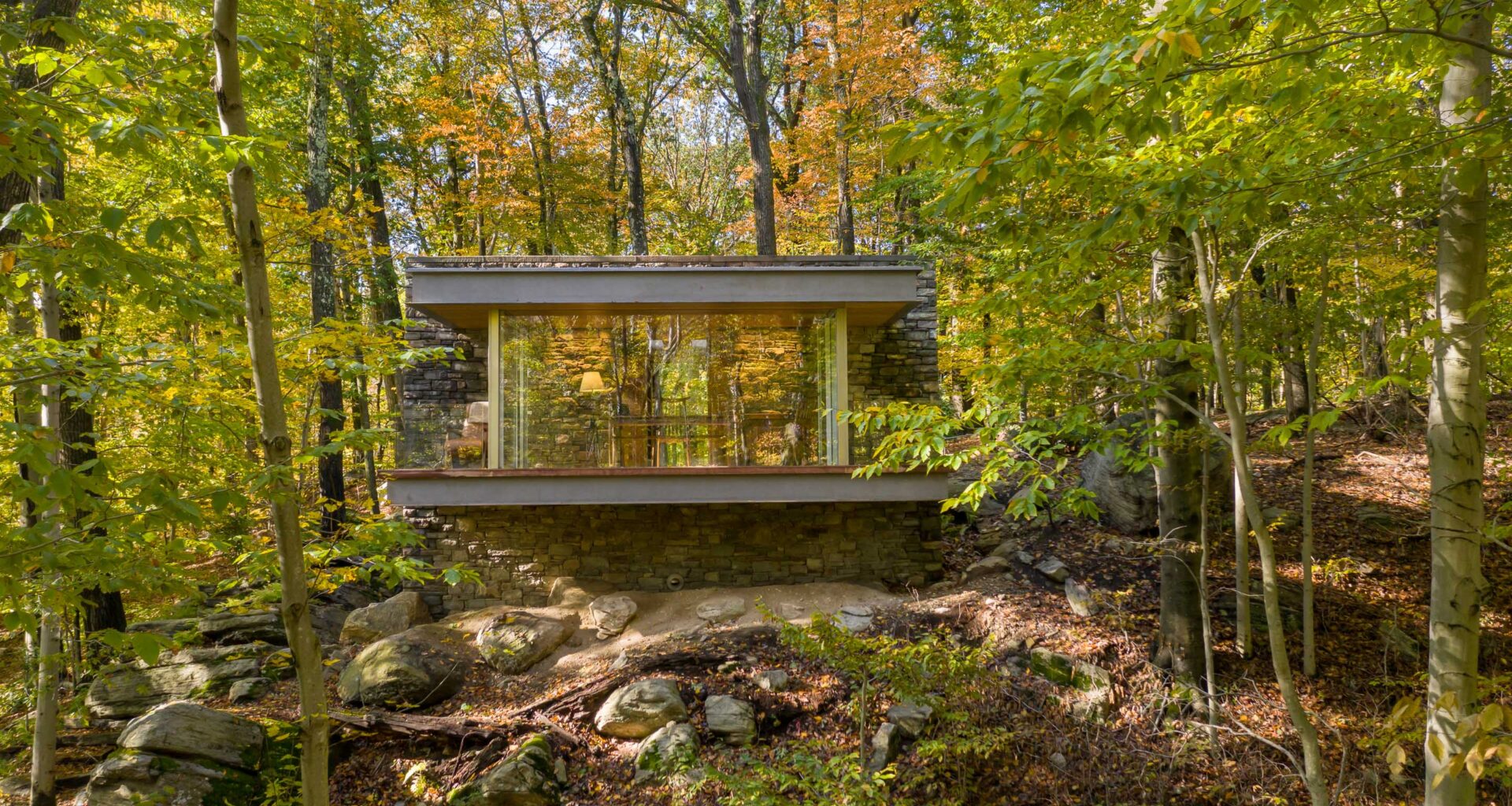 In the Woods of New England, the Writer’s Studio by Eric J. Smith is a Paean to Purity and the Creative Process

His client: a published poet positively predisposed to the essential qualities of Thoreau’s cabin in the woods.  Smith’s task was to refine the rustic with a piece of architecture similar in feeling—simple, pure, with a sense of persistence. No allegiance to a particular time but strong ties to place.

“Clarity was the goal,” says Eric J. Smith of creating a building with no ambiguity. When entering the space the impression is one of compression, emphasized by ceilings set slightly lower than the 8-foot standard.

“It can be very compressive to try and organize your thoughts,” explains Eric J. Smith of the choice. But once past the corridor of bookshelves hosting the owner’s 1,700-volume library of verse, he adds, one arrives inside the glass box—an “explosion of space where it’s just you, a chair, and a table. There’s nature all around and a beautiful 180-degree view.”

Cantilevered over a bluff, the design capitalizes on its proximity to the natural world,  mimicking its character with a limited palette of materials including oak, stone, and glass. The latter material is engineered to open, sliding into the rock walls, though the largest pane is fixed and weighs nearly a ton. The glass makes for an experiential space of all seasons, one that welcomes in blasts of winter light and shade from the growth of spring.

That there are no visible modern systems to thin the effect is a credit to a series of decisions, from Smith installing a geothermal heating and cooling system that requires no exterior equipment, to the installment of lighting that is recessed into the reveals where the stone wall meets oak plank ceiling. No trim or molding is used.

“When you look at the materials, you see it all,” says Smith.

The architect is the first to admit that the simplest projects are the most complex and Writer’s Studio follows suit.

“When you look at the pictures now, the building looks like it is just sitting out in the middle of the woods, but imagine having to get trucks and workmen in there,” says Smith, noting that a corduroy road was installed for this purpose, boulders were marked and numbered before being cleared, and trees protected.

“It took about 14 months so that it would feel natural, like the forest grew up around the structure,” he adds.

“It’s a small little jewel, but like a diamond it takes years of pressure.”

With the region having been battered by Hurricanes Sandy and Rita, the client told Smith: “If a tree falls on the building, I want it to stand.”

“Fundamentally it is a structure built to last forever; it has a robust feel,” says Smith, who credits his collaborators in this effort, Nordic Custom Builders and D.R. Pilla Engineers as particularly key to the project, along with masons and the mill workers who completed cabinetry from his mockups.

“The building reads as essential because while every edge was carefully studied, no corner was cut,” he says.

Explore Story
When a starkly geometric home appeared on 10th Street in Manhattan Beach in the mid-1990s, it was a…
0
0
0