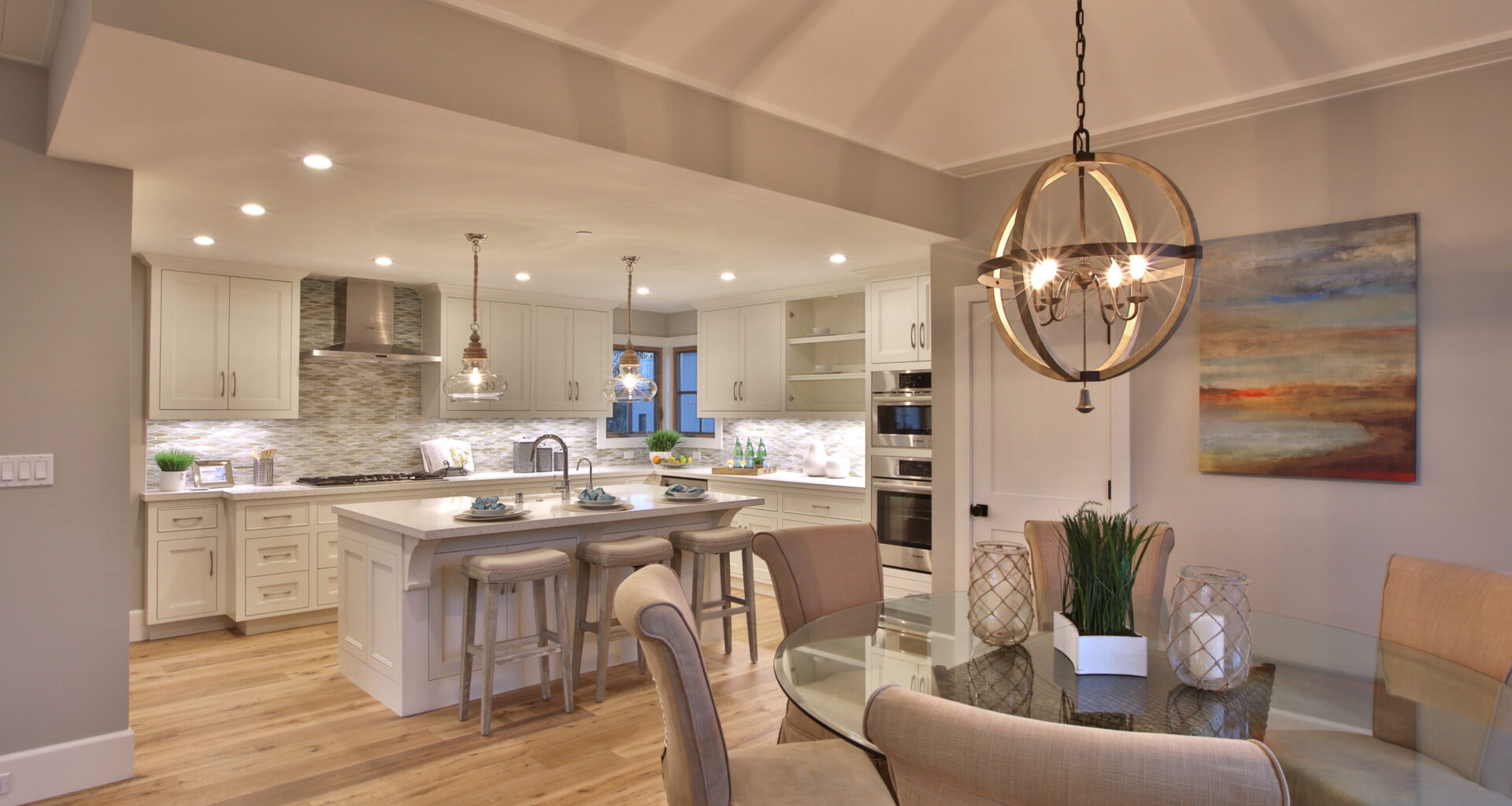 The new, crisp white home on 1617 Hermosa Avenue—steps from the action on the beach and Pier Avenue—neatly exemplifies an aesthetic that’s been cropping up throughout the South Bay.
Total
1
Shares
0
0
1

Beach-conscious features and a central Hermosa location make for an of-the-moment home with charmed touches.

The new, crisp white home on 1617 Hermosa Avenue—steps from the action on the beach and Pier Avenue—neatly exemplifies an aesthetic that’s been cropping up throughout the South Bay.

“The old traditional style, called California Mediterranean or California Tuscany, we were doing that for years and years,” says Otto Palmer of O.P. Construction, who is general contractor for the project. “It’s sort of phased out, and in its place you have either the soft contemporary or the California coastal, which has similarities to plantation style.”

Otto Palmer has just wrapped the home with a team that includes Trotter Buiding Designs, interior designer Jennifer Allison and the property’s developers, Bryan Haynes and Barbara Haynes. “In reality it’s a team effort,” says Otto Palmer of the group, who came together on this project to showcase an arsenal of South Bay building and design know-how.

The three-story residence utilizes an efficient floorplan that makes the most of its modest corner lot, resulting in an inviting, roughly 2,800 square foot home. Rooms on the first and second floor, a hub for the home’s four bedrooms, are intimately scaled, playing up the homestyle charm of the place. Throughout, white walls contrast against oak-plank flooring, and clever window placement allows for ambient light to flow throughout the home without sacrificing privacy.

“You have some interest, so when you open the door you want to go in and look into it a little further. A lot of times you’ll just open a door and go, ‘Oh yeah, a bedroom,’ and close the door and move on. We’re trying to draw people into the various spaces.”

One such space is the home’s central stairwell, which zigzags clear up to the sunlit, open-plan third floor. Along the way, distinctive, pure-white Chinese Chippendale railings call attention to warm tones on the stairs. The feature, borrowed from Thomas Chippendale’s Oriental-inspired designs of the 18th century, consists of a series of interlocking rectangles that are positioned in the space between the top and bottom rails.

“It’s so old it’s kind of new,” says Allison of the touch. The designer, who’s known for producing fresh, beachy interiors with an elegant slant, has left her artistic mark throughout the home, from its finishes and cabinetry to its flooring, lighting and overall color scheme. And the railings? They’re the result of a trip she took to North Carolina, which included time spent among old beach cottages.

“That Chippendale railing was everywhere,” she says, adding with a chuckle: “So I brought it back with me.” Consistent with the home’s California coastal style, which looks to forge symmetry between the interior and exterior, these decorative railings are also seen on the balcony and porch, and along the border of the rooftop deck.

The communal center of the home is on the third floor, a space where the outdoors seep indoors. There are a lanai living room and entertainment area, a place of high ceilings—raised and textured—a prim fireplace and a wall of accordion doors that open onto a deck of 200 square feet, overlooking Hermosa Avenue. “Those doors fold all the way to the side so it becomes a living space, as opposed to just an exterior space where you have outdoor furniture,” explains Otto Palmer. “It extends the living room out.”

The kitchen, also on the third floor, is equally airy, with sandy hued, wavy backsplash tile that frames the brushed-metal appliances. Allison points out that the home’s tiles were sourced locally from Lunada Bay Tile and created in large part from recycled post-consumer material. Whether in the kitchen or in the three-and-a-half bathrooms, all tiles were selected for their ability to evoke an aquatic theme, whether from a pattern or soft shades of blue or green.

From this floor one can step out onto a slender balcony and follow a staircase that winds up to the rooftop deck. An ideal perch to watch the sun dip into the Pacific or soak up the sun in the midst of day, the spot is nicely shrouded from the street, and delivers an open swatch of beachfront and sky. “It’s a rooftop deck to take advantage of the views and the openness,” points out Otto Palmer. “And just hang out.”

Easy In, Easy Out

The team made design choices to optimize the happening California beach location, and specifically, the ability to engage in fresh-air activities year-round. “That’s why there’s an outdoor shower,” Allison points out. “That’s why there are shutters on the windows down below, not heavy drapes. We were going for a light and bright and airy look.”

Other outdoor-living elements include a built-in cubby bench and peg rack near the entrance where one can quickly cast-off shoes, towels, and beach gear before heading upstairs. Nautical style lighting, from rugged bell sconces on the exterior to a duo of glass-globe fixtures affixed over the kitchen island with rugged rope cords. There’s a fireplace in the master bedroom to temper the chill of cool nights and a spacious, entry-level garage where you can have easy access to surfboards, bikes and more.

Standing along one of the home’s exterior perches on a midsummer’s day, you get a bird’s eye view of the parade of scenes along the street below: girls and guys strolling in their swimsuits, cars cruising along the avenue and bicyclists pedaling by. Steps away, a docket of restaurants, stores and bars center on Pier Avenue, a four-minute stroll. Though much closer is 16th Street, a leisured walkway of South Bay bungalows, shrouded by palms, that ends at the sand and Strand, where people play volleyball, jog, and walk their dogs.

From this elevated perch, one realizes the luxury of being able to instantly toggle between the sunny outdoor bustle and the home’s quiet, polished interior. To go from an afternoon of surfing, sun-lounging or biking, to an evening of restaurants and lounge-hopping, then quickly make your way to the still and comfort of your beach house. It’s an effect that’s not lost on the building and design team, either.

“Living in a home is really an emotional experience,” says Otto Palmer. “So it’s not just putting up a structure. It really is trying to create some kind of connection. It’s just a feeling you get when you go into a space and you like it, starting from the moment you walk into the house.”

Explore Story
The sunlit Palos Verdes villa offered by Megan Neel—approximately 11,000 square feet in size—is perched on approximately 200 feet of peninsula oceanfront, and no matter where one roams on the five-bedroom property, one is always aware of this happy fact.
0
0
0
Explore Story
In the sumptuous new tome from Rizzoli, Houses by the Shore: At Home with the Water—River, Lake, Sea, by Oscar Riera Ojeda and Byron Hawes, there are 35, all of which the Frank Lloyd Wright way take shapes in striking architecture that draws its power—and poetry—from a natural context.
0
0
0
Explore Story
“It’s great time to be a designer in Downtown L.A.,” says Norella Carboni Amiel, director of design for Omgivning, a practice that is on the march in architecture and interiors, prolifically so in Downtown Los Angeles,
0
0
0
Explore Story
Table of Contents A Two-Story Craftsman at 601 El MedioExpansive Corner LotThe Interior Amplifies the ExteriorA Long Alfresco…
0
0
0