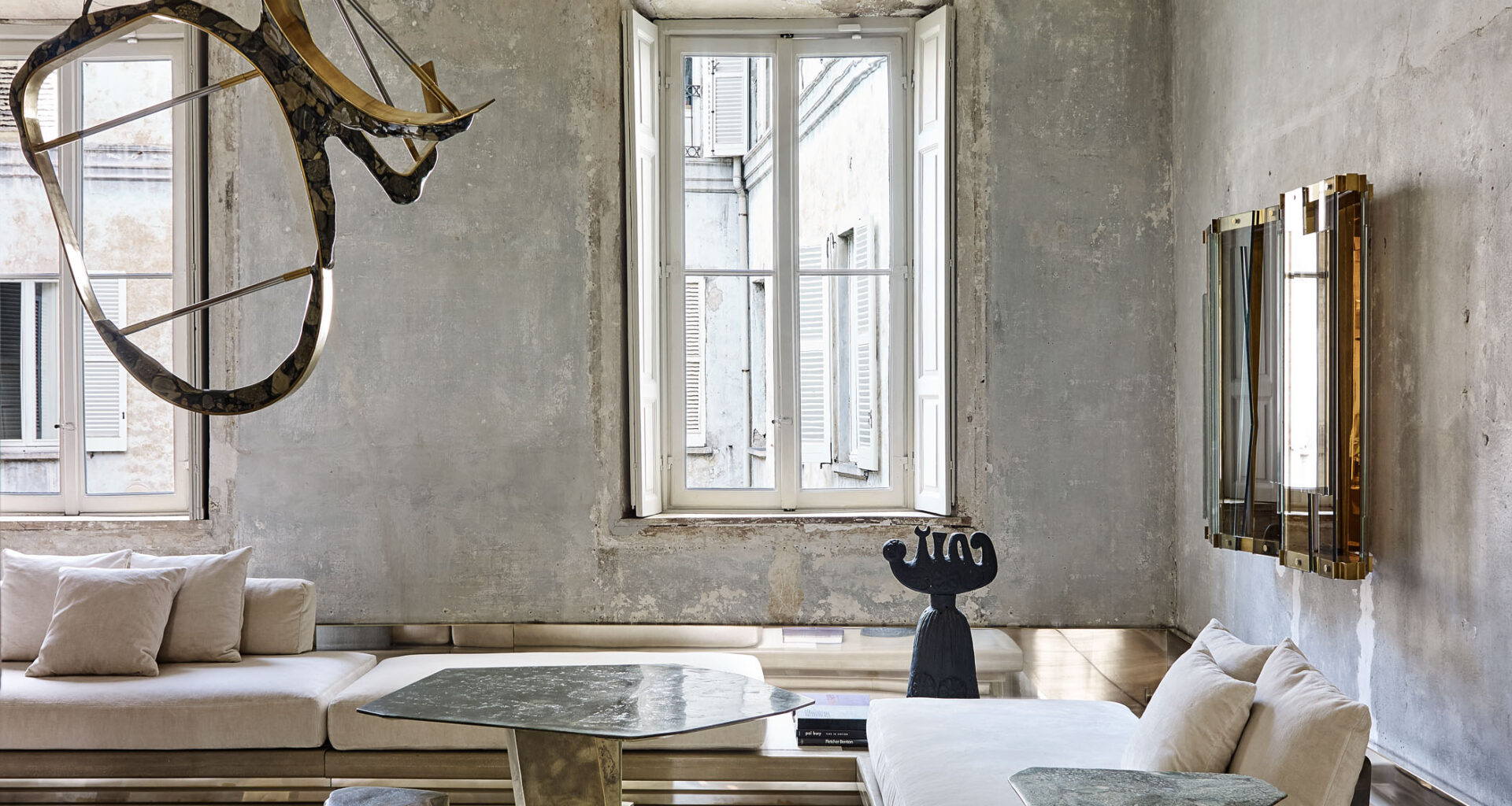 Where does the story for a centuries-old building truly begin? As it pertains to Italian artist and architect Vincenzo De Cotiis, the question is not nearly as interesting as to how the story ends, particularly in the case of the austerely done residence he designed inside a badly neglected palazzo near central Milan.
Total
0
Shares
0
0
0

Beneath the Surface of an 18th-Century Palazzo in Modern Milan, Italian Artist, and Architect Vincenzo De Cotiis Finds a Primitive Beauty to Backdrop His Artful, Starkly Minimal Apartment

The ancient edifice immediately appealed to Vincenzo De Cotiis, who is quite partial to the serious and historic, and he commenced an irreverent deconstruction of its interior so that the noble building might live again, only beautifully reborn, stripped of unnecessary decorative gesture and nearer to its roots.

In seeing beyond crumbling walls and layers of decorative excess that had been added over decades, Vincenzo De Cotiis discovered a building both sturdy and enduring, and, unique for its type, in remarkably serviceable condition with original floors and ceilings intact.

“It was really quite a miracle to have found it like that!” confesses Vincenzo De Cotiis, who shares the roughly 3,000-square-foot apartment with his wife Claudia Rose in Milan, Italy. Apart from needing to allocate some space to new technical systems, he “preferred to emphasize the pre-existing and to enrich it with some surfaces that contrast each other, creating a container, which is visually very exciting while at the same time respectful.”

Enriching the existing is Vincenzo De Cotiis’ métier, and in doing so here he fashioned a space that, though decisively of a period is forcefully, almost relentlessly, current.

Despite the lack of structural alterations needed, the space was a decorative wasteland—false ceilings, ugly moquette floor coverings—when Vincenzo De Cotiis began peeling away layers of paint and paper that had been applied over many decades in order to restore its Old World inheritances and character, which includes a bit of the Baroque. In wanting to preserve the history and mood of the space, Vincenzo De Cotiis’ excavations revealed its original paint colors and ceilings.

“I then worked out what my intervention needed in a contemporary way,” he says. Leaving walls untreated, for example, to accommodate “a bit of plaster dust if you brush against them,” he continues. Every room features the remnants of a different color. Pink in the library, blue in the bedroom, ochre in others.

“You can still see the gold traces left behind from the 18th-century stuccos,” says Vincenzo De Cotiis. These soft colors and lovely light coalesce as a canvas where metallic surfaces shine amid the distress.

Having described his work as “anti-design,” Vincenzo De Cotiis’ interior—a juxtaposition of old bones and new works—is astonishingly confident. Nothing is uniform, least of all the tone, and it is full of contorted forms and futuristic feeling. Decadent in abstractions designed by De Cotiis and produced in Italian ateliers, the space is equal parts apartment and gallery for the avant-garde, a showcase for the designer’s interest in aging objects and the pursuit of “perfect imperfection.”

One can scarcely imagine more from something so minimal. The place is a fascination, with spacious, well-illuminated rooms, and an extravagance of elements from an older time (fading frescoes, imperfect finishes) contrasted with contemporary designs—a dining table of silver-plated brass and recycled fiberglass, a velvet-covered daybed in pale pink, a pair of marble and cast brass coffee.

Tables. In its entirety, the space is an example of Vincenzo De Cotiis’ allegiance to Italian craftsmanship, none more interesting than his own. “It’s unique because almost everything is custom-designed by me,” says Vincenzo De Cotiis, who utilizes both classic and sustainable materials in his work.  “It’s full of collectible design pieces.”

Full, but not excessively so—the apartment is airy and spacious. Vincenzo De Cotiis is not opposed to spectacle (his sculptures are fantastic proof of that), but he is masterful at exercising restraint. There is much to admire in the apartment, but that it is not everywhere—packed into every nook and cranny, consuming every inch of floor space, running wild up the walls—allows the space to feel almost radically monastic.

Light is likewise fundamental to the project—slightly Impressionistic in quality, it is highlighter and halo alike. “The natural light entering my home has always surprised and inspired me,” Vincenzo De Cotiis muses. “It looks different and changes the colors of the entire space.”

Dancing off surfaces and amplifying finishes, the light lends everything a gauzy overtone, as if a protagonist in a Luca Guadagnino film. But this is no set-piece, nor is the space meant to be precious. It is, rather, despite its angles, the shock of its monoliths, enthusiastically lived-in. And loved, particularly in the time of pandemic, when the home is more than most dare to imagine. Except, perhaps, this architect, and this home.

“It is my island of peace,” says Vincenzo De Cotiis. “I’m a very lucky man.”

Explore Story
The namesake and creative director of the eponymous firm NICOLEHOLLIS pays a lot of attention to context and purpose when designing a new space. Established in 1948 by John and Elinor McGuire, McGuire Furniture reflects a sense of luxury combined with the laid-back spirit of coastal California.
0
0
0
Explore Story
Whether home or hotel, colors, materials and motifs inject personality into any space, defining and giving it soul. From Denver to New York to Los Angeles, three audacious examples push the limits of design to exceptional results.
2
0
0
Explore Story
Properties boasting a duo of spacious master or en-suite bedrooms offer the ultimate amenity to L.A. homebuyers Written…
0
0
0
Explore Story
KAA Design rethinks a mainstay of local outdoor living for a contemporarily conceived oceanfront abode on The Strand…
0
0
0