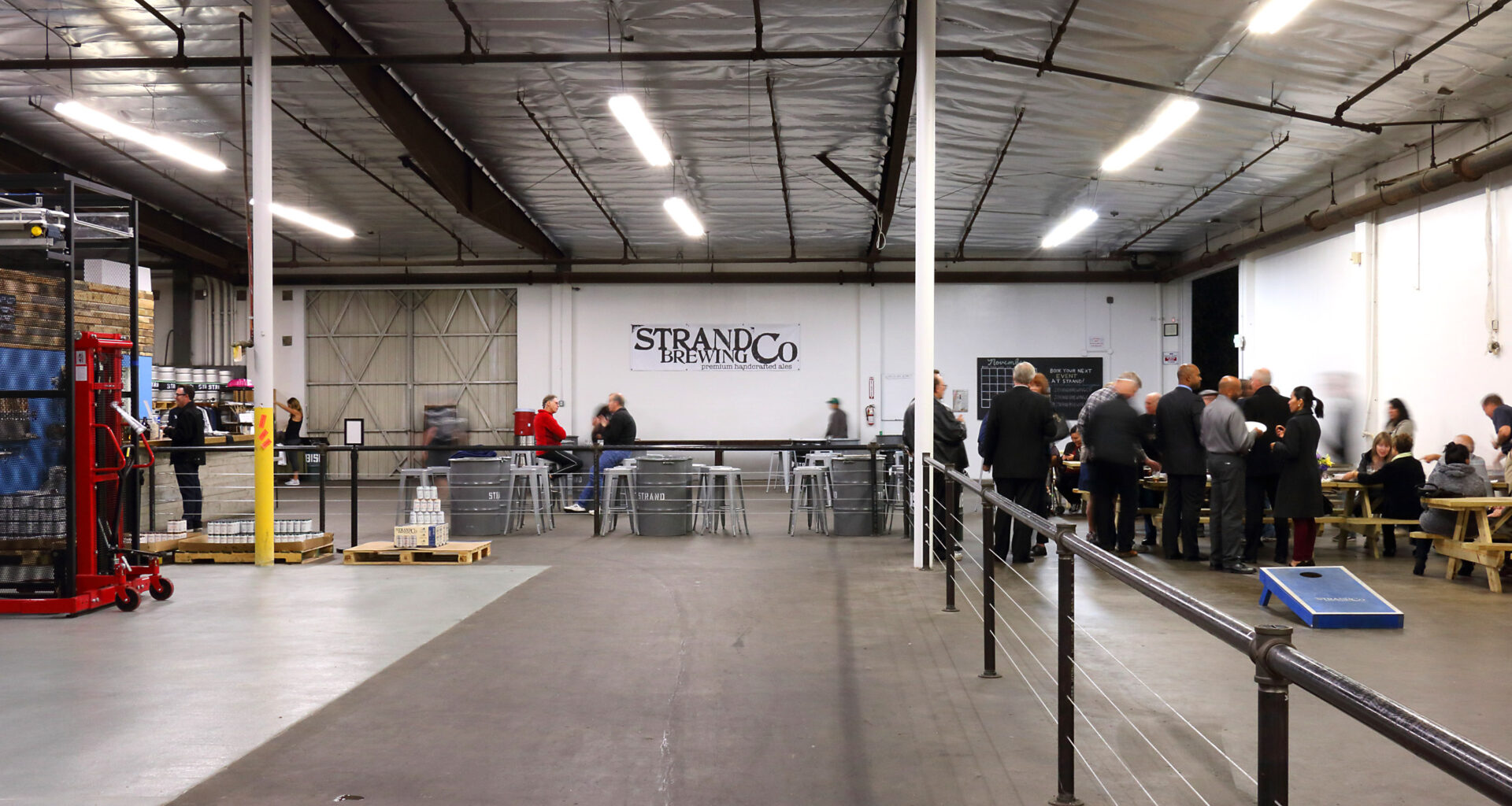 Strand Brewing Co: The Old Guard of the New Wave

If you swing by the Strand Brewing Co taproom one evening— they’ve moved to significantly bigger, 36,000-square-foot digs, and are open to the public from Tuesday (starting in March) through Sunday—you’ll find a place that aptly reflects the family-friendly, good-time spirit of the South Bay.
Total
0
Shares
0
0
0

In 2009, when Rich Marcello and Joel Elliott set up Strand Brewing Co in a 1,000-square-foot space in Torrance, they were the only manufacturing craft brewery in the area.

“Prior to 2009, the South Bay wasn’t on anyone’s radar for beer,” explains Rich Marcello.

Nowadays, they are joined by a slew of other local colleagues, including Monkish, Absolution, and Smog City—some of the nearly 10 craft breweries in Torrance alone.

There’s plenty of beer (including offerings only available in the taproom, such as their pleasingly crisp Blond Ale) and, depending on the night, street-style tacos, smokey barbecue or other complementary delights from visiting food trucks.

Credit the success of Strand Brewing to producing great craft beer that was ardently hand-sold into local accounts by Rich Marcello. (Think of partner Joel Elliott as the beer master, and Marcello at the helm of marketing and business.)

“For the first six months my only accounts were here in the South Bay,” Rich Marcello says. Nowadays, Strand beers can be found throughout the entire state of California, though their focus is still on Los Angeles and Orange County. Recently, they’ve begun distributing their beer in cans, marking a new growth stage for the brewery.

“If we didn’t succeed early out of the gate,” says Rich Marcello, “if we had fallen off a cliff, I don’t know how many people would have thought, ‘that’s a great idea, let’s follow them.’”

Throughout its growth, Strand Brewing has stuck to its welcoming, unassuming origins. When I show up, there’s no sign on the place. The Doors is cranking and a beer maker wearing rubber waders and tending the tanks greets me with a smile.

Despite running a growing company, Rich Marcello still takes time to leisurely walk through the current taproom lineup. There’s Strand Brewing’s flagship offering—24th Street Pale Ale, an even-keeled beer that offers up floral and fruit notes along with some hop—and many more on the docket. There’s something for everyone. (Note to wine drinkers fond of effervescent, fruit-crisp varietals: Strand’s Raspberry Blond is a welcoming entrée into the beer world.)

After a while, Rich Marcello points out: “When you call yourself Strand Brewing, you have an obligation to do it right.” He points to a familiar image on the front of a bottle. It’s a Strand lifeguard tower, their logo.

“What’s that one thing that geographically and socially connects all of the South Bay? It’s that concrete slab called the Strand, and it has so many positive images and memories.”