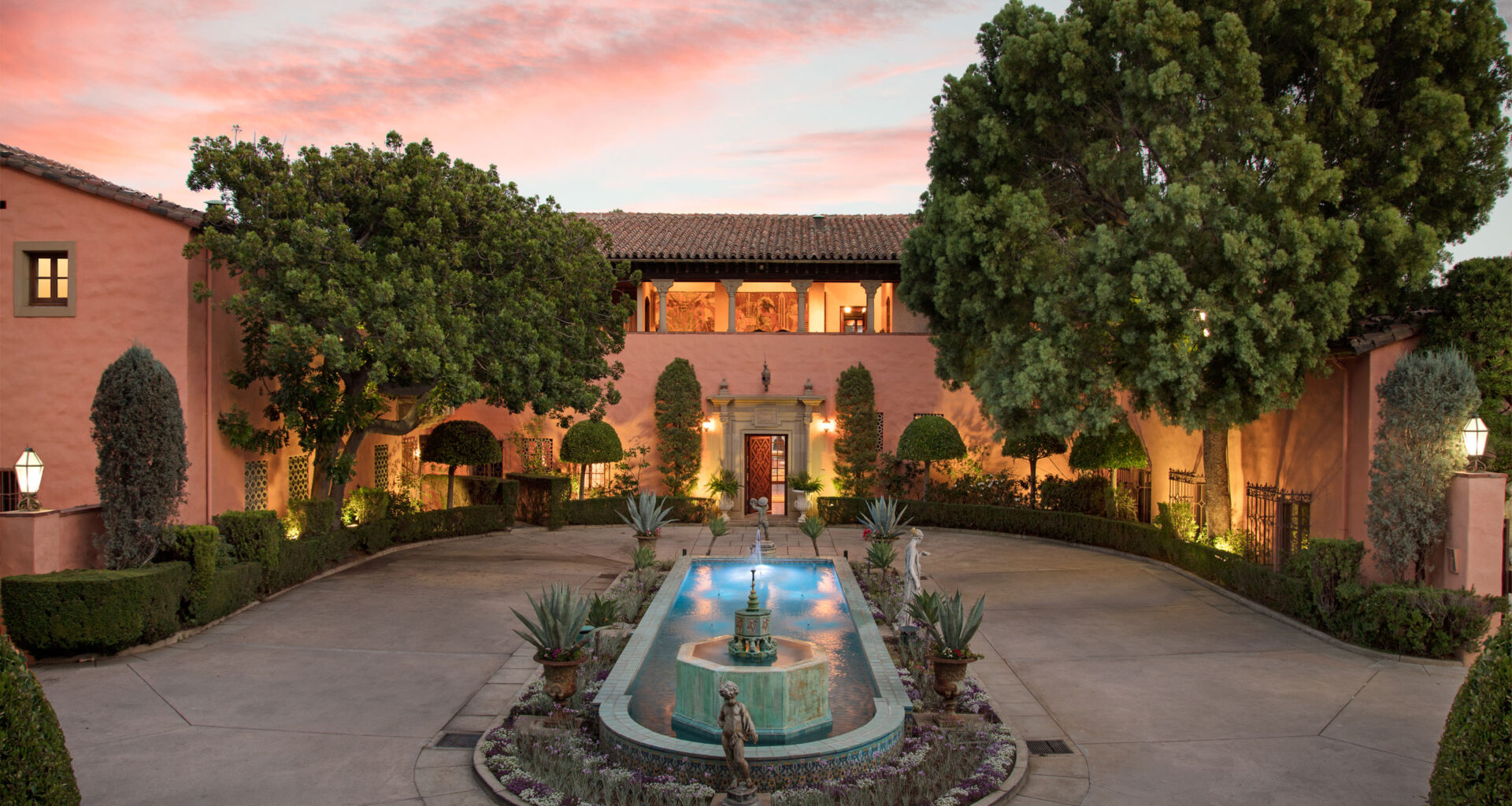 If opportunity knocks, it is at the illustrious doorstep of The Hearst Estate, now on the market for $89,750,000, but of infinite value. Centrally located in Beverly Hills, just north of Sunset Blvd., the listing marks a “rare and prestigious opportunity to acquire one of the 10 most iconic homes in L.A.,” says Anthony Marguleas, founder of Amalfi Estates. “These rarely come available.”

The Hearst Estate, he notes, is in truly elite company, with the only other addresses of comparable standing being Chartwell, The Playboy Mansion, Owlwood, The Harold Lloyd Estate, The Knoll, The Jack Warner Estate, Casa Encantada, Greystone, and Pickfair. Yet even among this group, The Hearst Estate is a highlight.

Once home to publishing magnate William Randolph Hearst and actress Marion Davies, the legendary lovers featured in the Academy Award-nominated film “Mank.” This coveted piece of history went on to even greater fame, welcoming a parade of luminaries through the years, including none other than John F. Kennedy and Jacqueline Kennedy, who honeymooned here in 1953 (a four-page letter from them is on display at the estate).

“The Hearst Estate is anchored in American legend,” says Anthony Marguleas. “The house is a prized property for collectors of the finest architecture.” The Hearst Estate is still intact and aging gracefully, its pink terra-cotta stucco edifice as famous as any star in Hollywood who has waltzed through its halls, and whose elongated colonnades, sunlit terraces, and arched windows evoke thoughts of the Alhambra Palace in Granada, Spain.

Set on 3.5 acres of private grounds, where arrival comes via one of the city’s longest driveways, The Hearst Estate might just mark the grandest of all entrances. With 36,000-square-foot under roof space—29,000 square feet in the main house and over 7,000 square in ancillary structures including two staff/guest apartments, a pool house, tennis pavilion, and two-story, five-bedroom gatehouse—the estate can comfortably host 1000 guests, making it ideal for entertaining at its most elevated.

Should the party move outside, it will find a cinematic backdrop akin to a Moroccan garden. Here, manicured lawns and waterfalls interspersed with classical statuary, along with an Olympic-sized pool that could double for a Roman bath, coalesce to transport one from the heart of Beverly Hills to the court of an ancient-world emperor.

Inside the main home, generous dimensions mean no end to the glamour. Indeed, space is cavernous and abundant. Walls beckon for museum-sized paintings. Stairs call for gracious entrances and dramatic exits. Eight bedrooms—four suites plus two smaller bedrooms on the upper level, with an additional two bedrooms downstairs—and 15 bathrooms (four of them powder rooms) are among the extravagance of living spaces.

These also include a formal living room underneath a soaring, 22-foot-high arched hand-painted ceiling and a historic two-story wood-paneled library. So elegant, and currently in possession of books from the 1800s, the library can only fully be appreciated in person, notes Anthony Marguleas. The woodwork alone is something to behold. Other areas of note include projection/screening rooms, an art-deco nightclub, and a billiards room with rich herringbone parquet floors and a stately fireplace from the estate’s San Simeon sibling Hearst Castle.

Throughout are elaborate details—tiled floors, decorative ceilings—consistent with an era when opulence was the order of the day and the mansion class did not skimp on space, scale, or standards. All are omnipresent and speak to another time. But one surprisingly suited for today.  Space, in particular, suggests a family would be perfectly at home at the estate. While William Randolph Hearst and Marion Davies were never in want of company and had plenty of friends to fill every room in the house, a modern family can easily do the same, providing children with a wing of their own.

The property was previously listed for $165,000,000, which makes the estate’s current $89,750,000 price very competitive. “This property is finally priced to sell,” says Marguleas. Undoubtedly it will not take long.

Explore Story
Gabriel Hendifar and Jeremy Anderson, the duo behind Apparatus, met seven years ago in Los Angeles, where Hendifar was also born. And here they started to conceptualize their brand and studio while creating their first pieces.
0
0
0
Explore Story
An evergreen California home on sun-splashed resort grounds makes for a one-of-a-kind Beach Cities experience.
0
0
1
Explore Story
While strolling along peaceful, tree-lined De Pauw Street in Pacific Palisades, you pass many nice homes in various styles: Mediterranean, Plantation, Nantucket Modern and more. There are even a few charming ranch homes from earlier decades. When you arrive at the curb of this fresh contemporary home, though, you’ll likely stop for a double take.
0
0
0
Explore Story
Many partners are coupling interests and combining talents as seamlessly as a signature indoor-outdoor living space in Los Angeles. Not unlike the minds behind burgeoning L.A. design brand Hammer and Spear, spouses Scott Jarrell and Kristan Cunningham.
0
0
1