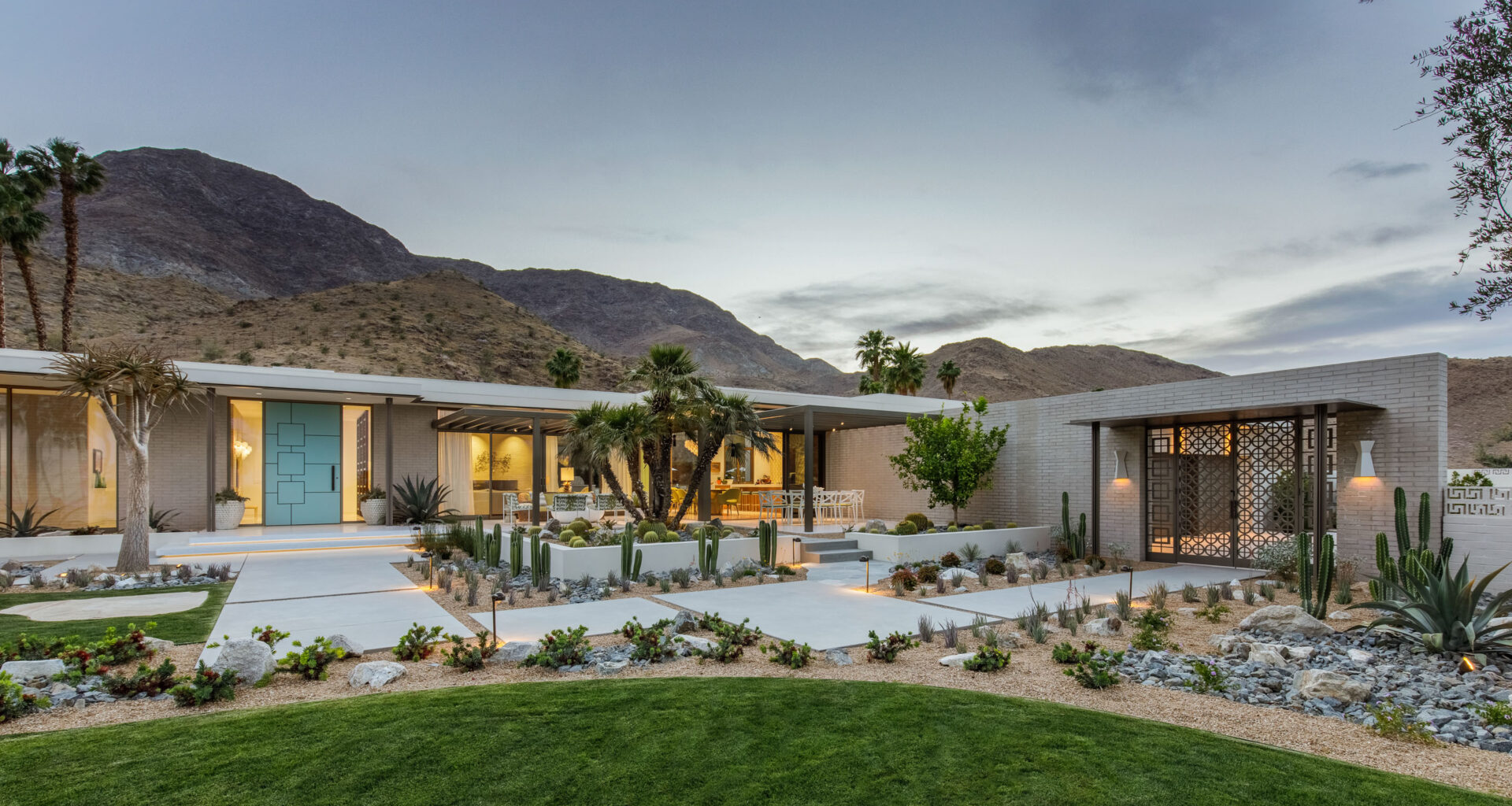 It is the second project designed by Stuart Silk Architects for this couple with young children, who, for their home in Rancho Mirage (located 10 miles southeast of Palm Springs) dreamt of having open and light-filled spaces that maximized desert and mountain views.
Total
0
Shares
0
0
0

“Our clients wanted a one-story plan that captured the feel and brightness of other mid-century modern homes in the region,” Principal Stuart Silk says. “The biggest challenge was to totally re-envision the layout and overall organization of the existing home.”

Also, notes the firm’s Senior Associate David Marchetti: “We had to create a design that balances period-specific, mid-century modern charm with modern detailing and flow so that the house feels contextually appropriate but still current and fresh.”

To transform the originally compartmentalized design, portions of the existing foundation and roof structure were repurposed; new brick walls, steel trellises, and large roof overhangs were introduced; the living room and kitchen were opened to two open-air terraces; the master bedroom was reimagined to open out to a private garden featuring a statue of St. Francis; and the swimming pool—previously positioned in the courtyard—was relocated and paired with a spa in the rear yard; among other changes.

Aesthetically inspired by the work of Richard Neutra, Le Corbusier and Mies van der Rohe, Stuart Silk Architects thoughtfully considered every detail—from the columns that refer to the iconic German Pavilion (also known as Barcelona Pavilion) to the decorative metal screens and concrete blocks (which act as brise-soleil) that were commonly used in many Los Angeles and Palm Springs houses from the 1940s, ‘50s and ‘60s.

“Although we wanted to capture the sensibility of other mid-century modern homes from the region, we didn’t want to simply mimic or mime,” Stuart Silk explains. “We tried to take ideas from a variety of sources to create a unique expression. For instance, we chose not to simply clad the home in stark white stucco. That just seemed too obvious. Instead, we incorporated brick with an off-white coloration.”

Other examples: colorful tiles in the bathrooms and kitchen, and glamorous furnishings and textiles throughout the home.

On the exterior of the house, which occupies a 1.3-acre site, traditional stucco combines with brick and bronze metal accents, providing a sense of timelessness and tactility. The custom steel columns—which are a modified cruciform shape formed from two back-to-back T-sections with an air space in between and with all of the fasteners concealed—feel sleek and light. Inside, white terrazzo (a material commonly used in the 1950s) with amber accents to echo the earth tones from the surrounding landscape blend with a mix of gray and gold chips of marble and glass on the floor.

“The homeowners wanted this house to feel classic with a playfulness appropriate for their family, which helped inspire some of the colorful and geometric decorative themes in the material detailing,” Marchetti explains.

Maison Inc. for the interior design and Anne Attinger for the landscape architecture also worked on this project where creating a fluid connection between the primary indoor rooms and the outdoor terraces was key. Floor to ceiling windows provide an abundance of natural light, bringing the desert landscape inside.

“What I like most is that the home is fitted for its site by capturing panoramic views of Coachella Valley and the Chocolate Mountains to the East and close views of the rocky faces of the foothills of the Santa Rosa mountains to the west,” says Stuart Silk. Meanwhile, the front glass gallery hall, which overlooks the gardens, features some of the owners’ larger paintings, making these art pieces the perfect complement to the captivating panorama.

With three bedrooms and a cabana containing two additional bedrooms, this sunny gateway is ideal for the growing family. “We were able to respond to our client’s goals of creating a throw-back home that is not so idiosyncratic that it will become dated,” Stuart Silk says. “With its classic lines and thoughtful proportions, it will provide a relaxed living environment for our client’s modern lifestyle for generations to come.”

Capturing the perfect balance between modern elegance and casual light-heartedness, this home maintains “warmth and human scale” according to Marchetti. For Stuart Silk, “the experience is one of living in nature.”

Explore Story
In Spanish there is a saying, cosas cambios, which means, things change. In few places is this more evident than in the South Bay, where the real estate map is perpetually shifting—quickly, in some cases dramatically, and block by block.
0
0
0
Explore Story
While this house was built in 2007, its architecture and interior design clearly references Californian Modernism. It’s one of the reasons why Ron Radziner loves it so much.
0
0
0
Explore Story
To truly appreciate this exceptional island retreat, one with a top 10 swimming pool that soars over the ocean and is accessed by private funicular, one has to experience it.
0
0
0
Explore Story
9318 Nightingale Drive ≫ This Architectural Masterpiece High Atop L.A.’s Bird Streets Checks All the Boxes for Timeless, Sophisticated Living The locale of this award-winning,…
0
0
0