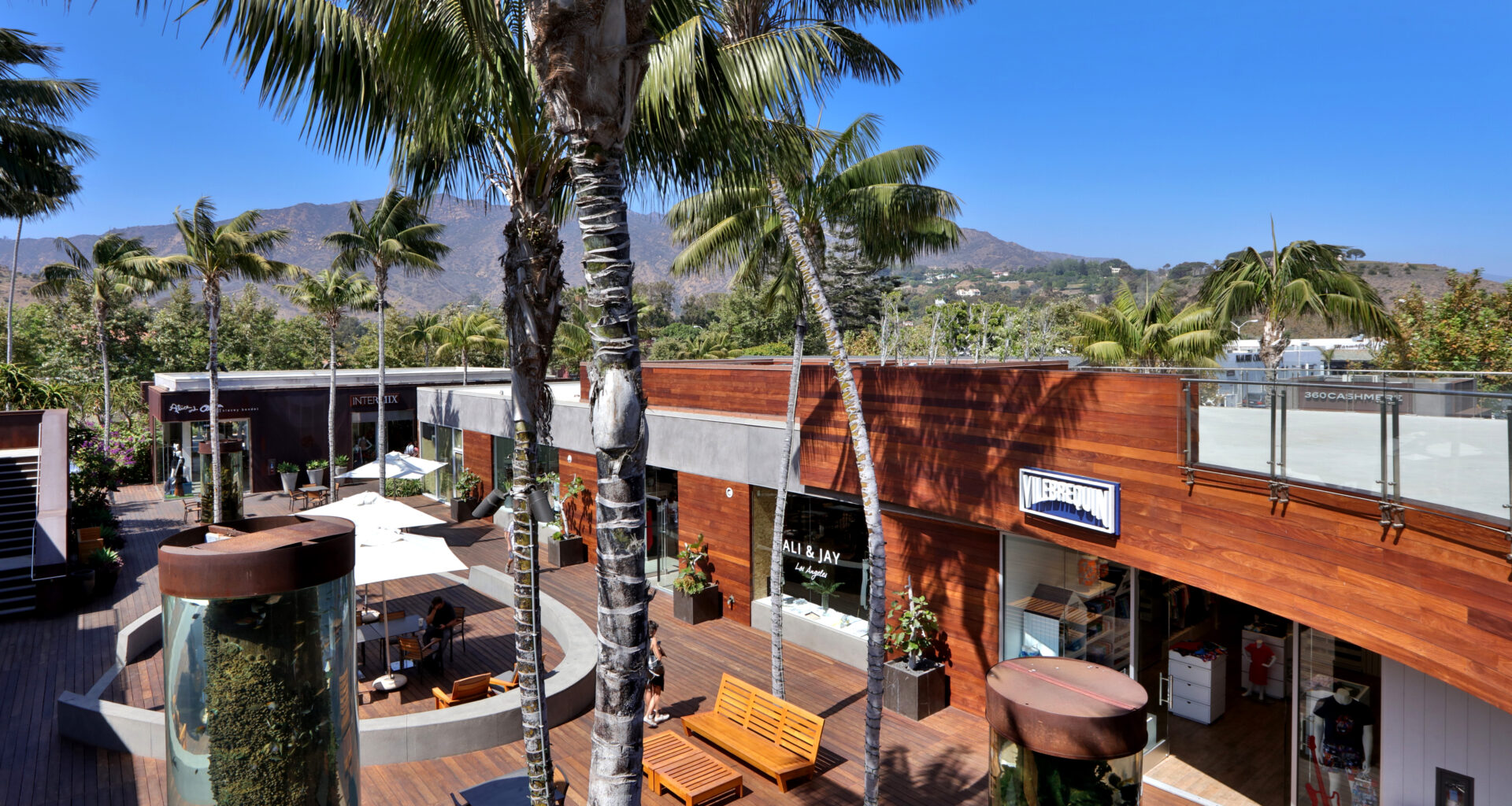 Chances are it’s been a while since you’ve been to the mall.

Indeed, the traditional indoor shopping mall of yore has almost been completely eclipsed in retail circles, overtaken by its modern-day predecessor—the “lifestyle center.” Described by the International Council of Shopping Centers (ICSC) as an outdoor concept featuring “upscale   national-chain specialty stores with dining and entertainment,” lifestyle centers have now become the standard in climate-friendly Southern California. One that stands out for both its eco-minded, elegant design and its place as an incubator for new retail experiences is Malibu Lumber Yard.

Built on the site of what was formerly a hardware store and lumber yard, a longstanding Malibu fixture described by landscape architect Eric Lennox, who was lead designer on the new project, as “a generational, community treasure,” Malibu Lumber Yard was unveiled in 2009 as a tony 30,000-square-foot lifestyle center populated primarily by high-end clothing retailers, including Intermix, Maxfield and Vilebrequin among them. It’s also a marvel of ecological sustainability, from the bevy of reclaimed wood used in its construction to its water-wise selection of plants, which utilize 100 percent reclaimed water for their irrigation.

A stroll along the center’s main deck reveals a Malibu-chic design, from the inviting horseshoe silhouette and plethora of loungers and umbrella-covered sitting areas to tropical plants galore—including lofty Kentia King palms, an overgrown aloe vera plant and batches of exotic succulents in planters. There’s even freestanding circular aquariums filled with colorful Pacific Ocean fish and plant life, a particularly mood-making feature in the evening when interchanging colors cycle through the tanks. “We used the pattern on the deck and the curved wood on the second floor to indirectly attract attention, focus and ‘draw’ people in and give the retailers exposure,” Lennox explains. “Because of the retailers that were being attracted, we wanted to create a resort-like, comfortable feeling in a commercial setting. You can shop, sit and have ice cream, or just come to hang out—very, very comfortably.”

Speaking of shopping, traditional brick and mortar retail has seen better days, particularly in the age of online shopping and the rise of the millennial consumer. According to an Accenture study on the current generation’s consumer behavior: “They have come to expect a seamless shopping experience and won’t hang around if they don’t find it. For retailers, the message is clear: Give them what they want, when they want it or risk losing them.”

This seamlessness has increasingly translated to retailers offering a marketplace experience, where consumers can shop among many brands, products and services at a single site. A thoughtful beta test of this concept can be found at Malibu Lumber Yard this summer in the pop-up shop of Ali & Jay. The dress retailer with a girls-havingfun-in-LA brand personality has opened up a modern-day bazaar in tandem with its sister brand Bailey44.

Though dresses are the core product offering of both labels, they’ve keenly filled the space with a rotating group of brandsimpatico vendors, from t-shirts and sunglasses to candy, bikinis and beach towels. On weekends, the Brentwood outpost of Blo Blow Dry Bar offers braids and beach waves, and there’s makeup and on-the-go skin services by Blushington. There are also flowers and bouquets from Costa Mesa florist Studio La Fleurs, and a steady stream of blogger events and hashtag promotions to encourage customers to publicize the festivities.

In short, the pop-up is offering a comprehensive, centralized and rather glamorous experience that’s unmatchable online. This, plus the chance for visiting consumers to transform themselves head-to-foot into a comely Malibu vision who’s more than ready for their share of Instagram shots and Snapchat sessions. “On the weekends, it’s a one-stop shop. People love it,” says Ali & Jay salesgirl Kelli Lippman.

“It’s been really fantastic,” adds Melanie Bender, Vice President of Marketing for The Bailey Group (parent company of Ali & Jay and Bailey44). “Being able to be in Malibu during summer—it was such a right brand moment for us. What we look to do with the concept is not just create a boutique with fabulous product, but also bring something to the community that we thought would really resonate with the shopper here.”