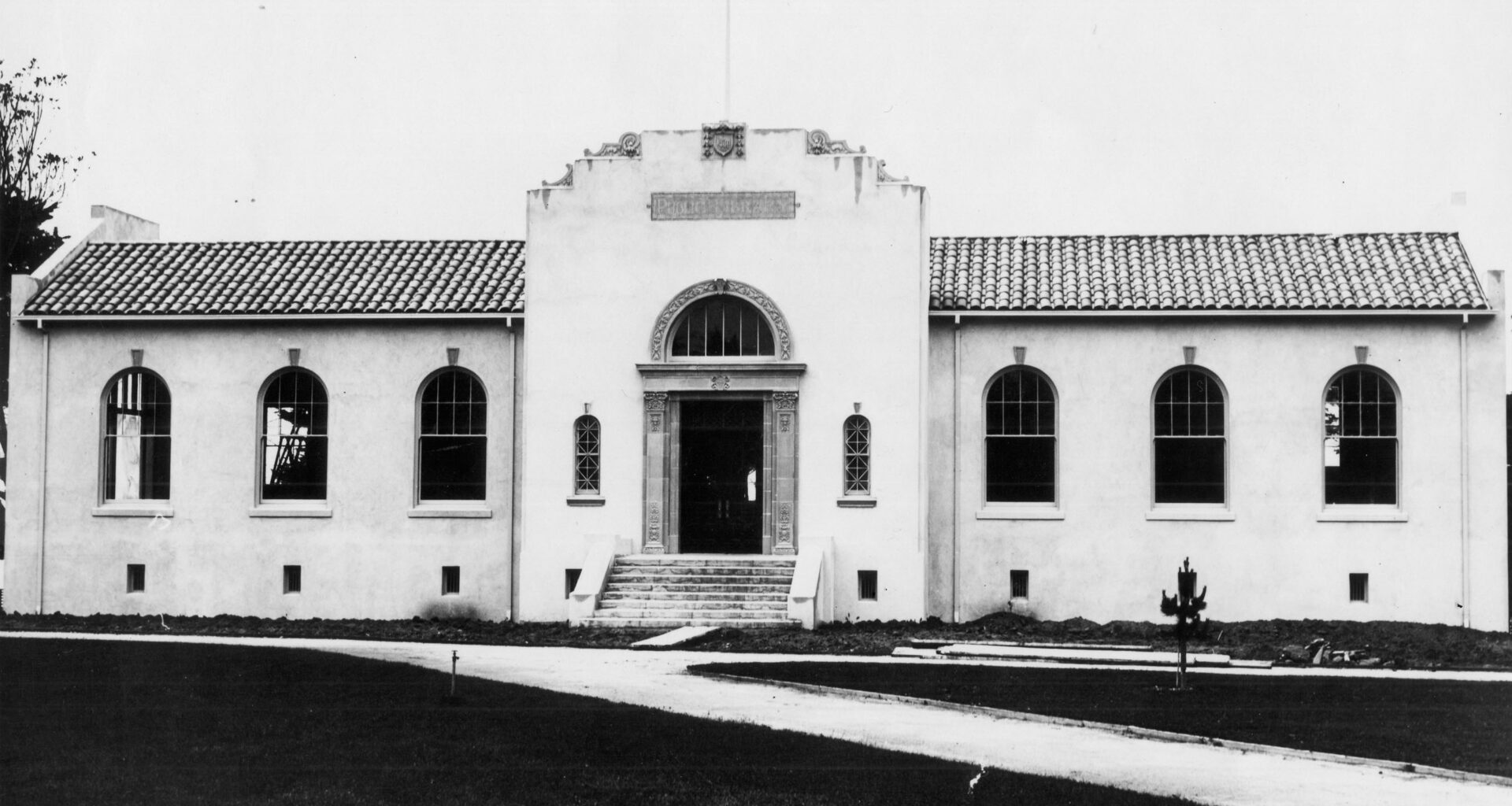 If you had been a local sailor in 1895, at some point you probably would have come across Pier Number One in Redondo Beach. There you would have found a small reading room filled with donated books, allowing an escape from the hardships of sailing life. Although Pier Number One was swept out to sea during a major storm (occurring in either 1907 or 1915, depending on whom you talk to), this modest reading room was the humble beginning of the future Redondo Beach Library.

Redondo Beach’s first free public library opened in 1909 in a room in the City Hall on Emerald Street, and over the next twenty years, the growing library struggled with space problems for its 450 volumes. The library soon became so popular that by 1917 the collection filled the entire west wing of the City Hall. By 1928 there was an unquestionable need for more space, and a new site along the Esplanade was suggested by the Chamber of Commerce.

Designed by architect Lovell Pemberton and built at a cost of $45,000, the new main library in Veterans Park was opened in July of 1930. A three-story building, the library combined both Spanish and Dutch colonial styles with arched windows and gables on its north and south wings. Art Deco moldings decorated the front façade, and windows were set in almost every wall to allow unrestrained views of the bay.

Built just to the right of a Moreton Bay Fig tree which still stands today (and is itself a registered landmark), the library boasted 20,000 volumes and served an appreciative population of 10,000 residents.

During the Depression, the library briefly became part of the Los Angeles County Library System. Staff took voluntary pay cuts, performed janitorial work, and paid the light bill out of their own salaries. In 1937, with better financial times, the library withdrew from the County System, and by 1943 there were more than 32,000 books on the shelves.

“In the late 1940s, there was an area inside the library that allowed children to check out toys,” recalls Patsy Murray, former Redondo Beach resident and now living in Hermosa Beach. “I remember as a young girl walking from Pacific Coast Highway over to the library to borrow toys.”

In later years the library struggled to keep up with population growth and redevelopment.

Although the library’s architecture and beautiful location secured it a place on the National Register of Historic Places in 1981, there were concerns about the building’s age and ability to withstand earthquakes.

After serving as Redondo’s main library for sixty years, the historic library closed in July of 1991. In July of 1993, ground was broken for construction of a permanent library adjacent to City Hall, and two years later the new Redondo Beach Main Library opened at 303 N. Pacific Coast Highway.

As you wander through Veterans Park and admire the library, be sure to stop next to the Moreton Bay Fig tree and gaze toward the pier. It’s easy to imagine those long ago days when sailors pulled up to Pier Number One, eager to sit in the reading room and escape.

Explore Story
In an era where technology is ubiquitous and time spent in front of screens is dramatically increasing, a…
0
0
0
Explore Story
Made in L.A. 2016: a, the, though, only shares a robust collection of new works by local artists…
0
0
0
Explore Story
A close shave, a cigar and the perfect pair of denims— Deep Pocket Jean Company celebrates a timeless male trifecta.
0
0
0

Explore Story
From its inception in 1927, the Academy has had the ambition to create a museum to tell the story of cinema. Starting with just 36 members, the organization today comprises more than 10,000 accomplished individuals working in the industry.
0
0
0