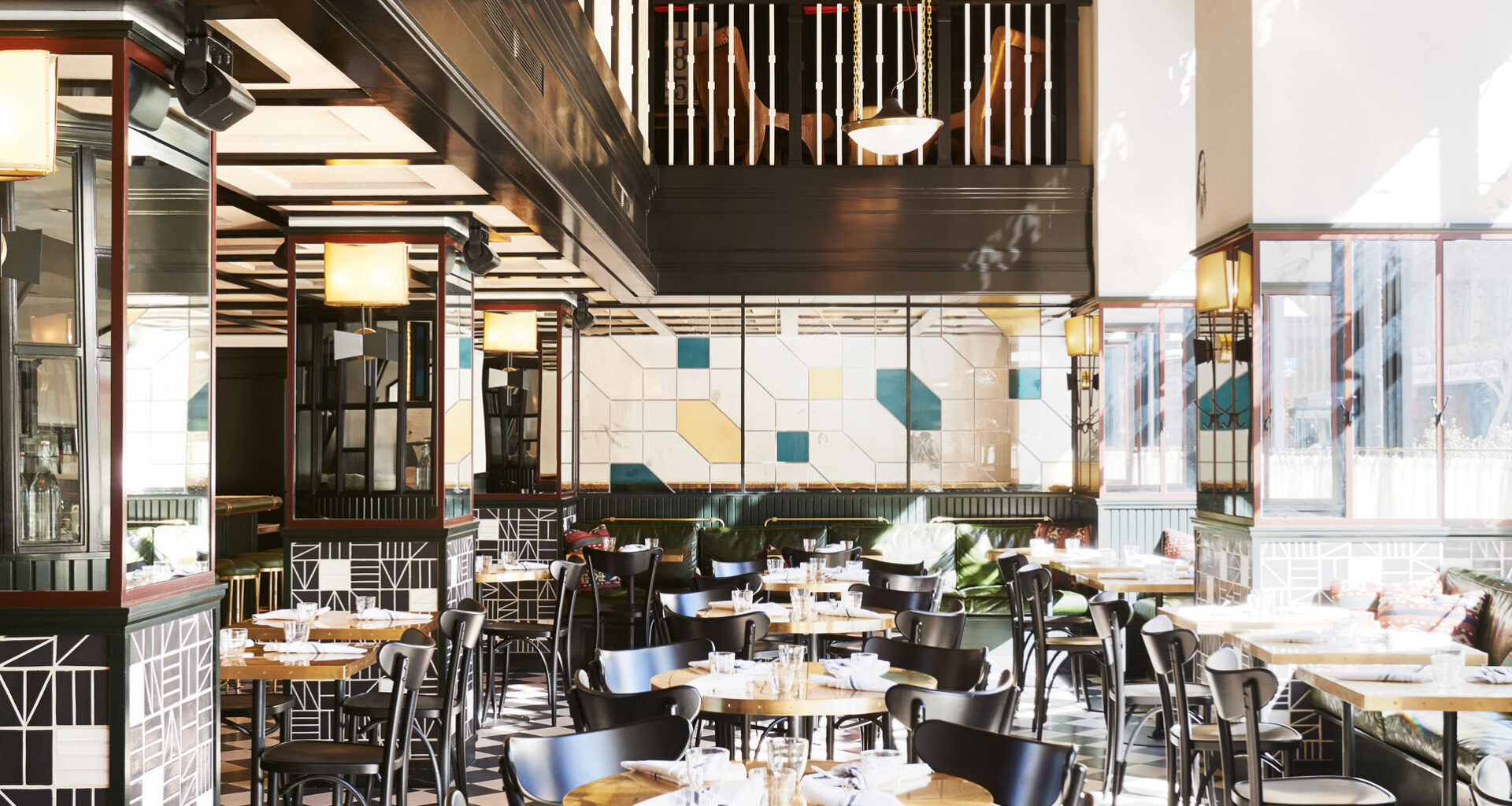 At 929 S. Broadway, Ace Hotel Downtown Los Angeles is a destination in itself. Built in 1927, the 13-story Spanish Gothic building honors its past. Once home to the United Artists Theatre designed by C. Howard Crane, the structure now hosts a stylish hotel, which, since early 2014, has been at the intersection of history and creativity.

Last October, the hotel’s signature restaurant, formerly LA Chapter, opened its doors as Best Girl. Following the rest of the hotel’s lead in historical homages, the eatery takes its name from a silent movie starring Mary Pickford—also the first film screened at the theater 90 years ago. Shaped by Los Angeles-based Commune Design, the 132-seat restaurant still features the same casual, inviting and airy atmosphere that characterized its former occupant.

Furnished with Thonet chairs, soft leather banquettes, and custom, brass-top tables that provide a striking contrast to the black-and-white checkerboard floor and original poured concrete ceilings and columns, the space is reminiscent of a Viennese cafe with a nod to late 1920s-era L.A. design.

The change is in the plates. Well-known for seafood and fine cuisine—with restaurants such as Providence and Connie And Ted’s, and seafood market Cape Seafood and Provisions—renowned chef Michael Cimarusti developed a different approach for Best Girl, focusing on his favorite meals made at home for family and friends. Chilaquiles with scrambled eggs, tortilla chips, queso fresco, cilantro and scallions; a tonkatsu-style chicken sandwich with yuzu kosho mayonnaise, creamy miso cabbage and sesame; calamarata pasta with Calabrian pork ragu and locatelli romano; and rock cod with Saltspring mussels, fennel, orange, olive and grilled bread are some of the dishes that express the variety of L.A. cuisine, drawing influence from Mexican to Japanese to Italian sources and more.

Explore Story
A Venice icon is revamped, with reverence for its original Written by Michelle Lyn | Photography by Pascal…
0
0
0
Explore Story
Pizzana brings together classic Italian pizza-making with local Los Angeles style and flavor for neo-Neapolitan pizzas in a…
0
0
0
Explore Story
The tasting menu at Kato, an understated seafood restaurant in a Santa Monica mini-mall, explodes with innovative and…
0
0
0
Explore Story
Sacks on the Beach is a friendly spot for healthy salads, scrumptious sandwiches, and more. Written by Constance Dunn…
0
0
0