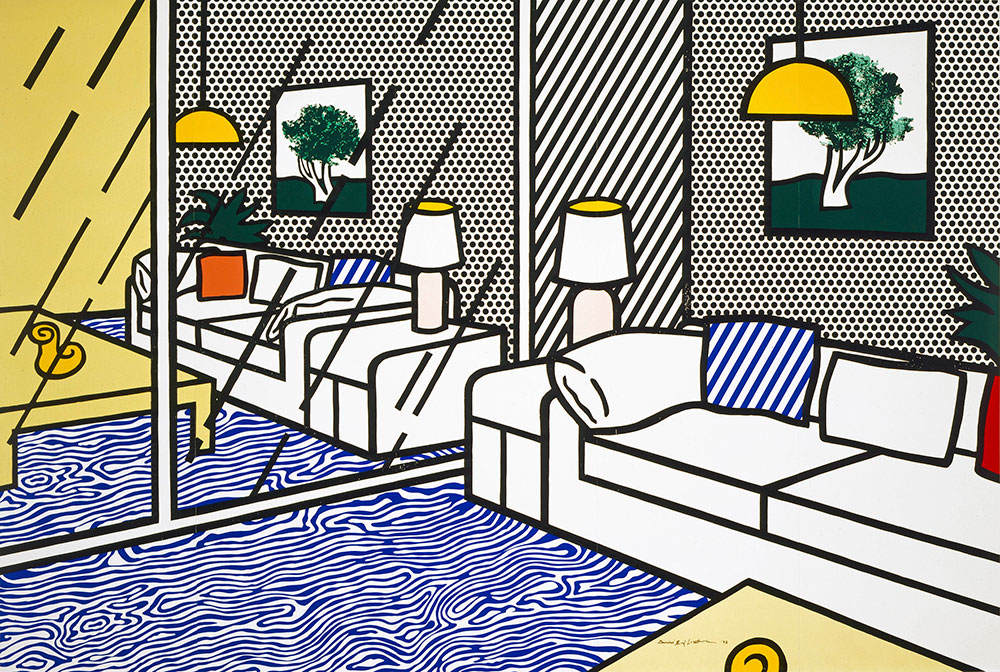 In the early 1960s, New York artist Roy Lichtenstein started making big, bold renderings of comic book scenes, cartoon characters and commercials. Subversive to the mainstream art world, yes, but an effective means to shine a spotlight on shared themes of human experience—love, heroism, longing and more. In essence, his breakout exemplified what Lichtenstein would do for decades to come: forge a meaningful connection between mass-produced imagery and “high art.”

The current retrospective Pop for the People: Roy Lichtenstein in L.A. at Skirball Cultural Center is a focused survey of the artist’s works, and includes everything from massive prints and magazine covers to shopping bags, paper plates and wallpaper. There’s also the recognizable Whaam!, a painting inspired by a 1962 DC Comics issue, and an installation created by Skirball—a full-scale 3D play on Lichtenstein’s 1992 painting Bedroom at Arles, based on the Vincent van Gogh series.

Lichtenstein was prolific, working until his death in 1997. As the title of the exhibit suggests, there’s a focus on his Los Angeles works, including his connection to Gemini G.E.L., an artists’ workshop credited for the technical execution of his fine art prints, thanks to the deftness of the master printers there with whom Lichtenstein collaborated.

Explore Story
As the first condo tower to hit DTLA in almost a decade, the shiny-new, glass-cubed TEN50 is attracting the lion’s share of attention, with more than 50-percent of the boutique high-rise’s 151 residences snapped up since sales began last April.
0
0
0
Explore Story
After over 30 years of living in Los Angeles, brothers Maurice and Paul Marciano—the minds behind iconic fashion…
0
0
0
Explore Story
Satiation by the Sea for Over 40 Years a Tasty Mexican Counter Has Fed Hungry Beach-bound Locals and…
0
0
0
Explore Story
700 Nimes Road by Catherine Opie Although her romantic entanglements made for tabloid fodder, Elizabeth Taylor found a…
0
0
0