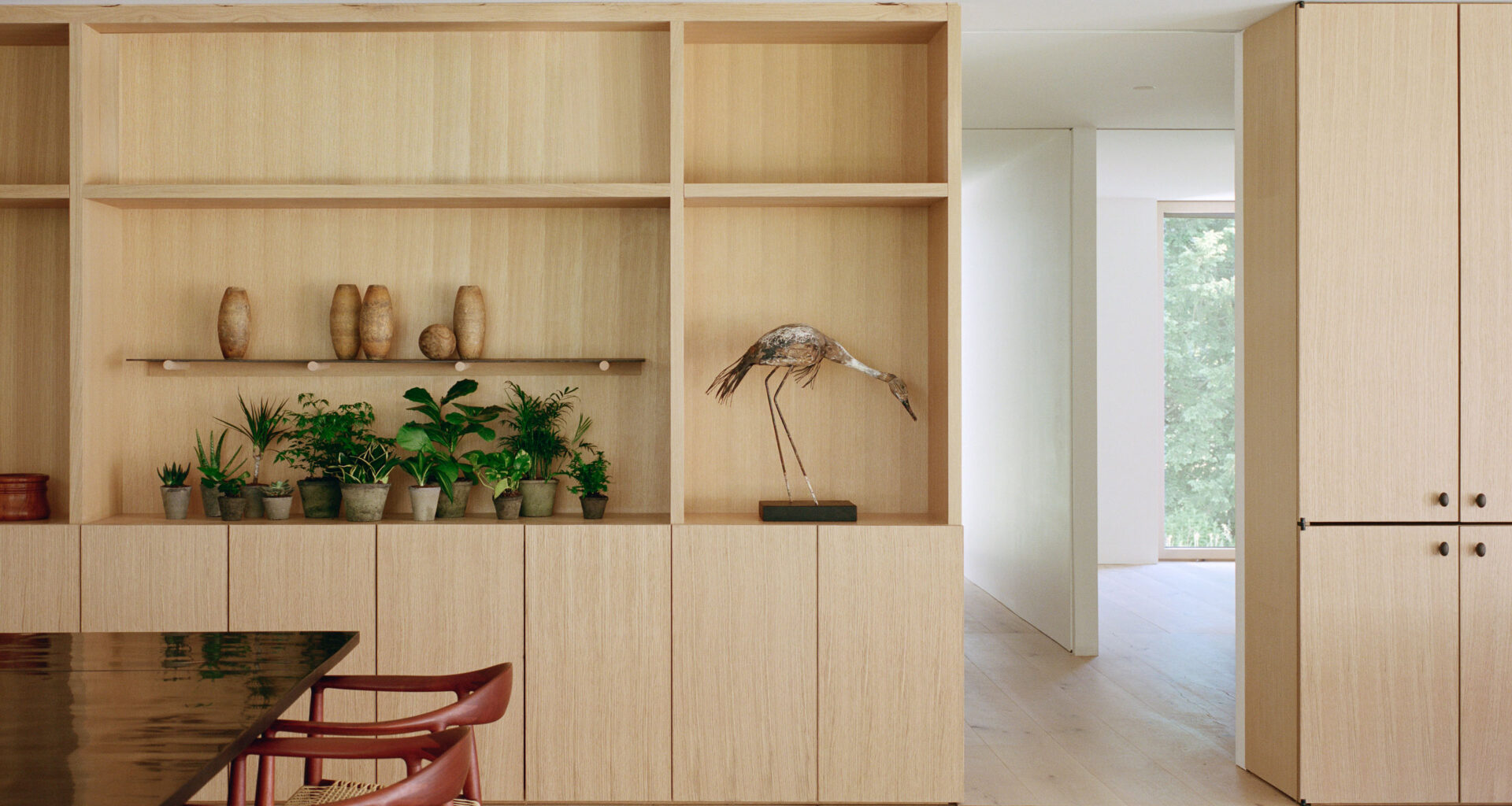 Idyllic and peaceful, the natural landscape on which this 3,600-square-foot contemporary home sits is one of the elements that makes the project unique.
Total
1
Shares
0
0
1

In Sheffield, Massachusetts, This Home Designed by of Possible / Vincent Appel Equally Values Aesthetics and Performance

Built by Kent Hicks Construction and designed by Of Possible / Vincent Appel among active farmland and the rolling forested hills of the Berkshires in Massachusetts, the property is owned by a couple who have spent a lifetime in the food and beverage industries. Both love to cook and entertain—a passion that naturally led to the design of a professional-level kitchen and a passive, ground-coupled root and wine cellar.

“The clients had grown up on the property in an old colonial home rebuilt several times over the years by their parents,” says architect Vincent Appel.

“The original two-story home no longer suited their desire to live actively in their retirement, so it was saved and relocated for their younger sister on a nearby hill. The owners were looking for a new architecture that engaged the memories of the original home on the site from their youth, and that would be suitable for late living life.”

To that end, he adds, “It needed to be primarily one floor…and not draw attention.”

Honoring this brief, Appel created a contemporary house with a nod to the local architectural vernacular. With floor-to-ceiling glass windows, it is surrounded by terraces on three sides that all create outdoor spaces, including the cozy east terrace that has a suspended Gyrofocus fireplace by Dominique Imbert and feels partially enclosed while providing cinematic views. The panorama is what truly inspired and nurtured the project, with an apple orchard, barn, and horse corral to the east; a long yard and gardens to the south; an evergreen and wetland ravine to the north; and a grand maple tree with a 70-foot canopy to the west.

“The home is designed to frame the spaces of memory in the landscape around it,” the architect Vincent Appel confesses.

Preserving the beauty of the site and paying tribute to it was at the heart of every decision. “We were careful to design the home so no tree would have to be disturbed,” Vincent Appel says. “This meant we had to fine-tune the solar exposure of all the windows and overhangs to work with the large nearby tree canopies during different seasons.”

The deep understanding of the local environment, material selection, and the architecture’s connection to the site allowed the project to meet Passive House-level standards for energy consumption.

“For example, the entire south side of the home (with roof overhangs) has a polished concrete floor on an insulated raft foundation that acts as a thermal mass, keeping the interiors warm in the cold winter nights as it dissipates heat it absorbed during the days,” Vincent Appel describes.

“In the summer months, when the sun is much higher and when you want the home to remain cooler, the concrete floor is well shaded, remains slightly cool and, in the evenings, it absorbs excess heat in the house.”

Among the few components that were not sourced locally are the custom insulated window frames, imported from Slovakia with custom glass from France —glass that is among the clearest in the world, which has a unique treatment that controls the amount of solar radiation and heat gain transmitted into the home and released back out.

“At one point during the design process we were even studying the local bee species,” Vincent Appel remembers.

“We designed a custom metal drip edge that separates the bottom of the cedar siding from the plaster soffit ceilings. That drip edge is only 1-inch wide and we perforated it with holes smaller than the local juvenile bees so it would provide ventilation for the roof but not become a home for uninvited guests.”

Placed 17 inches off the ground, the house appears to rest gently on the site. “This height was chosen so the edges of every terrace could be used as seating out onto their adjacent courtyards,” Vincent Appel says.

“The entire home becomes as intimate in scale as a chair.”

Inside a mix of folk art, midcentury and contemporary pieces offer a perfect balance between clean lines and organic curves, including a large flat weave rug by Warp & Weft that anchors the living room; two Harvey Probber side tables found at George Champion Modern Shop in Woodbury, Connecticut; floor-standing decoy birds from the Splendid Peasant’s Folk Art collection; 12 original teak PP501 chairs by Hans Wegner from the 1950s; and 2017 John Birch-designed split bamboo dining table. “The home is like a modest friend that can really party,” Vincent Appel says.

“The project feels humble and familiar but has an atmosphere and mood that moves you. It’s subtle but behaves differently. The spaces can be incredibly tranquil and calm for just one or two people, or they can be the stage for great large gatherings. It’s rare to be able to do a project that is on the one hand so rooted in high-performance sustainability and on the other hand so uncompromisingly about the poetry and performance of spaces.”