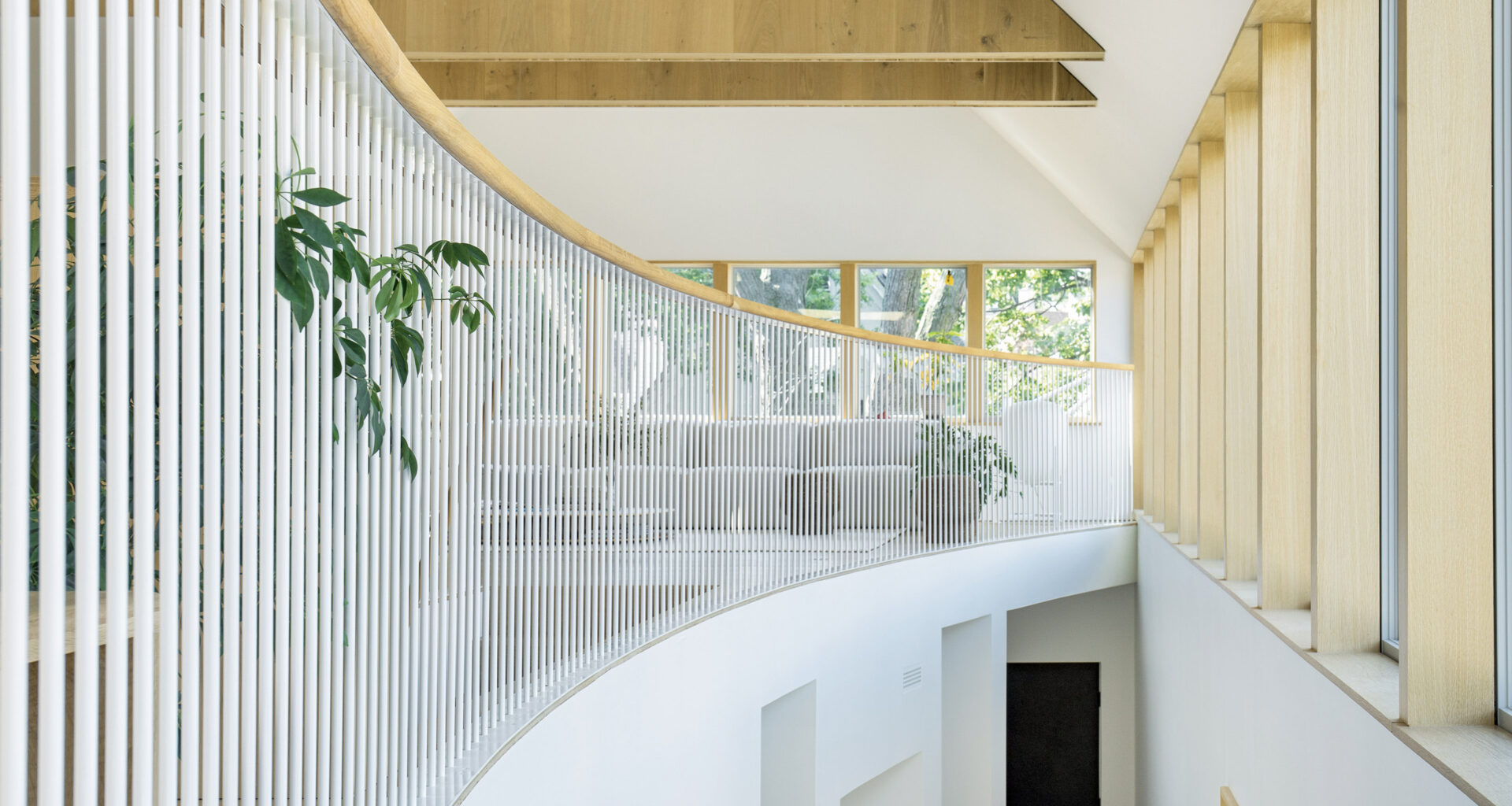 In the Windy City, the birthplace of Chicago School standouts, steel-Aframe constructionists and postwar modernists, even solidly good architecture risks being overlooked amid so much of the truly great. And yet, in the residential space, emergent architecture practice Kwong Von Glinow has turned the current architectural landscape upside down with its prize-winning project Ardmore House.

Bordering an alleyway on a traditional Chicago lot, Kwong Von Glinow’s fresh, grey-scale dual-tone form represents a 3,100-square-foot break with residential norms. Featuring an atypical living arrangement, the house, which was designed to engage with its urban context, has bedrooms on the middle floor and living spaces on the second floor (with utility spaces at ground level). Not an entirely novel concept, but unique in its neighborhood. Fueled by the vision of the architects behind it, Ardmore House is many things—progressive, future-facing, exploratory. It is not, however, a chip off the old block.

Though the duo had previously worked at the international architecture firm Herzog & de Meuron for a combined seven years, they never worked on the same project in the office.

“We knew that we would need to start to create a working relationship between the two of us and at the same time we needed to define our set of values,” she continues.

Thus began the formation of a partnership to watch; in 2017, the inaugural year of their office, they entered several competitions and came away with many wins, including for their innovative exercises in vertical living: the Table Top Apartments and Towers within a Tower.

“What was most meaningful from this time,” Alison Von Glinow notes, “was forming our distinct interests and values in space.” Ardmore House was an opportunity to communicate those ideas and values.

“We placed spatial emphasis on creating a contemporary way of living that values light and air and connection with the surrounding environment while re-thinking the traditional single-family home,” Alison Von Glinow says of the project.

To work within the surrounding neighborhood—a mix of single-family, wood-frame pitch-roofed homes and brick three-flats—the architects used a pitched roof form as a placeholder from the beginning of the design process.

“In the end, it stuck,” Alison Von Glinow explains. “It represents the most primitive form of the home and structures a new interior spatial experience with the trusses lofting the pitched ceiling.”

The trusses are one of the key elements of the design, fortifying the frame and designating five areas set around the curve of the balustrade: the kitchen, the island, the dining room, the powder room, and the living room.

“We were really excited about the idea of trusses and saw the opportunity to clad them as solid monolithic surfaces so that they might act more clearly as spatial dividers while still maintaining an open plan,” Alison Von Glinow notes.

In between each of the two sets of trusses, the architects also installed skylights to reinforce the idea of different spaces by creating different light atmospheres. The double-height courtyard atrium, with a large picture window and curving wall, is another of the home’s defining features.

Together, the trusses and atrium are “two of our favorite aspects of the home,” Alison Von Glinow concedes.

Balancing the relationship between privacy and exposure is another ingenious stroke of the design. The second-floor railing that lines the interior courtyard is a good interior example of how this idea plays out.

“Standing on the second floor, the closest anyone can come to the western alleyway facade is to lean against the railing. It moves from directly against the facade at the two ends of the home to 6-feet from the facade at the center of the home,” Alison Von Glinow explains. “This railing acts as a means of privacy from street level.  Occupants are pushed back from being directly visible from sidewalk and alleyway views.  However, directly across the alley are the porches and egress stairs of several apartment buildings.”

The railing internalizes and mirrors a similar ‘deck’—though interior—experience. When neighbors are on their outdoor deck, they can see into Ardmore House and, rather than the ‘front porch’ neighborly wave, the residents have an internal-to-external connection that is special and more unique.”

While the home’s two-tone wood-cladding exterior (its materials chosen to “emphasize the sectional flip and lend visual rhythm to the monolithic building,” notes Alison Von Glinow) makes a bold statement, the interior is clean, quiet, and disciplined in color and materials alike, from white walls to white oak wood floors, trusses, and furnishings.

Ribbon windows running the length of the interior courtyard, meanwhile, accentuate two core elements of the project: ample natural light and views that capture the fullness of the neighborhood: its century-old trees, streetlamps, and the back balconies and fire-escapes of nearby buildings. In pushing the built envelope of this project, Kwong Von Glinow did more than flip its domestic program. They flipped the script.

Explore Story
In January 1945, Los Angeles publication Arts + Architecture announced the Case Study House program, with the goal to create and promote cutting-edge—and accessible—home design models in anticipation of returning American G.I.s, and with them, the need for good residential housing that could be produced on a mass scale.
0
0
3
Explore Story
A testament to pastoral beauty and American progress, Shelburne Farms is a grand 19th century estate built with…
0
0
0
Explore Story
Debuting this summer, a new upscale townhouse project will elevate boutique living in the heart of Redondo Beach…
0
0
0
Explore Story
The addresses north of Sunset, that wind up through the Santa Monica Mountains, are considered the most prestigious. Take the rim side of one of those prestigious streets, where on a large lot this stately Spanish Revival strikes a remarkable profile, unfolding sweeping views of the ocean from its back terrace.
0
0
0