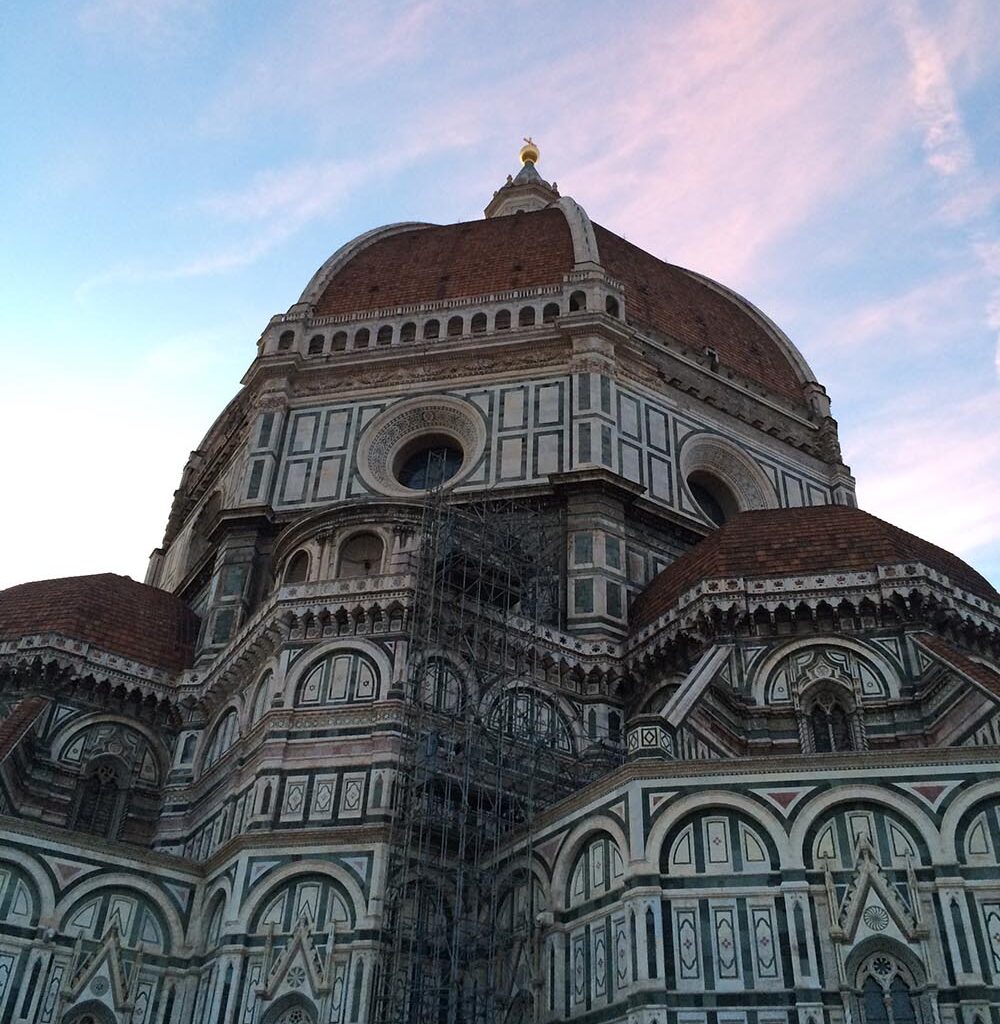 From ancient structures to sumptuous meals, Italy awakens all the senses in two of its finest cities

Accordion music floats through the air, golden light bathes cobblestone streets, and the faint scent of basil teases the palate. It’s unmistakable—you’re in Italy. A country with perhaps more devotion to pleasure than any other, any time spent in the boot is a feast for the senses. Besides the obvious culinary delights, the aesthetics of Italy have singular appeal. Modernity is not prized here; rather, a reverence for the ancient is apparent in each building. Italian culture values beauty above all else, an ideology that manifests everywhere, from the architecture to the locals themselves. The Renaissance city, Florence, is perhaps best known for Brunelleschi’s masterpiece: the Cattedrale di Santa Maria del Fiore, more commonly known as the Duomo.

The church’s face is a dizzying puzzle of pink, green and white marble intertwined around ornate statues and engravings surrounding massive wooden doors. And, of course, the most striking feature: the massive dome itself, equally impressive from the inside as out, with a painting to rival the Sistine Chapel adorning its ceiling. The Basilica di Santa Croce is another of Brunelleschi’s creations, a slightly smaller pink and green confection of a church presiding over an expansive square. Dine at Finisterrae for quality food with a view—be sure to nab a table outside in the piazza, and try the pesto potato lasagna. When crossing the Arno River, stroll by the Galleria degli Uffizi, a stately museum hosting some of the world’s best art. With statues of greats such as Dante and DaVinci outside in the niches below the porticos, it’s hard to believe these hallowed halls were once simply office space (“uffizi” literally translates to offices).

Across the river in the Oltrarno neighborhood, architecture ranges from the imposing Palazzo Pitti to the simply rustic Basilica di Santo Spirito. One of Florence’s most charming and least tourist-filled main squares, Piazza Santo Spirito hosts both its namesake—an understated white church—and bustling restaurants and bars. Filled with local musicians, families and young people, visitors and locals alike enjoy pasta at Tamerò or Osteria Santo Spirito. Or, simply grab a seat on the church steps or fountain to eat pizza “porta via” (takeaway) from Gusta Pizza. Just down the street, in tiny Piazza della Passera, lies the equally enticing Quattro Leoni, a can’t-miss restaurant where the pear and pecorino ravioli will fuel your dreams for weeks to come.

Cap it off with a gelato at Gelateria della Passera, a hole-in-the-wall that’s easy to overlook but never forgotten once tried. A quick high-speed train ride away, the sprawling city of Rome is home to equally entrancing architecture that’s even a touch more ancient. The city’s crown jewel, so to speak, is the Colosseum, and it’s every bit as grand as you’d imagine—strolling by at night offers the best view of its quiet majesty while lit up. Around the corner is the Monumento Nazionale a Vittorio Emanuele, a polarizing structure alternately loved and hated by Romans.

Colloquially called the Wedding Cake or the Typewriter, the massive white structure perched above the Forum is a departure from the archetypal ruins of the city. In its center is the Pantheon, an incredible feat by Hadrian with a perfect sphere as the dome. Stand beneath the oculus for a moment of wonder at the ancient accomplishment.

To enjoy the burnt-orange buildings and flower-draped terraces typical of Roman architecture, the Trastevere neighborhood is one of the most charming. Caffe delle Arance in Piazza di Santa Maria is a perfect place to enjoy the typical Italian pre-dinner drink Aperol spritz, served with complimentary aperitivo snacks. Farther back in Trastevere, Roma Sparita is famous for its cacio e pepe, a Roman pasta specialty, served here in a bowl made of cheese on blue and white checked table clothes. Or, stroll through Campo de’ Fiori for a scenic detour on your way to Trattoria da Teo for family-style service. Equally appealing to each sense, Italy is made for indulging. From the architectural wonders around each corner to meals that also feel like art, the country is enriching in every sense of the word. Italy is made for indulging.

FROM THE ARCHITECTURAL WONDERS AROUND EACH CORNER TO MEALS THAT ALSO FEEL LIKE ART, THE COUNTRY IS ENRICHING IN EVERY SENSE OF THE WORD.

Explore Story
After three decades in the industry, and a spectrum of design projects, renowned firm Yabu Pushelberg is an…
1
0
0

Explore Story
Overlooking the hypnotic depths of the Adriatic, the remnants of an ancient time speak to an ancient place. This is Lopud 1483, a 15th-century Franciscan monastery complex, with its church, Our Lady of the Cave, so named for the fact that the friary was built over a sea cave that was later transformed into an underground passage connecting it with the open ocean.
0
0
0
Explore Story
South Bay Digs was granted an exclusive interview with Kappe in 2015, who shared his thoughts on everything from environmentally friendly design to the unique challenges Southern California’s urban landscape poses to architects today.
0
0
0
Explore Story
The Hanalei district in the North Shore of Kauai is home to epic natural beauty and some of…
0
0
0