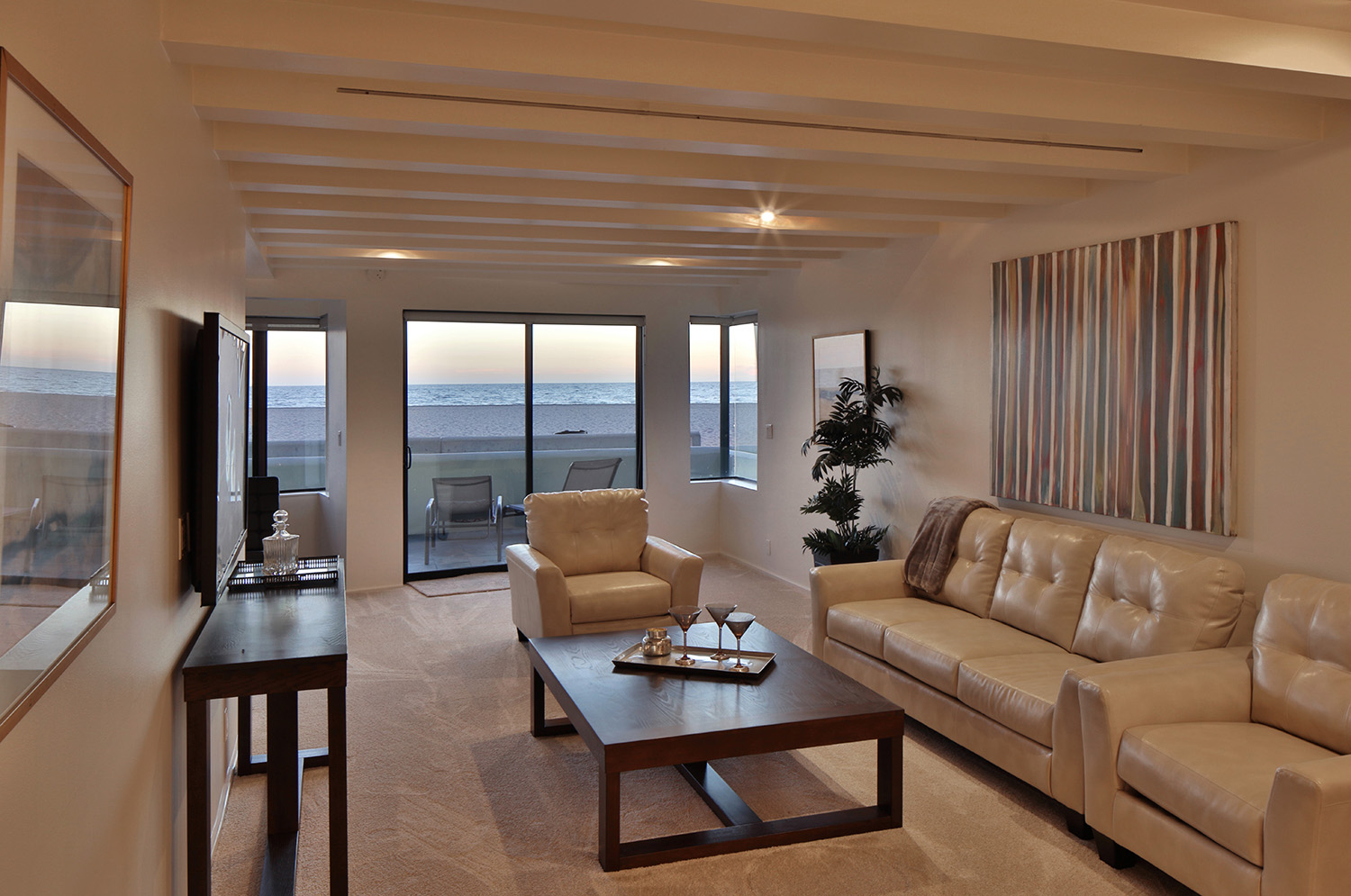 At three stories, the sand-hued residence that sits along North Hermosa’s Strand makes a fitting companion to the premium collection of high-style residences that lines this peaceful stretch of beachfront. Step inside, walk from top to bottom, and you might find it to be a place of beautiful contradictions. Rooms and forms are angular, geometric and even industrial, but the atmosphere is persistently soft and sunny. “Smooth” and “streamlined” are adjectives one might use to describe the home, but look again: curves and texture are everywhere.

All these themes all co-exist within the walls of the home, and any blatant juxtapositions have been blended away under the skillful direction of Playa del Rey architect Mark Appel, who designed it for two East Coast musicians back in 1990. Today, 25 years after its completion, the home remains seamlessly fresh and current.

From New York, With Love

“We wholeheartedly embraced the contemporary design,” recalls homeowner Elizabeth Myers. “We had come from New York, and we wanted this to be a loft by the sea.”

The musician and composer, along with her husband and frequent collaborator, John Trivers, also a successful songwriter and musician, had moved west wanting to retain a bit of their East Coast city style in the design of their new California beach pad. Myers fondly describes their previous Manhattan home—an industrial loft located on the 7th floor of a turn-of-the-century sewing machine factory. The place was marked by open spaces, hardwood floors and authentic Industrial Age details, like a key-operated elevator that opened directly into their living space.

Some of these beloved details would be transposed to their luxurious Strand house. (Back in New York, the loft would eventually be sublet to former Rolling Stones guitarist Mick Taylor and his then-wife Valerie.) “That’s why we exposed the I beams and painted them primer red,” explains Myers. “We wanted everything just to be as open as it could be, so we went with larger rooms and fewer of them.”

There are just three bedrooms in the 2,747-square-foot home, but each is distinctive in its details, and spaced well apart from the others. The master occupies the top floor, and is home to a big balcony—pleasingly private due to its high placement—that runs the entire length of the home’s Strand-facing frontage. Keen industrial touches are found in the gleaming subway tiles in the bathroom, and an exposed chimney flue. The stout, round fixture is exposed and painted red, clearly made to be decorative while serving as a subtle interruption to the room’s linear, horizontal emphasis, which has been formed in large part by a white, box-beam ceiling and rectangular windows that are cleanly framed in black.

Another bedroom, originally conceived as Myers’ music room, and designed around her grand piano, is an inspired place with mitered windows at its corner, revealing ocean views despite it being located away from the front of the home. “I would sit here,” says Myers, gesturing where her piano stood, and perhaps where she and Trivers wrote some of their award-winning compositions, “and look at the ocean.”

Much of the home’s dynamic energy springs from its freewheeling articulation of space. The middle floor spans the kitchen, dining and living areas—designed as an open plan before the idea became wholesale—where blondish wood floors are met with exposed, steel structural beams. Light comes in through Strand-facing glass, floor to ceiling, but it also seeps in softly via a curved wall of glass blocks in the foyer. A delightful and uncommon detail that’s a trademark in Art Moderne homes (a Modernistic residential style, circa 1930), the glass  blocks are a visually elegant feature that, on a practical level, are effective at directing and diffusing sunlight while obscuring views into a home from the outdoors.

Nowhere is the luxurious use of space more evident than in the two-story atrium, which cuts from the foyer to the airy second-floor landing, a peaceful and sun-drenched area laughingly referred to as “a wonderful waste of space” by Myers. “We wanted to bring light into the center, so we had these custom skylights built,” she says. The skylights, though, are vast enough to characterize this feature as a glass ceiling. Like the bulk of the home’s windows and doors, this feature is also framed in black, creating a strong contrast against the white walls and blue sky.

“We went with this strong outlining, almost like a Mondrian painting,” notes Myers, who credits the emphasis on rectangular forms throughout the home, and its vivid palate—white, with red and black accents— as “an intentional color scheme,” inspired in part by the Dutch artist’s 20th-century grid paintings.

At Home With a Peaceful Feeling

The home’s address—3320 The Strand—puts it in the midst of a particularly high-desire stretch of North Hermosa beachfront. Once site of an unsuccessful literary colony of the early 1900s called Shakespeare’s Beach, these days the neighborhood is praised for the fact that its homes jut out further on the sand than their other Strand brethren. This, its convenient mid-point location— between the downtown areas of both Manhattan Beach and Hermosa Beach—as well as its wide streets and generous bike paths, are among its top draws.

In short, there’s more breathing room. “There’s a setback from the street, so you can clearly park your car in front of the garage,” points out Myers, adding that the extra pavement brings the home’s parking spaces to four. These and other details of its surroundings were carefully calculated into the design of the home, built to frame the sensory experience of oceanfront living, down to the subtle, south-facing orientation of its floor-plan, which favors direct views of a beachfront vista that stretches from Malibu to Catalina.

“I think people are a little nervous about ‘Contemporary’ design,” remarks Myers. For some, the designation might offer up a vision of a cold and stark space. But it’s an impression that’s completely at odds with the warm calm that one feels in this residence— a feeling that Myers cites as one of her favorite things about the home she has lived in for so many years. “It’s a kind of calmness,” she remarks. “It doesn’t overwhelm you. It’s really peaceful.”

Explore Story
For the owners of this sunny modern farmhouse, discovering their family’s new home last year was simple, but the goal was a bit more complicated: finding a place in Palos Verdes closer to where the children attended school. This condition upped the stakes for a search that did not prove insurmountable.
0
0
0
Explore Story
Real estate veteran Alexander Koustas spearheads The Agency’s new Commercial Advisory Board Written by Wendy Bowman When the…
0
0
0
Explore Story
NBA star Blake Griffin has listed his mansion in the exclusive Palisades Riviera area of Pacific Palisades for $10.995…
0
0
0
Explore Story
Interior designer, Kelly Hoppen saw her future home and channeled over a year’s worth of work into transforming the 7,000-square-foot space into what now is a showcase of her signatures.
0
0
1