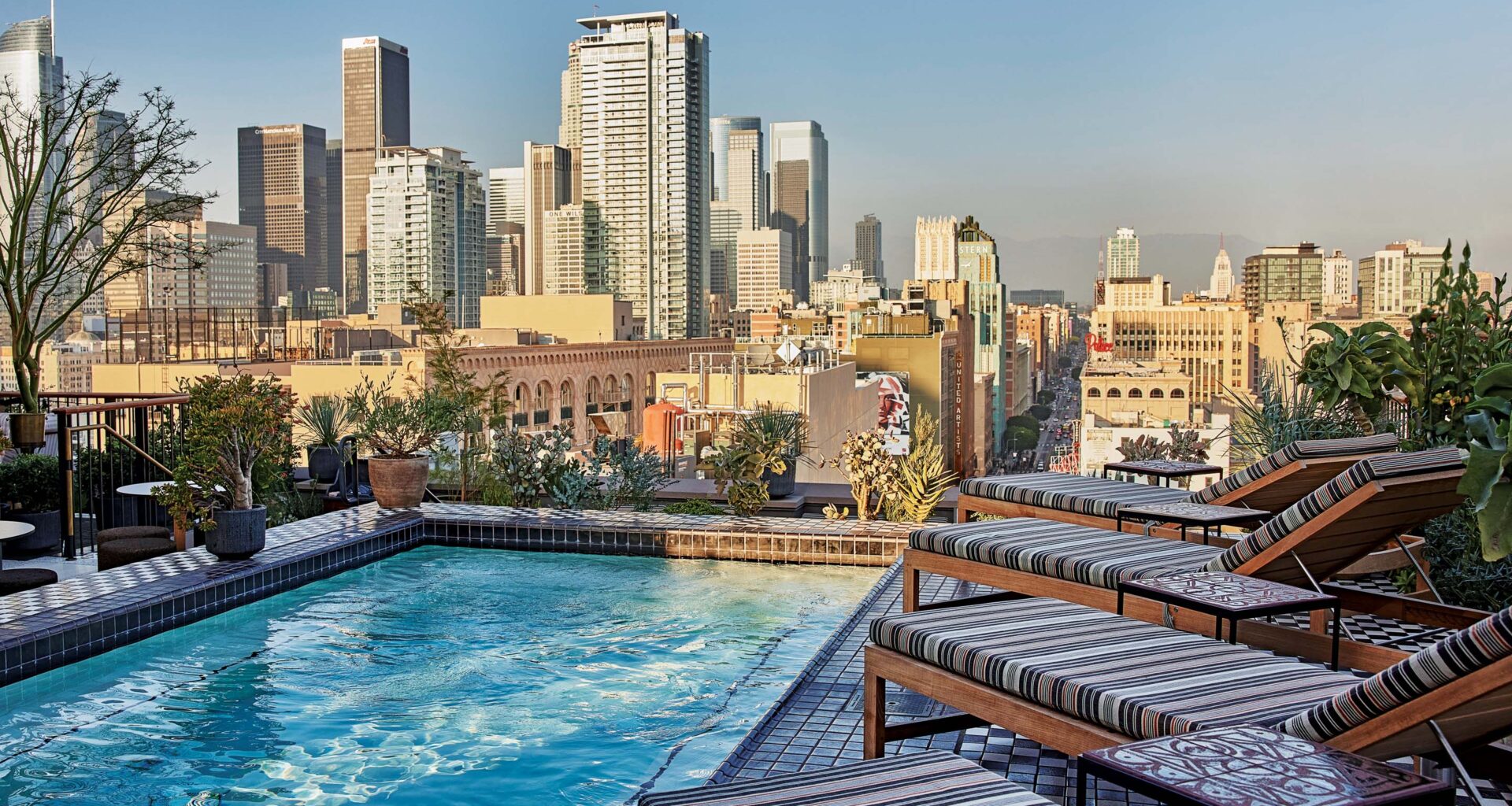 Characterized by their residential feel and filled with natural light, the 148 rooms and suites of Downtown LA Proper Hotel feature vintage and custom-made pieces of furniture and hand-applied plaster detailing in an atmosphere where a warm palette of charcoals and mauves prevails.
Total
0
Shares
0
0
0

In Downtown Los Angeles, Star Designer Kelly Wearstler Has Transformed a Historic Building Into a Trendy Hotel Filled With Pattern and Color

In the heart of the South Park district, what was a private club in the 1920s followed by a YWCA in the 1960s has just begun a new phase. Originally designed by renowned architects Curlett and Beelman, the iconic California renaissance revival building is now home to Downtown LA Proper Hotel.

Its historic character was preserved during the renovation and now combines with an eye-catching look created by Kelly Wearstler. Mastering the art of mixing and matching, the designer blends past and present in all the spaces, which are adorned with local art and vintage references.

“The design of the hotel was greatly inspired by the community—early California, Spanish missions, and the Los Angeles Herald-Examiner building across the street,” says Kelly Wearstler.

“The building is also a Historic-Cultural Monument, so we maintained some of the original integrity and fabric, like the window casing and brickwork, while elevating it with contemporary jewel tones, patterns, and plasterwork.”

More than 100 different kinds of tile were used throughout, as well as site-specific murals and installations by stained glass experts from Judson Studios and ceramicist Morgan Peck, among others.

Patterns, textiles, and colors also embellish the public areas, including the restaurants led by James Beard Award-winning Los Angeles chef Suzanne Goin and restaurateur Caroline Styne that are a feast for the eyes.

On the lobby level, Caldo Verde honors Portuguese and Spanish cuisine with a Southern California twist. At the rooftop restaurant and lounge, diners enjoy unobstructed city views while savoring dishes inspired by sunny coasts around the world. Set to open soon, Dalia will be an intimate classic cocktail lounge and bar.

Offering visual surprises in every nook, Downtown Los Angeles Proper Hotel is the new hot spot that cannot be missed.

Explore Story
Bill Graham and the Rock & Roll Revolution More than 400 objects comprise this compelling retrospective of a major…
0
0
0
Explore Story
A culinary melting pot, Maru’s menu appeals to every palate Written by Michelle Lyn | Photos Courtesy of…
0
0
0
Explore Story
A Trio of Roman Restaurateurs Brings Authentic Italian Cuisine to Riviera Village With Bottega Romana Compared to other…
0
0
0
Explore Story
In 2005, Tamsin Lonsdale was preparing dinner for 20 at her family home in South Kensington, London—an auspicious beginning for The Supper Club, the cosmopolitan, salon-inspired side project she launched while juggling a jet-setting career as a fashion stylist for Italian Vogue.
0
0
0