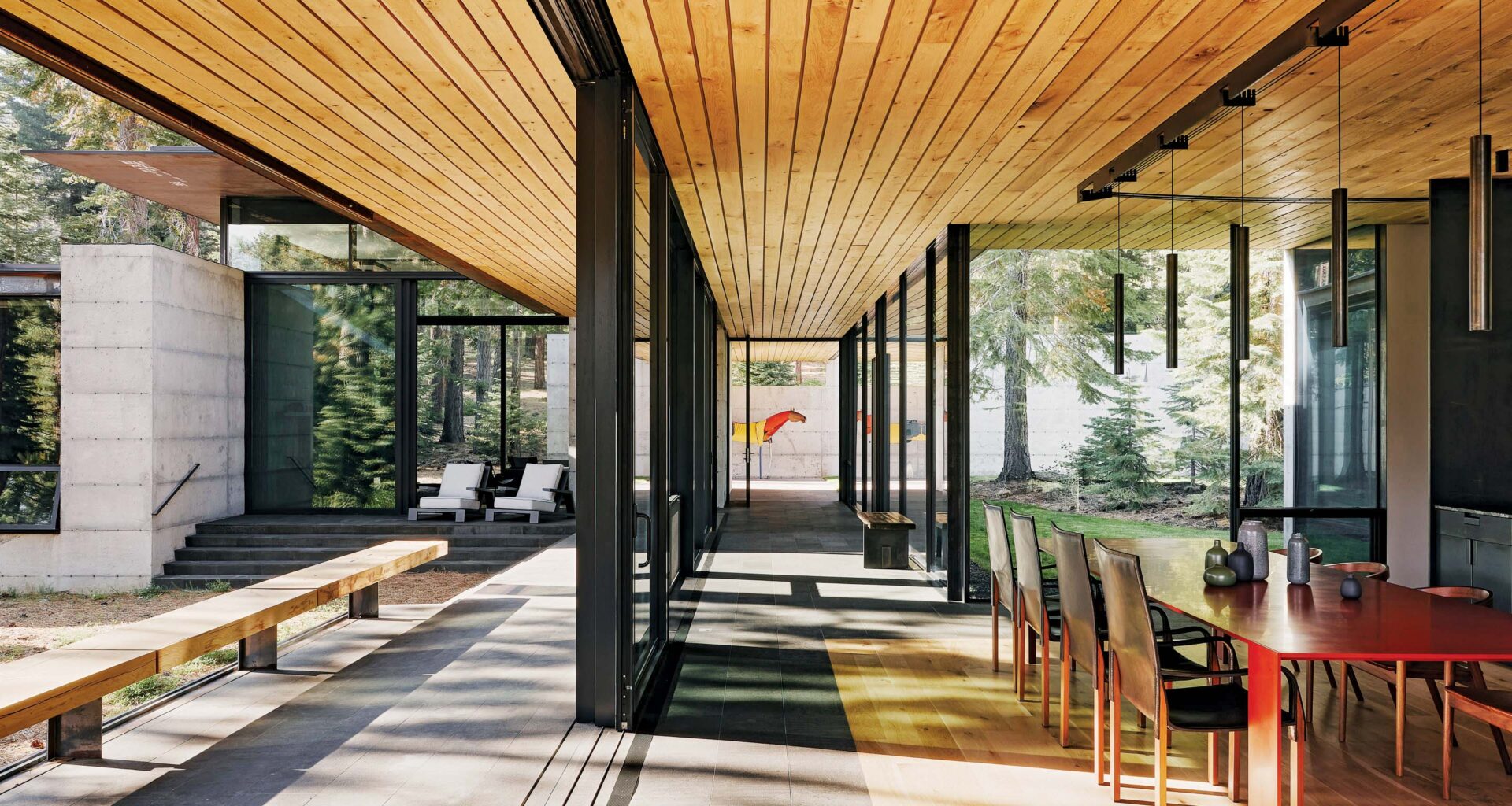 Among the Pines: Olson Kundig

A stunning residential showpiece designed by Tom Kundig FAIA, RIBA from Olson Kundig architecture firm and with fellow architect Greg Faulkner in the mountain town of Truckee, California. This project draws its inspiration from the location’s Ponderosa pines and uses light to create a unique experience.
Total
0
Shares
0
0
0

Further distinguishing the house is the blue-ribbon hand behind it, Tom Kundig FAIA, RIBA. Principal and founder of the prolific and prize-collecting architecture firm Olson Kundig, with offices in Seattle and New York City, Kundig has designed many radiant, elemental residences, but this one, designed in collaboration with the client and his fellow fine-eyed architect Greg Faulkner, was particularly satisfying.

Yet even an architect as accomplished and routinely honored as Kundig admits to some degree of curiosity about collaborating with a contemporary. Would it be a clash or a camaraderie of visions?

“I knew who Greg was before the project began, so I definitely had a sense of, well, this is going to be interesting!” admits Kundig, noting that Faulkner and his wife Lesa were drawn to something in the DNA of his work, as well as his take on architecture, and wanted those elements reflected in their home.

“Components like using and shaping steel plates and details, kinetic or gizmo designs, as well as the tension between the raw and the refined, all seemed to resonate on a deep level.” So while being “under the scrutiny of a terrific architect who’s been delivering great work is no small task,” he adds, pragmatism prevailed.

“Greg and I are both old enough to be mature and confident in our voices and ability to collaborate as designers,” Kundig concedes. “But I was nervous, too.”

Nerves did not get the better of Kundig; they did, however, draw out his best. Analog House is a spectacular house—an architect’s house. The architecture is also a strong response to the landscape.

“This house has been shaped both functionally and poetically by the mature Ponderosa pine trees that occupy the site,” Kundig notes. “In the same way that you would weave through the trees on a forest walk, this home changes direction to respect and make way for the trees. I remember walking onto the site for the first time and hearing Greg and Lesa describe the house as a journey through the forest, in order to preserve the magnificent trees, and I totally agreed.”

As the basis of all great architecture, light—in this instance filtered through the forest canopy and distributed across the site—is fundamental to the project.

“The different light sources—reflected off the snow, against the forest floor, through the needles on the trees—all conspire to make the experience of the house,” Kundig continues. “It’s all idiosyncratic to what’s happening in context to the place.” It is a project that, as the architect affirms, “could only be built in this spot.”

With the site’s Ponderosa pines central to the story of the project, the home’s three-story steel tower riffs on a traditional treehouse.

“The site is very different than our typical projects, where there’s a big, outstanding view that becomes an obvious gesture of the house,” Kundig explains. Without spectacle, “the tower is meant to provide that bird’s nest experience.”

Bold and swaggering, the architecture-defining element rises above the main volume of the home and supplies bedrooms and attached baths for guests. Its rooftop deck, meanwhile, offers views to the coveted ski resort Northstar. While solid steel cladding cloaks the tower’s street-facing north side in privacy, its transparent sides are shielded by tree cover year-round.

Consisting of cement, steel, and glass, the house overall is a kind of sieve: for forest views and, again, all that heavenly-looking light, which calls attention to what is a pristine architectural canvas featuring, among other elegant and understated details, wood paneling and a steel mesh stair wall that lends texture to the interior. At the same time, elements such as cantilevered overhangs help connect the inside of the house to its more rugged environ.

“Truckee is,” after all, “a place of fantastic nature,” says Kundig, who catered to the family’s active lifestyle by creating opportunities to experience and interact with the site.

“Extensive transparency and clerestory windows throughout the house provide access to views and daylight,” he points out, “while the indoor/outdoor connections form links to the natural environment.”

Challenged by nature to “lean into the soft, peaceful moments and create spaces that are deferential to their surroundings, it’s these quiet and intimate micro-views that become more important to the experience of a place,” Kundig observes. “It’s not just about the prospect—it’s also about the refuge.”

The project in broad terms is about exchange, between environments and alliances.

“From my perspective,” Kundig says of collaborating with Faulkner, “once the work began, there was an immediate understanding between us, like designing in conversation—and probably one of the most satisfying architectural conversations I’ve personally been involved with. It felt like we were colleagues.”

The work speaks for itself.

Explore Story
Created for filmmaker John Whitney in 1978 by Pritzker Prize-winning L.A. architect Frank Gehry—known for his bold,…
1
0
1
Explore Story
1615 Blue Jay Way commands views of the city and a choice locale near the Sunset Strip— just a few reasons why this newly built tri-level residence in the Hollywood Hills is an ultra-hot commodity offered by Drew Fenton of Hilton & Hyland and Jade Mills of Coldwell Banker.
0
0
0
Explore Story
ell-known in Venice circles as “The California Poppy House” due to the exterior’s eye-catching silhouette of the state flower etched into a second-floor aluminum screen and bright-red accents on the bottom level, this timeless yet modern gem at 732 Brooks Ave.
6
0
0
Explore Story
Architect Richard Neutra was known for his laser-like focus on the wants of his clients, and faithfully integrating them into his designs. Kaufmann House in Palm Springs was no different.
1
0
10