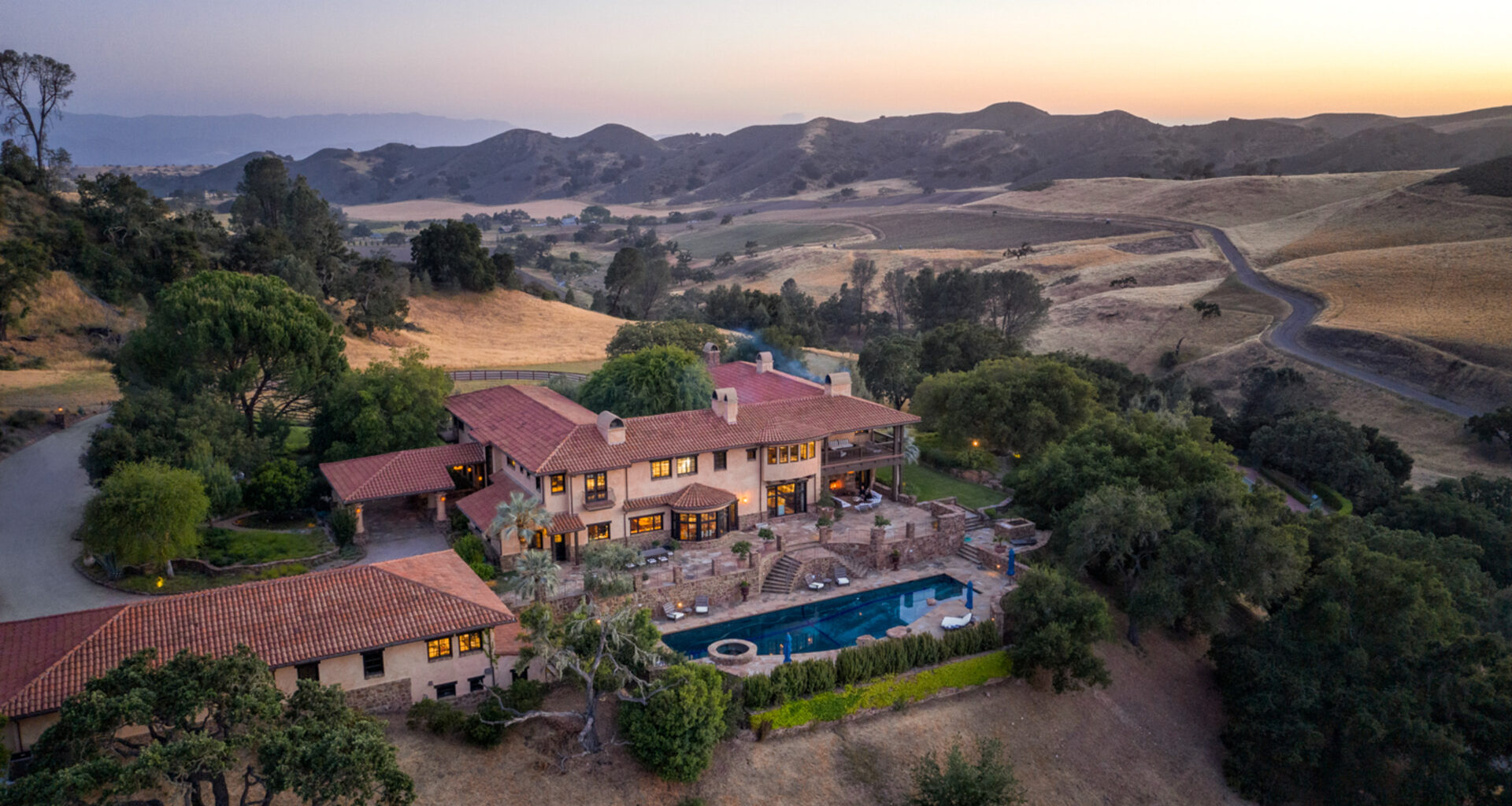 Offered by Neyshia Go & Aaron Kirman of the Aaron Kirman Group at Compass, known as “Rancho Latigo,” the estate previously listed for $45 million in 2017 now is a veritable bargain at $24.5 million with the large scale of the land, masterfully crafted home and picturesque setting abutting the Los Padres National Forest.
Total
0
Shares
0
0
0

Owned at one time by French freedom fighter Jean-Claude Brouillet, this David L. Leavengood-designed Spanish Colonial-inspired residence in Santa Ynez Valley was purchased in the late 1990s by Fred Steck, a retired Goldman Sachs partner who immediately set out to transform the roughly 4,700-acre property into an architectural equestrian haven.

Today, the parcel of land that dates back to the 1800s (when it was part of a Spanish land grant) features a sprawling six-bedroom home boasting soaring ceilings, imported and hand-carved finishes, hardwood flooring, wood beams and French doors throughout, accompanied by a three-bedroom guest house, tennis facility, helipad and show-grade equestrian facilities.

“Rarely does a property of this much privacy and acreage come onto market in Southern California,” says listing agent Neyshia Go co-listed with Aaron Kirman of the Aaron Kirman Group and Hillary Ryan, all at Compass, “and it is only minutes away from Santa Ynez wine country and Santa Barbara.”

Among the focal points is the main residence, which encompasses 13,000-plus square feet of Aimee Weaver-designed living space on three levels outfitted with a 10,000-bottle wine cellar, movie theater, gym, wood-paneled office, and an opulent master suite replete with dual baths, a duo of walk-in closets and private balcony with mountain views.

An expansive patio area next to the home displays a seating area with fireplace, custom pool adorned with boulders for diving and ample spaces for entertaining, while the dwelling’s epicenter consists of an open-air courtyard ringed by a covered, wrap-around patio with a Spanish-tiled water fountain and large barn doors that open to reveal a grassy yard and vistas of the south hills.

Several accessory buildings include a three-bedroom, two-bath guesthouse, workman’s garage and the aforementioned, one-of-a-kind equestrian facilities equipped with a 10,000-square-foot, 11-stall barn, as well as a covered arena, fieldstone watering pools and 8 miles of horse trails.

Also part of the plot: a standalone work-out studio, four-car garage, two private wells and water cisterns, not to mention plenty of untouched soil just begging to be planted with grapes for the future wine-maker.

“There is a feeling of tranquility and peacefulness from the property that is unlike any other,” says Neyshia Go.

“This comes from the beautiful rolling hills, and the fact that 4,700 acres provides such immense privacy that it feels like you are in your own private state or national park.”

Explore Story
Six bedrooms and 11 bathrooms spread over 12,456 square feet: These are the numbers that define 514 Chalette Drive, a property listed for $32,500,000.
0
0
0
Explore Story
Actress Kirstie Alley of Cheers lists her Italianate-style mansion in Los Feliz for $11.97 million. According to Mansion…
0
0
0
Explore Story
From the outside, it doesn’t look like much. According to Realtor.com, this relatively modest two-story Toronto home, decked out…
0
0
0
Explore Story
It’s impossible to discuss the history of Los Angeles without devoting a large portion of the conversation to architect Paul R. Williams.
0
0
0