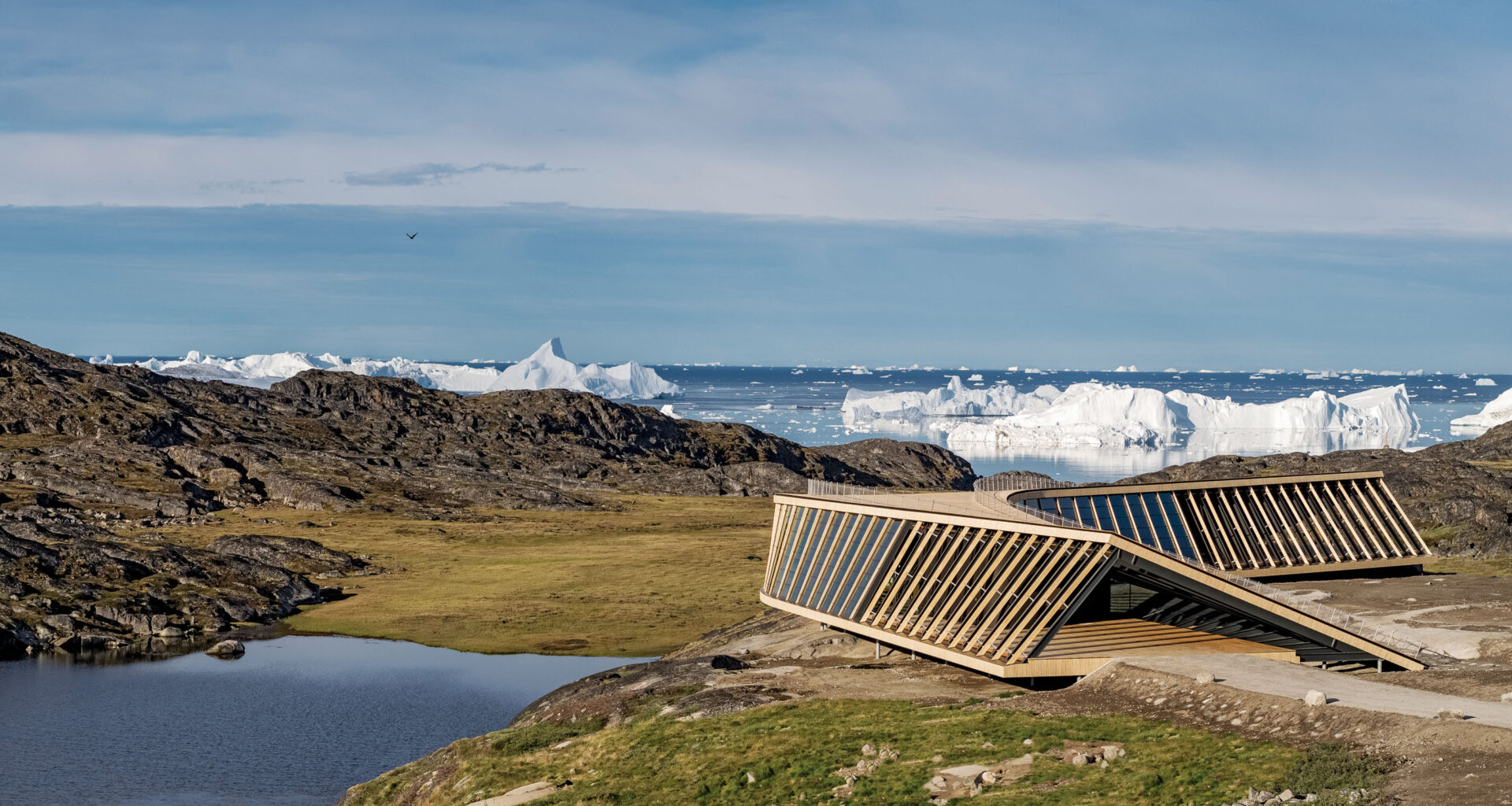 Placemaking is of foremost importance to Dorte Mandrup, the founder and creative director of Danish architecture studio Dorte Mandrup A/S and Monocle’s architect of the year. Her repertoire of highly contextual works includes a growing number of UNESCO World Heritage Sites.
Total
0
Shares
0
0
0

Among these is the Ilulissat Icefjord Centre, an extraordinary framework for exploring the story of ice, culture and climate change in one of the world’s most vulnerable and affected environments. In going to the ends of the earth for this project—about 150 miles north of the Arctic Circle, to be specific—the studio completed one of its most ambitious and socially sustainable buildings to date.

A modern building in ancient terrain, “The Icefjord Centre offers a refuge in the dramatic landscape and aims to become a natural gathering point from which you can experience the infinite, non-human scale of the Arctic wilderness, the transition between darkness and light, the midnight sun, and the Northern lights dancing across the sky,” says Dorte Mandrup of the project, which is insistently sympathetic to its extraordinary surround.

That this hub for education, research and exhibitions pushes the boundaries of contemporary architecture to the absolute extreme is a credit to the reliably nonconforming Dorte Mandrup, an architect suspicious of orthodoxy and sensitive to complex sites, whether it’s a World War II bunker on the coast of the Wadden Sea in Germany, or in this instance, at the mouth of the Sermeq Kujalleg glacier in Greenland.

In what is another effort by Dorte Mandrup to understand a place and put in context, she shaped the structure like a boomerang soaring over the vast landscape. With the elbow of the building cantilevered over a hilltop, the sinuously twisted structure rests on a raised steel frame and presents as strikingly aerodynamic.

Conceptualized as “a snowy owl’s flight through the landscape,” the improbably light-looking building “appears to levitate over the magnificent, rugged terrain—like an outstretched wing gently touching the bedrock,” Dorte Mandrup describes.

That one wonders if at any moment this “wing” might take flight is one of the many intrigues of a space that hovers gracefully, almost wispily, over the ancient Greenlandic bedrock—the oldest in the world.

The walkable roof, meanwhile, was designed to create its own landscape. With overhangs toward the east and west of the building, its purpose is twofold: to prevent snow build-up and create shelter from the snowfall and knee-buckling winds, and to serve as “a natural extension of the area’s hiking routes, leading visitors onto one of the best places to see the massive icebergs—which break off from the largest glacier in the northern hemisphere—in the fjord and the surrounding landscape.”

With echoes of a boardwalk, this gateway to the town of Ilulissat and the vast wild beyond is the building’s connective tissue.

“When the first glimmer of light hits the horizon in January after six weeks of darkness, the community gathers in this area to celebrate the sun coming up for 40 minutes before leaving again,” the studio notes. “The hope is that the roof will become the place for this important gathering.”

In this way, the building is also a map. With sustainability at the heart of the project, Icefjord Centre is highly accountable to the environment. In primarily constructing the Centre around a steel frame with the absolute minimum use of concrete (usually the main contributor to the carbon footprint, the studio explains), the lightweight structure lessened the impact on its age-old foundation. Most of the wood in the project is Akoya (decking on the roof terrace is oak), which lends even more warmth to a space overlooking a spectacle of snow and ice. More significantly it creates a contrast with the bedrock.

Inside the Centre is an open-plan exhibition gallery, café, and cinema, all to inform visitors about Greenland’s nature, culture, and climate. The design environment is of note too. Triple-glazed floor-to-ceiling windows amplify the airy feel of the sparingly touched interior, which is left to breathe and bathe in natural light. The building’s toggle between warm and cold, light and shadow, open and sheltered, is a continual fascination.

In this dynamic ice age for Dorte Mandrup, the Copenhagen-based architect is producing architecture of enormous emotional impact, including her winning design for The Whale, another astonishing attraction north of the Arctic Circle, and the Wadden Sea Centre on Denmark’s west coast, which was shortlisted for the European Union Prize for Contemporary Architecture—Mies van der Rohe Award.

In reference to the Icefjord Centre, she told Louisiana Channel, “We view it as a building that should address our own fragility.” Her point of view has never been stronger.

Explore Story
Expertly reimagined and expanded, this romantic Spanish-style home now on the market in Santa Monica boldly breaks from the norm.
0
0
0
Explore Story
The South Bay’s Salon 1085 brings creative and luxurious intention to its architectural surrounds and service Written by…
0
0
0
Explore Story
The Hanalei district in the North Shore of Kauai is home to epic natural beauty and some of…
0
0
0
Explore Story
Since industrial artist Edith Heath and her husband Brian founded quintessential California pottery Heath Ceramics in 1948, the…
0
0
0