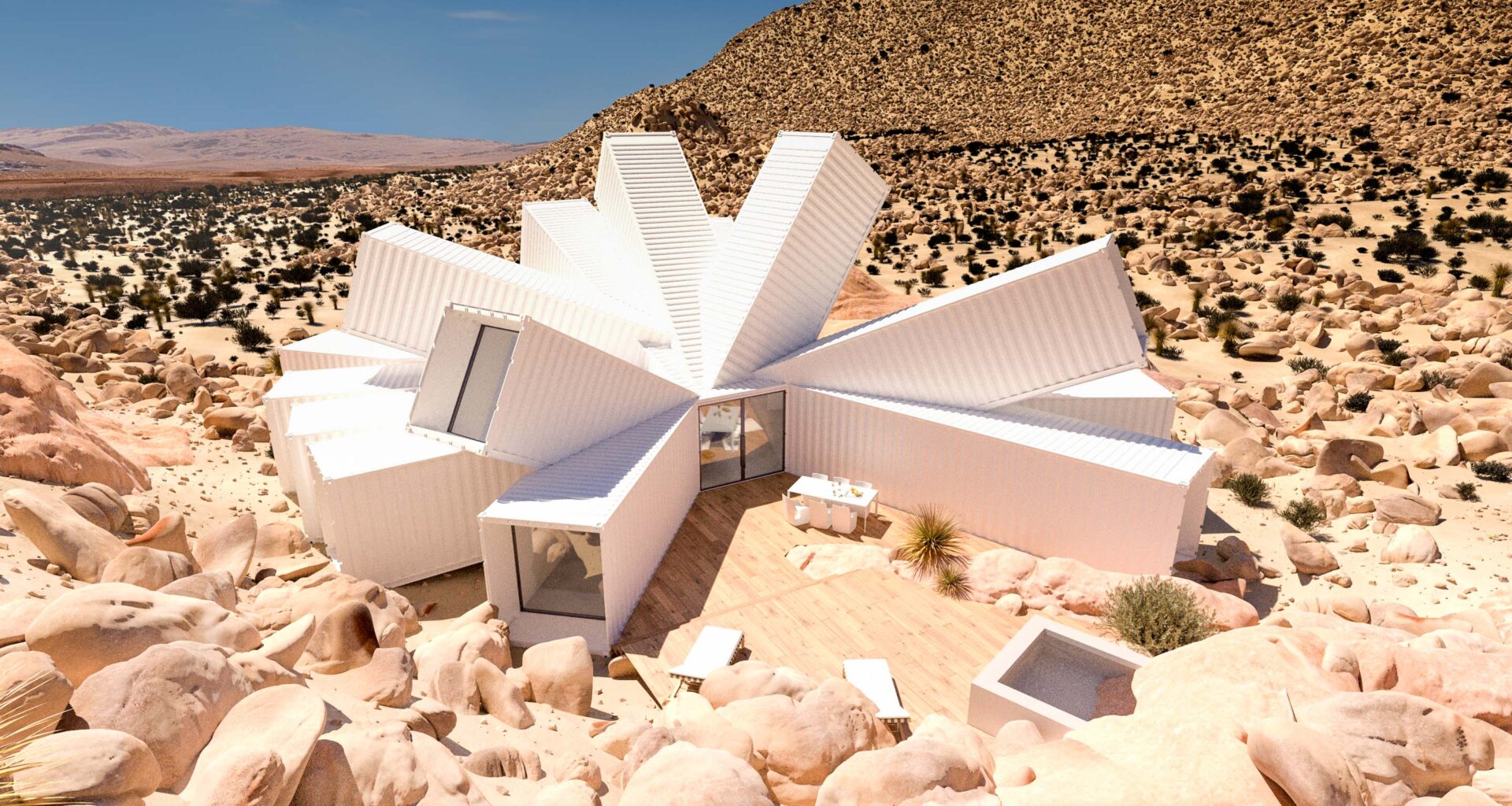 One is forgiven for thinking this design hails from a Hollywood backlot—its owner, after all, is a film producer. But this is no set piece from a sci-fi picture, though it is a blockbuster, a genre-breaking design by architect James Whitaker of London-based Whitaker Studio.

“In the spring of 2017, my client in LA had some friends visiting and, having a little time to spare, they all went on a road trip to visit the client’s plot of land in Joshua Tree,” Whitaker remembers.

“Whilst there, amongst the arid landscape and jutting rocks, one of the friends said, ‘You know what would look great here?’” She opened her laptop and showed the group a photo. “The picture was of an office that I’d designed several years ago but had never been built,” says Whitaker. The next time the client was in London, he rang Whitaker and asked to meet up.

The meeting would result in the Joshua Tree Residence, a structure made from shipping containers that fan out from its site on a mountainside where it nestles into the landscape close to the national park. “Each container is orientated to maximize views across the landscape or to use the topography to provide privacy, depending on their individual use,” explains Whitaker, noting that the car garage is roofed in solar panels to provide power for the house.

The material palette—walls are painted white plaster, the floor is polished concrete—is deliberately simple to make way for “the main event.” The shipping containers and the space they create. “Everything else is secondary to that,” says Whitaker, explaining that each container is positioned to frame views out across the landscape or use the topography of the land to screen the house and provide privacy; those pointing skyward minimize direct sunlight while connecting each space with the outside. “Really this is what I enjoy the most about this project, the taking of something highly generic and transportable, and turning it into something very unique and site specific.”

The design represents a new architectural frontier, but for Whitaker it’s merely work. While he admits to having “no appetite for producing the same stuff as everyone else,” he does not consider his work experimental or conceptual.

He starts with the fundamentals of all good architecture—the views, how it feels to be in a space, how light reacts with form—then expands his thinking, which in the case of this project was to consider, “how can we re-purpose this into something that is unique and original?”

Did Whitaker see this architectural comet coming? “Not at all. I had no idea that it would have such universal appeal,” says Whitaker, who will need the entirety of his architectural references—including Herzog and de Meuron, OMA, John Pawson, Frank Gehry, and Richard Rogers—to complete a series of new projects from an office building in Spain, to the master planning of a new town in the Caribbean, to a house project in Iceland. He’s done the desert, why not ice?

Explore Story
Andrew Kotchen and Matthew Berman, co-founders of Manhattan-based practice Workshop for Architecture, Planning and Design (Workshop APD), who since the debut of their firm, have practiced a clear wholistic approach.
0
0
0

Explore Story
Spread over 25 acres, AutoCamp Joshua Tree comprises 47 Airstreams, four accessible suites, and four X suites—with outdoor showers in some premium units and with HVAC systems in all of them.
0
0
0
Explore Story
L.A. homebuyers opt for the volume and grandeur of lofty, ornamental ceilings Written by Wendy Bowman | Photography…
0
0
0
Explore Story
This stunning new contemporary abode is sleek and sexy as it is warm and comfortable “This home is truly…
0
0
0